[Poll At The Bottom of Comments][FE8][Completed, 26 Chapters and a Mini Route Split] Touhou Emblem ~ Not The Reskin!

alright, so it turns out i’m actually just dumb, and i don’t even know my own hack anymore. there’s no support limit

THE PEOPLE HAVE SPOKEN

AND AS IT TURNS OUT

DEMOCRACY WAS A SHAM THIS WHOLE TIME

On a more serious note, due to the high amount of support for both the top two options, I’ve decided that I will implement both, which will probably be the last significant update for this game oh no i lied about gaem being 100% complet. thanks to the help of my bois Telos of Telos’ Hack Reviews, and S_G, I’ve been making progress on improving the earlygame, and I can’t thank them enough for that.

Telos Shit Or Whatever

I shat my pants

Ehhhh… Idk about that one chief.

In all seriousness though, good luck!

We’ll see. I plan on releasing this last significant update after gameplay_overhaul.png

So, it’s been about a week since I last made an update, so I guess I should let everyone know what’s popping.

Thanks to the help of my bois Telos and S_G, I’ve made some very big strides in terms of figuring out balance and fixing up bugs and stuff.

Now for the actual new content stuff. So far, I’ve made a bit of progress on designing the replacement units, although that’s probably going to take a bit more time as I figure things out

Reimu and Marisa also get new prfs at the end of the game, isn’t that nice! 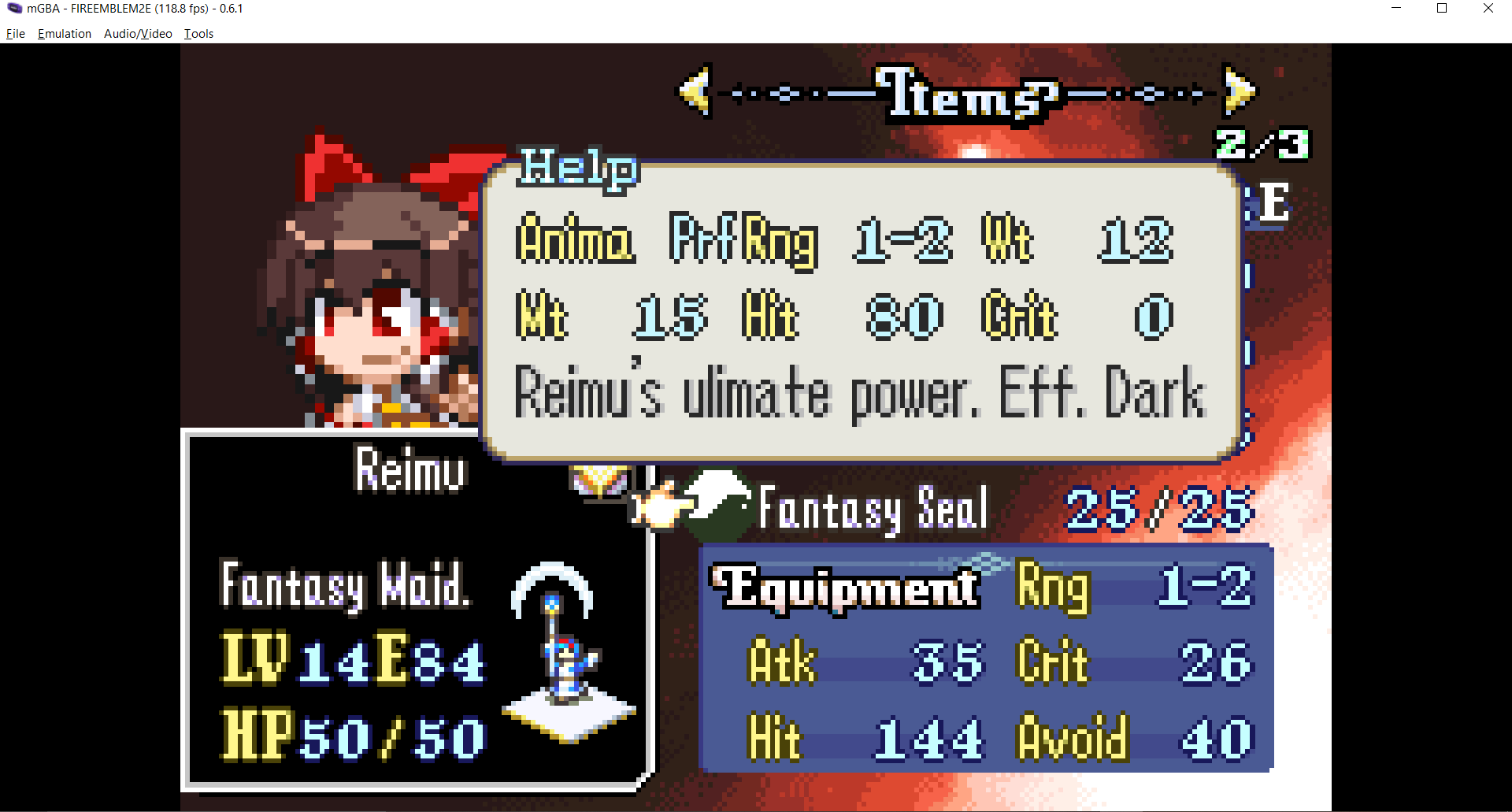 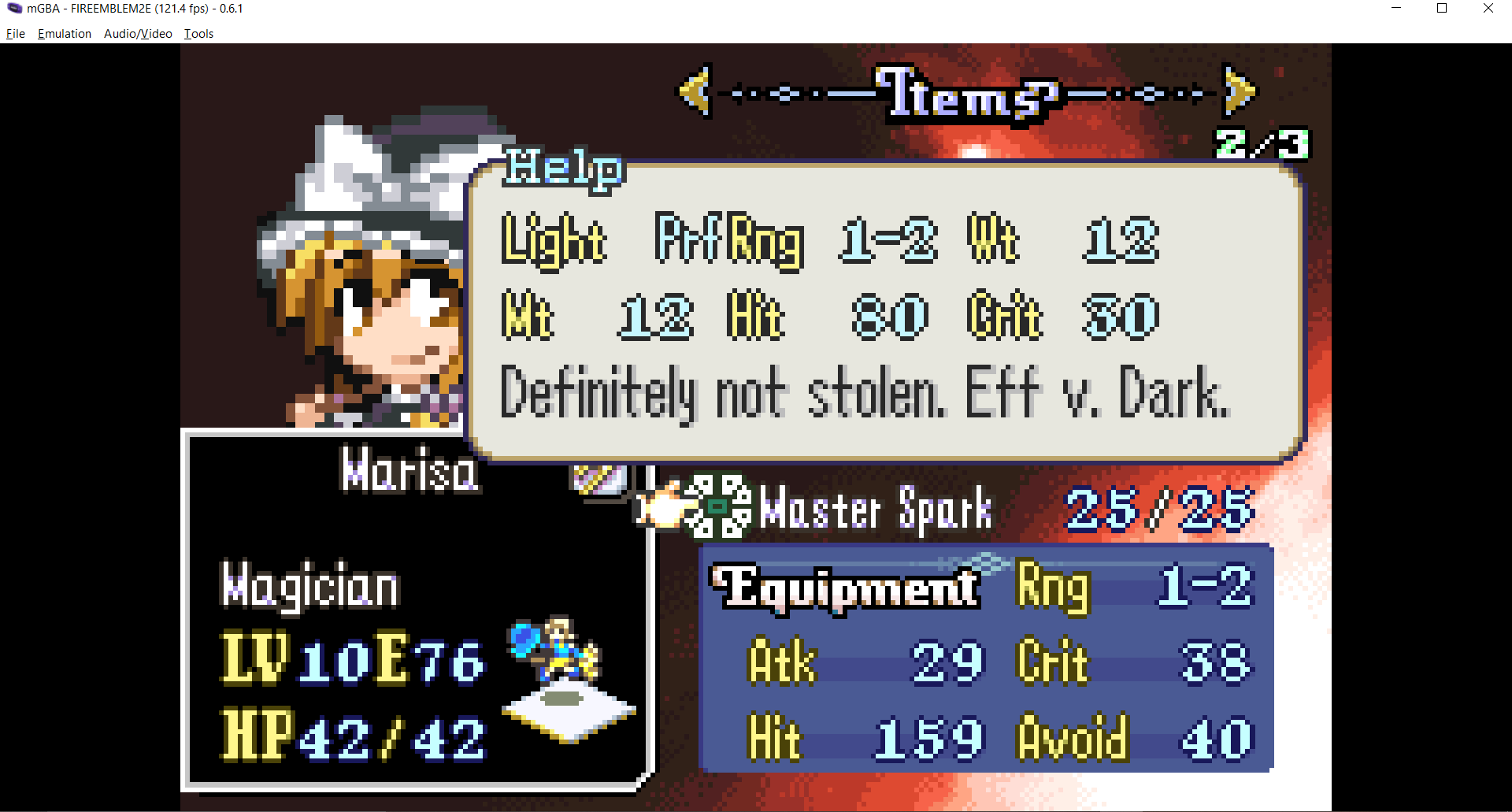 In exchange, Reimu and Marisa’s original PRFs have been changed to Sealing Needle and Orreries Sun respectively, although this does not change anything statwise about these weapons, just their appearance.

As for when I’m getting this all done, that’s up to my discretion when I think it’ll be ready, so we’ll see.

Update: I GOT THE REPLACEMENT UNITS SYSTEM WORKING!

Thanks to the work of Shuusuke, who updated a certain patch that allowed me to do some random bullshit, I’ve managed to get a replacement unit system working! (kinda)

After certain chapters, if you’ve met a threshold on dead units, you will get some replacement units so that you stay afloat. They’re generally pretty good for that point in the game, so it’s a great way to get you back up.

These replacement units will generally be the previously unrecruitable bosses, so nobody can blame me for not including their favorite 2hu as playable! 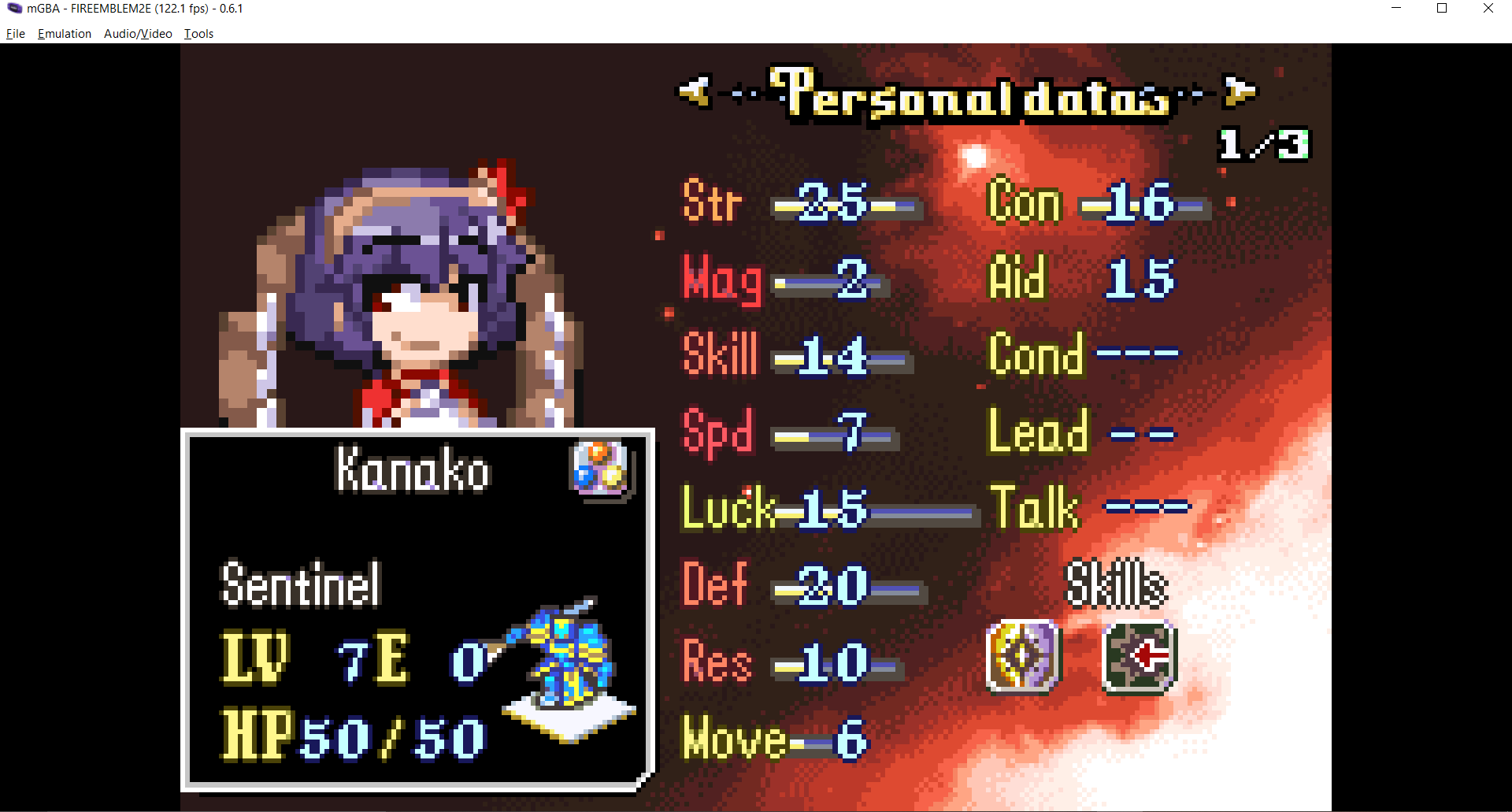 Ofc, there are still the four characters I haven’t added yet. I’ll get them done and add them as replacement units in certain chapters as well, so look forward to see where and when they show up!

There’s still quite a ways to go until I can consider this whole shtick done, [Girls are being put through endless cycles of torture and anime chess, please be patient…] so I hope you’ll look forward to when I drop a new patch!

Ok bye I have other responsibilities to tackle too lolw

Take your time the make it

Some bugs to report, Alice can infinitely summon her dolls even if one is on the field, which means infinite exp farm.
ch.14 is soft lock for me since the reinforcement won’t stop coming. That’s all so far.

Nvm, i managed to get through chap 14, although i dont think those mercenaries dropping a restore staff each was intentional?

Alice being able to infinitely use the summon command isn’t intentional, although I was kinda too lazy to fix it at this point and it doesn’t really affect the bottom line of balance at the end of the day for me. I’ll get the restore staff mercs fixed soon. I’ve been overlooking a couple of bugs as of late cause I’ve been working on that final content expansion. 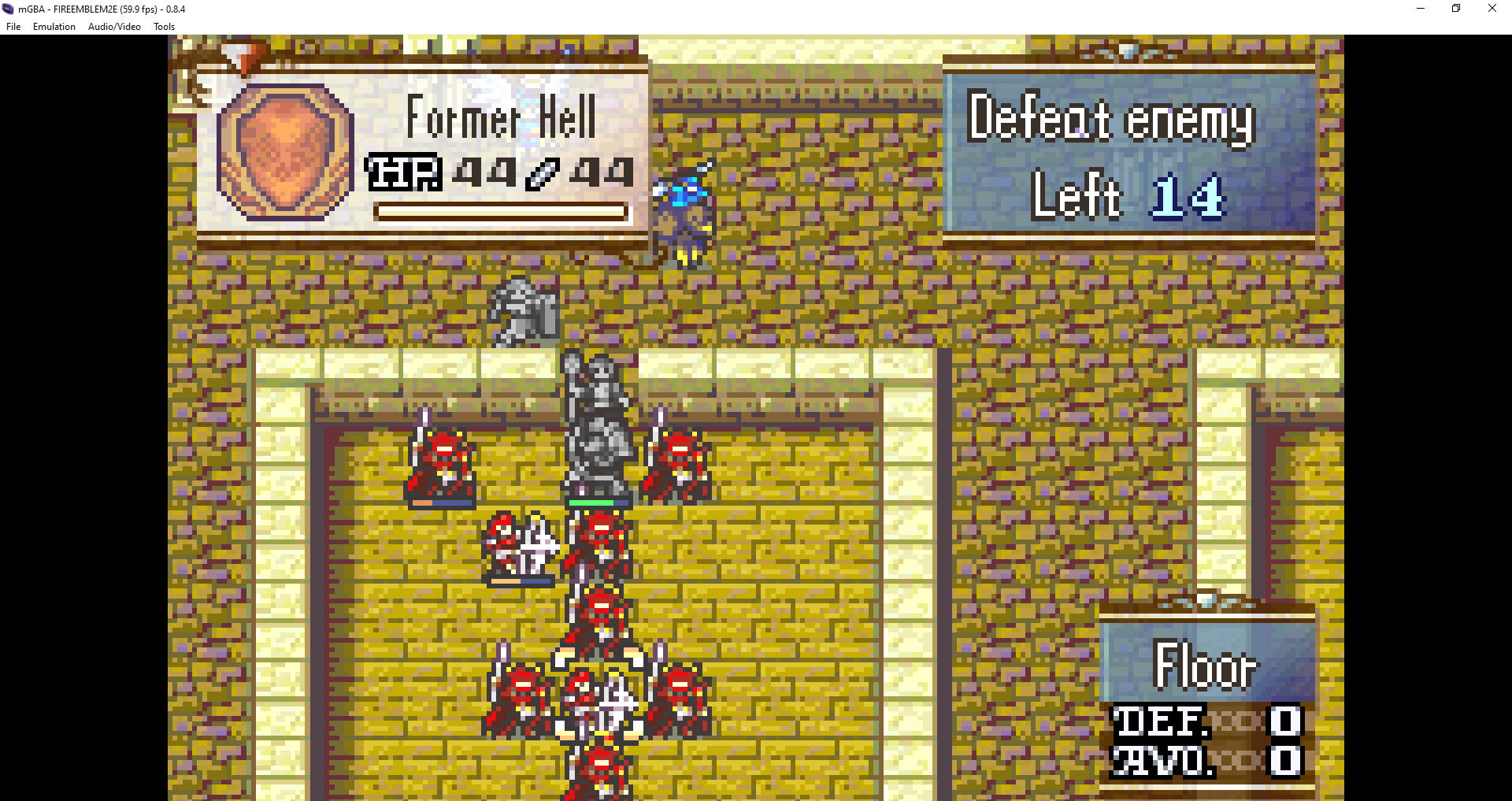 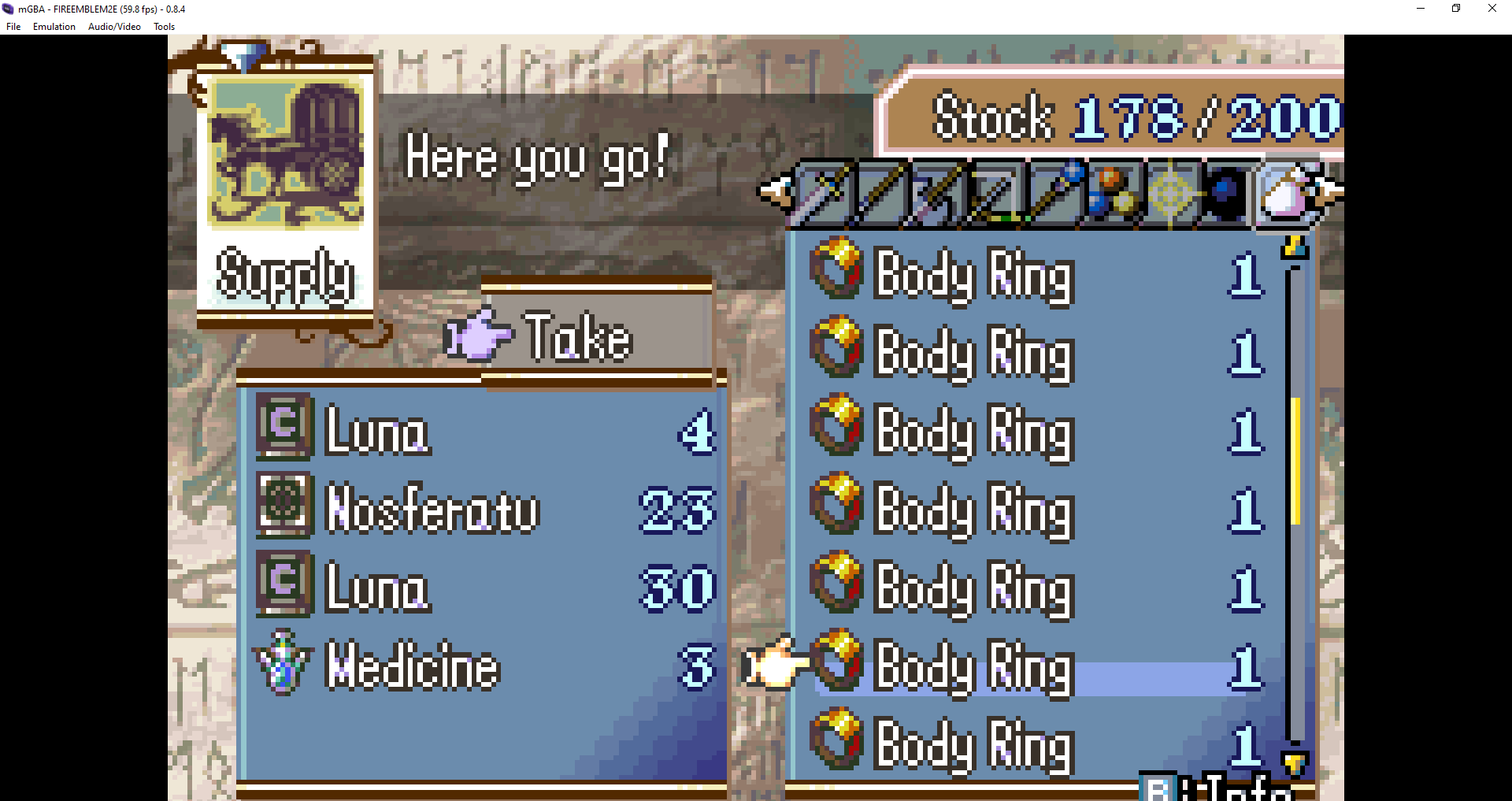 Yw for the infinite healthcare

thing is that the patch also includes all the extra content that i was gonna add in anyway so i guess that’s an early(?) release of the final major content update?

this won’t affect your gameplay too much if you’re already past chapter 21.

guide’s been updated w/ the extra new units i’ve popped in, so go look at that ig

i offer no assurances on the new content being stable, but this shouldn’t affect your bottom line

https://imgur.com/a/ht7GRfm
so route split glitch, I picked Soga and for some reason I’m on the route where I fight the taoist.

is this w/ or w/o the latest patch? i gotta check over my eventing again now