Hi everyone! I’m here to share my first ever Romhack. It’s a pretty simple one, but we all have to start somewhere!

I recently downloaded FEBuilder to play around with, and the first idea that popped into my head was adapting @Xetetic’s very amusing “Oops! All Amelias” concept to my favorite FE game, Binding Blade.

So I present: Oops! All Sophias!

It’s exactly what it sounds like. FE6, but every character is replaced by Sophia. This means that they are all Shaman/Druids with Sophia’s portrait, and they all have Sophia’s growth rates. Each character’s bases are Sophia’s bases autoleveled to whatever level the unit joins at*. Each characters weapon ranks are translated into dark and staff ranks. Affinities and supports are unchanged, however.

I changed the dialogue for a few villages to reflect the fact that they’re now giving you a tome instead of a sword or something, but for the most part, the story is identical to the original game, and does not acknowledge at all the fact that everyone is Sophia. Characters also have their default palettes, some of which look good as shamans and some of which do not. I don’t recommend playing this hack unless you’re already pretty familiar with FE6, because it definitely makes life harder.

I have played this hack through to the good ending on Hard Mode, so while it’s definitely a good challenge, I know that it is possible to beat it without rigging (you probably have to accept some deaths in the early chapters, though). It was also a lot more fun than I expected a mono-class run to be, although your mileage may vary.

Hard mode is unlocked from the start if you want to challenge yourself.

Big thanks go to:
-Gringe and co. for the original translation patch this is built on
-Xetetic for letting me blatantly steal his idea.
-The folks in Mekkah’s Keep who enjoyed and commented on my playthrough of this hack and encouraged me to share it.

Link to the patch (apply to a clean FE6 ROM): Dropbox - OopsAllSophias - Simplify your life 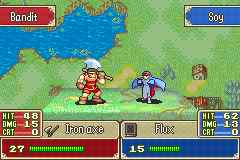 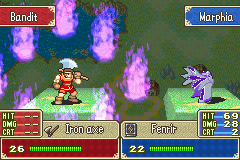 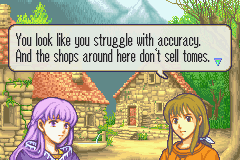 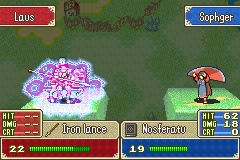 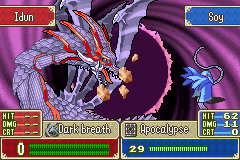 *The way that this works for prepromotes is a little bit complicated. Instead of uniformly assuming level 15 promotion or something, the level that a prepromote Sophia is assumed to promote at scales up over the course of the game, in an effort to make all of the prepromotes at least temporarily useful. Marcus!Sphia is a 10/1 Sophia, while Karel!Sophia is a 20/19 Sophia and everyone else is somewhere in-between. Specifically, the level that a Sophia is assumed to promote at is round(joining chapter/3)+10, where joining chapter is the chapter number when Gaidens are included. Thus, Garret!Sophia, joins in chapter 15, which is the 18th chapter including Gaidens, so she is a 16/1 Sophia (and she gets hard mode bonuses on top of that!)

No Idunnphia. Bad hack.
Just joking, this looks like a nice memehack. Though the choice to keep the original palettes is kinda odd.

Original palettes was more interesting than making everyone look literally identical, IMO. And I don’t have the artsy knowhow to make new palettes designed to look good as shaman/druids. It also doesn’t make too much of a difference, because it doesn’t take too much time playing a game where everyone has GBA dark magic animations before you turn animations off

I never thought my meme idea for a series would be enjoyable to others, let alone an inspiration! I’m glad you found All Amelias enjoyable enough to watch to do All Sophias for FE6 for yourself. Nicely done!

I did think about changing the names for supports/dialogue. But since they’re hardcoded into the script instead of referencing the character’s name string, it would have required manually going through every single support and editing the text, which was too much work for a bunch of text that probably nobody is going to read.

It is kind of funny to see some of the standard dialogue coming from Sophia’s mouth, though, and to watch her talking to herself as if they look completely different.

I found a way to search through all the game text in FEBuilder, but it doesn’t seem like there’s a way to do a mass find and replace? As I said, though, I’m very new at this so I might be missing something.

Export it as a .txt file and do find replace with something like Notepad, and then import it.

Find/replace usually works, but a few select characters in the series tend to have names that come up in common vernacular. Examples include Lot and Guy. I don’t know if these will cause specific issues or when they would, but I think I’ve had similar results in FE8, probably with someone like Dara or Riev.

To minimize damage, make sure to check that you only change the capitalized forms. No doubt “Lot” will give you a lot of trouble still, assuming your translation starts any sentence with “Lot”, even if the word used is “Lots”. Although, I suppose “Sophias of people come to the Western Isles” is plenty funny. (note: cannot confirm this as being a real line)

For characters like that, one’s better off swapping them individually.

Currently doing a Hard Mode playthrough of this hack! I wanted to try it out of curiosity but it turned out to be very, very fun.

If you’re still up for fixing it, Geesephia is not recruitable in chapter 11A. She starts north of the village and gets trapped between it and the river, unable to talk to Soy and in a zone you cannot reach.

Glad to hear that someone besides me has actually enjoyed this silly little hack enough to do a playthrough ^_^.

Geephia is technically recruitable in 10A, but you have to sacrifice the village to do it. Once Gonzophia destroys the village, the ruin tiles are walkable. If I get around to making an updated version, I can move her spawn point to below the village for easier recruitment.

Ohh, I see. That’s clever, actually. Since Gonzophia is a shaman and not a brigand, I didn’t think she’d be able to destroy the village at all (and yeah, I meant 10A, thank you). I actually tried to go B route but the brigand reinforcements threatened my flock of Sophias and I had to “LTC” chapter 9. I’ll see how it changes in a future playtrough! ^^

I find it funny how such a meme idea actually makes for a nice experience. The first chapters are hell, but duable with Marphia soaking some hits and the rest ganging up to get kills if the (s)hitrates allow it. It kind of reminds me of the prologue chapters for FE12 from Hard 2 onwards.

From that on it’s very, very fun: the promoted and trained Sophias kind of keep up with the enemies speed and one-rounding is a rarity, so it incentivices use of terrain, supports, choosing which Sophias should focus on building staff rank, etc. Nosferatu being plentiful is a great emergency tool if any of the Sophias in the frontlines gets one-rounded, and in general is difficult but not unbearable and definately feasible without save-scumming.

It also makes me appreciate some perks of Sophia you wouldn’t notice as much in the base game, such as her very high resistance stat (which is quite a saving grace against seige tomes and status staves), how easy is to traverse chapter 14 and how difficult enemies such as generals and manaketes are mincemeat even without using the Apocalypse tomes.

Also some of the village rewrites are very funny. I lost it at the village in chapter 2 saying something like “I know you have it rough with hit rates girl, that’s life for ya”. It’s been such a charming experience so far, I’m at chapter 16 and will continue playing it to the true end. Thank you for this!