I mean, if it’s playable anyway and you don’t feel like doing it, then don’t.

In the final battle & the final boss chapters, I can steal the Blight’s blessing from the boss, raising your character’s stats by 50 pts each. Maybe it should be fixed?

Already dealt with WAY before hand.

Hello, so I came across this issue with Bae’s team at the very beginning of the 2-Boss chapter. After the message pops up talking about the objective of the chapter, the cursor points to every unpromoted units in Dori’s group and everyone in Bae’s team, and it showed them getting a Master Seal. However, when I check every unpromoted unit’s inventory, everyone except Bae has a Master Seal. Is this supposed to happen to Bae?

Yes. Bea has a story promotion.

For those who want the side project, HERE YOU GO!

This is my attempt at a boss recruitment for Fe8. I played ArcherBias Fe7 Boss recruitment and I had fun with it, so it gave me something to try to make for FE8. I hope people will like it just like ArcherBias Fe7 one. However, I made a few adjustments to FE8 to set things a bit differently. Change1: Marisa now has buffed growths, bases and weapon rank is now c to make her a viable choice over Joshua if you need another myrmidon. Change2: I boosted enemy growths by 15% to make the game sli…

Okay, thanks. Was kinda weird since the cursor for the Master Seals pointed to everyone in both teams except for Dori. Might want to maybe edit that part so the cursor doesn’t point to Bae, only the others unpromoted units.

And as for another note, since I am in Part 2, I don’t think I can recreate this again. But apparently, after receiving the Elsleep Staff during the chapter where you have to rescue the Bishop and Halberdier, I did have one of my staff users use the Elsleep Staff on one of the enemy units. When I used it, I encountered some pretty weird texture glitch with the map, and the same amount of spaces that were glitched by the Elsleep staff follows as I move around the map.

That happens all the time. Just click on a unit of any faction at least 2 or 3 times and it will leave.

Just wanted to know, is Mio’s speed growth rate actually what’s shown on her sheet, or is it actually higher under the hood ? 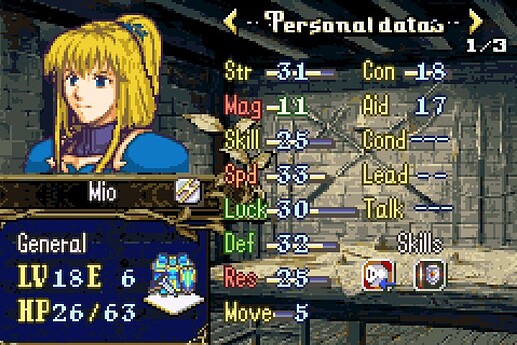 I think it is more of a blessed Mio you got there.

I have a question about Chapter 1-4. I’m not actually expected to rout the entire map’s worth of enemies, am I? Because this is far too much to handle with the party I have available to me, even with the help of the ally units.

Yes, you have to route the map.
You do have a LOT of time to do it, so you’re not in a huge rush.
Besides, the green units can clear half of the map pretty easily so they do help in some regard.

Hello i’m new here and i just played your hacks it’s so amazing i love it but one question do you still update this or this is already completed?

He’s got an update planned but hasn’t released it yet.

Like in the 1-2 I just realized that if you let the (yellow boy hair bandit) escape he will have a dialogue with their bandit leader and you will get a master seal.

It is best to promote asap with master crown?, or I should get more levels, maybe level 15?

You will need the best stats possible for the late game.

Hey, I don’t know if it’s intended, but I can steal blight blessing from Iustitia with Kane, so… very easy boss.

Problem already fixed.
Update for these will be paired with the contract mode.