How to break the normal HP cap

1 Like
[FE7] Attempting to break the Signed HP restriction
Getting Started
The Grand Library of FEU [UNDER CONSTRUCTION]
Arch June 1, 2014, 4:30pm #2

Someone named Lodestar over on FEShrine reverse-engineered some FE7if shenanigans trying to fix this too.

Credit to FE7if for this.

Pretty much I was curious on why the life resets when we change it but the people in FE7if somehow made it work without resetting. So… I went to FE7if’s code and went to these three locations:

I found it was quite different from the usual FE7’s code and copy and pasted it into a normal FE7 rom. Changed Lyn’s life to over 60 and tested it. It worked! Making sure I reset the game and found that Lyn’s life stayed the same at 120. I tested it on an NPC and it worked the same!

With this it all should work and all your units can have over 60 life. Unfortunately this will make the cap 120, not whatever you want.

Ctrl + G the Yellow part in HxD then Past the offset >>Follow the instruction.

I did exactly what this tells you to do. Setting the Byte of HP max at 50 ( 80 in Hex ) Then Modified the angelic robe’s bonus up to 50 HP

I used it in game and it works perfectly. Kept playing few chapter and everything still works.[/quote]

This is confirmed to work in FE8. Credit goes to Solum.

I’ve been playing with this and found there are a few issues on the FE7 end regarding the Luck and Resistance growth in that they won’t trigger regarding Lodestar’s method. 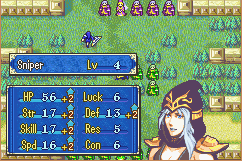 Huh, interesting; I feel like I ran into the same issue myself but I never bothered to check

also hnnnng ashe don’t look at me like that, i liked using you too times have changed ;( 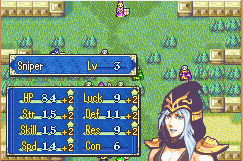 However the top method works fine and won’t alter the other growth rates.

Maybe I can check what routines are actually altered by Lodestar’s thing. Does anyone actually know what he changed.

I don’t think so, he just looked at the locations that alex found in FE7if’s rom to and copied them over to an english fe7 rom.

Edit: Checked your 3 locations… they seem all right and like they would affect luk and res…?

idk it might have to do with the things that lodestar posted into the locations?

I don’t know myself

Ported the FE8 solution over to FE7: