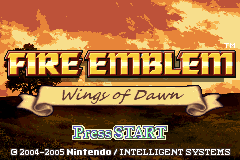 Hello everyone. I’d like to share my first go at a hackrom, titled Fire Emblem: Wings of Dawn. This is a hack of FE8U created in FEBuilder, and the current build contains 13 fully playable chapters out of a planned ~30. This is a gameplay-focused hack which aims to capture the magic of old school Fire Emblem, and draws much of its inspiration from the Kaga era.

Thanks for checking out my hack! This project has not received any outside playtesting so I could definitely use some feedback. I appreciate anyone who gives it a go in its current state.

Played through a bit of it, but I just wanted to report a bug in Chapter 3. The command used to load in blue units doesn’t account for dead ones, so any dead units will load back in which leads to some jank. Otherwise, hack has been solid so far, and I’m looking forward to playing more of it.

I personally prefer to play past unit deaths, only tending to reset in the most dire of circumstances or when I lose a favorite unit, and the hack is designed to accomodate this playstyle. The cast is large and units generally can contribute effectively without investment. Growths are relatively low, allowing units to come off the bench a few chapters after joining and still make an impact despite missing out on level-ups.

sounds dope, looking forward to trying this. hope to see this at FEE3!

Played through a bit of it, but I just wanted to report a bug in Chapter 3. The command used to load in blue units doesn’t account for dead ones, so any dead units will load back in which leads to some jank. Otherwise, hack has been solid so far, and I’m looking forward to playing more of it.

Thanks for the report! Seems I used the wrong load command. It’s (probably) hotfixed now.

sounds dope, looking forward to trying this. hope to see this at FEE3!

Thanks! I’ll think about FEE3. I’m not really comfortable recording anything myself, but perhaps I can work out some kind of exchange.

Hugo is not able to use Iron Blade despite having D rank in swords. Are Blades locked to cavs or is this a bug? Also, nice smorgasbord - or rather, smorgåsbord as it should be written - of Finnish / Swedish names.

I’m not really comfortable recording anything myself, but perhaps I can work out some kind of exchange.

There’s a good amount of people who are volunteering to record others’ projects, I’d recommend checking out this thread: FEE3 2022 Help Thread

Really interesting hack, I’m looking forward to play it in the future.

Hugo (and Sanna) only use swords while dismounted.

The dismounting stuff is an experiment that I’m seriously considering removing altogether. In its current state it’s kind of confusing and I don’t think it adds much.

Updated the patch to remove sword rank from the weapon rank display for the aforementioned units until they take their dismounted forms for the first time.

I’ve been reasessing some of the early chapters and I’ve decided the early game is more difficult and punishing than I would like, even for hard mode. Part of this is an unintended consequence of injecting some chapters into the early game (notably chapter 3), which makes the cast size build more slowly than it used to and consequently rather heavily punishes early losses. I’m looking into dialing back the difficulty of Ch. 3-6, adding an additional recruitable or 2 in this section, and/or shifting a unit or 2 to join earlier.

I’m trying to strike a balance. On the one hand, the early game is an opportunity for uniquely tight design because as a designer one knows more or less precisely what tools the player has access to. But, I also want to make sure I don’t stray too far from the hack’s philosophy that it should be playable even if units are lost.

Anyway, I’ve updated the patch to move to tone down Ch. 3’s difficulty (this chapter was kind of egregious on release lol), move the first heal staff drop to Ch. 3 (adding Ch. 3 unintentionally stretched the first heal staff pretty thin), and make a few other small balance changes included in the change log. I’ll be making the updates I alluded to above fairly soon. I’ll also re-emphasize that this project is still very untested (and it seems releasing a project is a pretty good way to suddenly realize everything that’s wrong with it).

I plan to add normal mode back in once I have a better sense of where hard mode is situated. Thanks to everyone that’s downloaded so far!

Otherwise, hack has been solid so far, and I’m looking forward to playing more of it.

It took me a bit longer than I expected to play and write up the feedback post, but I played up to Chapter 12 so far and will probably stay there for now, since it seems like a good place to pause until more chapters are released. So far, I would say it was a good time that definitely invokes some of that old Kaga game feel. I’ll admit that I’m not super tuned into each story beat and what’s going on there, but given it’s not a large priority, it works well enough, and I don’t have much feedback to give there. The following feedback is all gameplay-related and put into drop-down sections because there’s a lot of it

Despite any criticisms I may have here, I really do think the hack is neat and has a lot of potential, so I’ll def be keeping my eye on it as it develops.

Thanks so much for the detailed feedback! I can’t overstate how valuable it is to get some input from someone who isn’t me. I’ve been second-guessing a lot of my decisions lately and reading this has helped to ground my thoughts.

I should also mention that I’ve been working on an update that should be released by the end of the weekend. It’s primarily geared towards making the early game less punishing (in line with what I alluded to above) but it should also address a few of your overall ideas (including the weird bow wlv stuff).

I’ve had similar thoughts regarding exp rates, and in the update I’ve nudged exp rates up a touch. You make good points regarding the prepromotes too. I kind of like the idea of toning down the prepromotes so that their main edge is early access to premium weaponry rather than blatant statistical advantages.

I’m not sure about master seals yet – I moved the level up to 15 since 10 feels early for a no-drawback promotion, but I’ll have to play around with it as I design more chapters. Another idea is to keep promotion available at 10 but limit master seals to prevent everyone from promoting immediately, but I’m worried that could feel a little bad.

Chapter 6 has been toned down significantly – I’m a little embarrassed that I released it in such an over-tuned state. It’s still my least favorite chapter in the hack (I’ve developed a similar bias against defend since I started this project; unfortunately past me was a big fan

), but it should be less frustrating now. I’d definitely consider it the top candidate for a total rework down the line, but I’m going to prioritize new chapters for now.

Good points re: Ch. 10 also. I’m a fan of the Kaga forts which really feel like impenetrable strongholds (this one is inspired by Fort Dandrum from FE5, actually), and I want catching the thief to feel a little ”puzzley”, but I think the overlapping (physical) ranges are a bit excessive. I don’t really like that Maj is not particularly useful in a map which should really be showcasing her prf.

I’m a big fog fan (bff?) myself, but I empathize with the general dislike for it among the fanbase. Testing fow maps is pretty hard, since as much as I try to put myself into the mindset of a blind player, I obviously can’t just forget where everything is. I like the idea of putting the torch on Antero, and I’m not opposed to increasing the vision radius in 9 and/or 11 (or the vision radius of the Tellius torches).

Ch. 3 should be more doable now that there are some new friends available in the update. I want to redeem rout haha.

Glad you liked Ch. 12 – it’s a personal favorite of mine (I also like ports and escape

Thanks for the unit reviews – really helpful in assessing what kinds of adjustments to make. I’ve certainly struggled with unit ”sameyness”, and my attempts to really break the mold (eg. Niilo, Antero, Teemu) have had… mixed results. I think you’re right that increasing stat/growth variation between units could help, particularly for same class pairs like Heta/Jaakko. I do find it funny that I accidentally made really mediocre cavs despite not entering with an anti-cav agenda.

I like Kalle’s early join because it can be kind of frustrating to play without a second healer for certain maps, and Linnea is pretty fragile and easy to lose. He’s meant to be kind of a Linnea backup, with the ”niche” of having actual combat parameters on promotion and more durability as opposed to being a walking heal staff. Perhaps a minor buff is in order so that Linnea v. Kalle is more of a real decision if she is alive.

Thanks again – this is all really helpful! You’ve given me a lot to think about.

I posted an update. It includes several balance changes, primarily to the early chapters, most notably adding a couple of early recruits. It also adds back normal mode: it’s pretty lazily balanced (mostly just hard with fewer autolevels), but it should be playable.

Also – dismount’s gone. I still think it’s a fun mechanic, but I couldn’t get it to work effectively in WoD, and I found myself gradually stripping it down over time. I think it’s best not to try and force it into the project.

Oh hey we’re live! Big thanks to BigMood for the assist!

Unfortunately, I don’t have any new updates at this time, thanks to a pair of very busy months in the ”real world”… I’ve drafted up a few new chapters, but I don’t want to release anything until I get a little further, with the current plan being to release an update once I hit chapter 20. I’m not setting any specific timetables because that never seems to work out, but I’ve been enjoying getting back to hacking once again. Watching the other showcases has me inspired

Shout outs to all the classic Fire Emblem fans in 2022, and happy FEE3 to all! Stay tuned for future updates coming soontm