Inspired by the Fire Emblem 8 - Route Fusion hack by Merpin and caused by a request to make Hector-exclusive maps accessable in Eliwoodmode, I present this neat little thing. 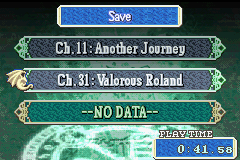 This should work without issue because I tested it pretty thoroughly, but knowing my luck, there were some fundamental flaws that I did not catch somehow.

Bugfixes: A Glimpse in Time was accidentially still blocked from appearing in Eliwood Mode

Whistle, well, wasn’t that a fast response to my request? Me gonna love this XD

Thank you very much, I’ll be testing it ASAP.

Question: The Transfer Data menu appears completely empty. Is it an error, or does it unlock after clearing the game or something?

I have no idea why it appeared while hacking, honestly. It just kinda did. The items in there are determined by the savedata, not the rom.

Yeah, I used a savegame from the normal rom and the transfer menu works normally there. That works for me, though. Sorry for the bother.

I played Talons Alight just fine, but I couldn’t access A Glimpse in Time despite managing to kill Kishuna. If I recall correctly you need to raise Nils at least to Level 7 in Lyn’s story to get to that one, right? For the record, I got him to level 8 by Chapter 10.

I actually made it so that only beating kishuna gets you into the chapter. The issue was that I forgot to remove this tiny little command in the endevent that checks for hectormode and kicks you out otherwise. Oops. Fixed patch will be up shortly.

Checked and confirmed. Thanks very much

Reporting another bug: in Kinship’s Bond, Eubans and Heath’s portraits don’t disappear after their conversation ends, and they’re still in the background while the action shifts back to the heroes.

Doesn’t interfere with the game, but I still feel it kinda weird. So far I’ve finished Eliwood Normal Mode and I’m halfway through Hector Normal Mode without a hitch.