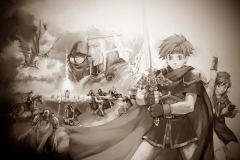 This project has been well over 10 years in the making (no joke)! All in an attempt to add a little extra polish to the original Binding Blade. Let’s be honest, out of all the things I could have put my time into, I decided to finish off a project that has been left on the shelf for far too long - and that has 1000 other spiritual successors in the works. Crazy - I know!

So, what is The Binding Blade+ (FE6+)?
FE6+ is a port of the original Binding Blade over to the newer FE8 engine. The hack features all the modern conveniences of a mod built on top of FE8. All this comes alongside improved graphics and minor gameplay alterations to help improve your FE6 experience. For the most part, FE6+ remains faithful to its origins. Where changes have been made, they try to stay faithful to the spirit of the original game.

What changes have been made?

Now - let’s not get anyone’s hopes up. The project isn’t finished per se; however, we are certainly on the home stretch.

I’d put a tentative estimate of an initial release before the year is up - with a potential additional update later on adding a few of the planned features I’ve cut along the way.

So, why publish this now?
To give the project (and myself) some closure. Honestly, I really hope that others continue with their remakes, ports and mods around the Binding Blade. This was mostly made as a fun personal tribute to the Fire Emblem game that holds a special place in my heart. I will release it eventually and, when it does, I hope those who wish to play will find as much joy in revisiting Elibe as I did in creating this project.

Holy fuck Batman, are you seeing this shit?

the og is back

Oh nice, I’m interested in seeing this finally finish and release. The screenshots look nice so far, though it feels weird to me to think that fe6’s battle screen ain’t being put to use. Still, looking forward to release, I wish you good luck

I’ll be looking forward to playing your project, FE6 is my favorite GBA game and i love that there are many people passionate enough to do their own projects based on it. Good luck

Is the one Sue’s killing in one of the screenshots Zeed from Hasha no Tsurugi?

Yeah.
Zeed gets a fun little cameo in a few chapters.

will he be the only manga character making a cameo? I’m assuming since she’s mentioned Jemmie might also appear at least, though it could just be a name mention.

oh this is not downloadable yet?

Looking forward to play this one. Binding Blade has a great story and all, but having started with the FE games that came after, there are some features I missed (especially the support viewer).

Jemmie may feature - I’m still umming and ahhing about her inclusion. If she does, it’ll be a short cameo in chapter 12 or 16.

I want to keep the storyline as intact as possible for the initial release.

Nothing much else to add. It looks like an interesting take on the classic concept of a FE6 fan remake. I’ll be keeping an eye on this going forward!

Do only some units get branching promotions

Essentially… At the moment most classes have branched promotions; however, some classes only have one promotion option. For example, Wyvern Riders can only promote to a Wyvern Lord.

Thanks for the quick reply. I’ll look forward to more details about the hack in the future!

This sounds really cool, I look forward to the first release.

I really hope we get playable Galle.

Like ketchup in a glass bottle, it’ll come out when it’s ready.

This is hype as fuck. The real ones know.