Special Thanks to:
VincentASM - For helping me figure out the FE9/FE10 filesystem and how text pointers work.
SandwichSage and Nintenlord - For both making LZ77 compressors and decompressors. I used them both even though they’re interchangable.
BSV - For creating Gamecube Rebuilder.

It’s not even much hacking really… it’s copying and pasting, and fixing pointers.
It’s really not much of a hack. More like a utility patch.

Please report any GAME BREAKING bugs. Any text problems will be ignored. It’s not likely I’ll go back to this.

Obviously, this requires the Japanese ISO.

So what’s the point of this?

There IS no point. I’m just a weeb and wanted the Japanese voices on the movie files. j/k

Well, yes. There is already an English FE9, right? So there’s no point right? Well, there’s a counter point to that: 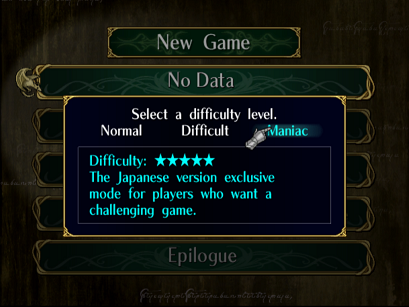 Maniac Mode. Easy Mode took its place for the non-Japanese releases. Pretty much the reason why FE10 froze if someone had an Easy Mode save when transferring bonuses.

So what’s the difference?

Differences in JP Maniac and US Difficult -

JP Maniac mode generally has 1.3x to 1.8x more enemies than US
Difficult mode, and those enemies are usually 2-3 levels higher than in
US Difficult mode. Also, starting chapter 18, Maniac mode enemies are
almost always promoted and of a high level, while a significant amount
of US Difficult enemies remain weak and unpromoted until chapter 26.
In addition, bonus XP per chapter is cut in half and all XP earned per
battle is subtracted by 5.

In terms of unit placement and item drops, the two modes are close to
identical, except US Difficult mode has had enemies removed and their
levels lowered. In all US game modes, Ike starts out with 4 iron
swords, while in the JP game modes, Ike only starts out with one.
Finally, the US version gives a 10% critical hit bonus to snipers,
swordmasters, and berserker classes, while the JP version gives none.
There are a few minor item differences - many US Difficult enemies
found in treasure rooms carry Chest Keys, while in JP Maniac mode very
few enemies do. Finally, JP Maniac stores never sell Physics, while
the US version does… this means you must steal/loot every one.

It replaces the Japanese text for the story and menus with the English Path of Radiance text.

All story text and menus are English. Even the supports. Obviously though, there ARE some issues. Some minor residual Japanese. Not gonna deal with the game code with that. It’s bad enough I had to find out where the “bigkana” font was compressed in the system.cms (Thanks to VincentASM with his help on that). And some slight spacing issues.

I don’t really know if I’ll work on this any more, or if I’m gonna attempt to convert Maniac mode into the US FE9, but who knows.
I may… I may not. I might not even have the skills right now to do so.

If anyone knows how release a patch for the ISO, please tell me how. At the current time, Nintenlord’s UPS format for GBA Fire Emblem hack patching doesn’t work because the Gamecube has a file system that shifts offsets and causes the UPS patcher to basically make a copy of the entire ISO.

Note #1: The system.cmp is larger than the original, so using “import” when you open an image to replace the file doesn’t work. Not even with Wiiscrubber.
Note #2: The movie files are still Japanese voiced, because the thp files are large. I didn’t want to include it in this package.

Video: To be added later. Maybe. I don’t know if I have the guts to take on this level of difficulty.