The inspiration for this topic came to me based on seeing a lot of Death Battle on YouTube and finding out that there is not a single rep on their channel, excluding the one featuring Lucina in DBX. Another thing that brought to my attention is that there is music that involves certain FE characters such as Marth, Dimitri, Takumi, and so on who are featured as commissions for it in the near.

It could be a possibility, but I’m no fortune teller or has foreseen the future.

I’m surprised that no one within the FE Community has thought about it and brought it up before. Feels really strange if you asked me since I looked it up and found no results before I created this topic.

What kind of FE characters that you want to see represented in a Death Battle and why?

I’ve read over this post a few times, but I still have no idea what you’re talking about.

Knew this is not going anywhere.

Or Any of the elibe lords

If I were to have Ike as an Fire Emblem Representative in Death Battle, I would have him fight Guts from Berserk. Both were mercenaries which makes sense.

Otherwise, I would have Dimitri fight against Guts. Both Dimitri and Guts have vengeance and both regain their sanity and not dread on from the past.

They are gonna get absolutely murdered lol

Eh, most fire emblem characters don’t translate well against any manga character solely due to differences in displayed strength. The most graphic display of strength in fire emblem that isn’t from a '“killed on map battle” is Dimitri actually crushing a guys skull with his bare hands. Other than that and his high strength growths no one else really stands out as superhumanly powerful.

What about the fe6 manga?

I honestly don’t know alot about that, however it wouldn’t change much since at best most FE characters are just above average in terms of physical skills and intelligence.

There’s this issue that stems from gameplay/storyline segregation. Like say a hack or game constantly brings up a unit who supposedly is the fastest man out there over several chapters and once he joins you he is indeed fast, with a 75% speed growth to boot, but never levels speed even once hiting level cap and now is the slowest unit in your force but the story continues to treat him like a lightspeed god.

Its why its actually impressive that Dimitri crushed a dudes skull one handed, thats a display of his narrative strength compared to his gameplay strength, something most FE character don’t get to show.

That’s the issue with any video game character against a manga character.

Knowing Death Battle, they do plenty of research on certain characters and their source material from their respected series. Therefore they can take a look at the shows, manga, anime, live-action, and other stuff as well. Speaking of Anime, Fire Emblem only has the promo of the OVA for Fire Emblem 3, remember that and it felt ages ago. Even FETubers did some videos for the potential of a Fire Emblem Anime and its perilous path since it starts to get popular thanks to FE Heroes, it would be possible and risky.

Is this one of those “Goku vs X” debates?

Fe characters are too realistic to compete. Don’t get me wrong, they still have superhuman strength/powers at times, but nothing on the same scale as many anime characters.

I’d like to see Roy participate as a sort of underdog that relies too much on the Binding Blade to fight.

If there is a proper matchup for the FE characters, I would say Takumi from FE Fates vs Hanzo from Overwatch or Edelgard from FE Three Houses vs Kylo Ren from Star Wars.

Hanzo has the Bow and from a Dragon Heritage, same goes with Takumi. Skills would mostly be involved with Fujin Yumi that can help Takumi traverse through terrain and some skills like the Duplicate would help him. Based on FE Conquest, Takumi can transform to his Fallen State and Vengeance skill will tip the scale itself while Hanzo has the experience and his ultimate skill to deal massive damage to Takumi depends on how durable Hanzo and Takumi are by heavy blows.

For Edelgard, she has the Aymr and Raging Storm while Kylo Ren has the force and a lightsaber. Hegeman Edelgard would be in the Death Battle and would stomp Kylo easily, so the fight would be over once Edelgard goes into her Hegeman state.

That’s some of my thoughts and possibilities with it. Just some possible ideas are thrown into the mix since this is a Death Battle-related topic. Anyone else can fill in more detail if I missed out on anything.

One of the issues from puting FE characters into a death battle like fight is how they are portrayed in a fight to begin with. They would either have to fight like Marth/Ike/Roy/Lucina/Chrom/Robin/Corrin/Byleth do in smash or anyone in Warriors does, or fight like how their games dictate. So for brevity its easier to reverse the idea and translate their opponents into the FE logic of fighting.

So Takumi doesn’t fare too well since hanzo also has martial arts training and for the sake of translating him into a FE character effectively has Point Blank and likely higher stats across the board from also being a ninja with access to bows, then you also have to figure out if Hanzo’s Ult would deal Physical or Magic damage and account for that. Then theres possible skills to account for and that gets messy. Takumi also wouldn’t likely be allowed to use skadi due to its existence being caused by an outside source and not takumi’s own power.

The Edelgard VS Kylo is honestly a shut out since there isn’t a preexisting comparison in FE for a solid weapon made of pure light to explain the potential of Aymr surviving a clash against a light saber, and if you want to get technical a Lightsaber in context to FE would likely equate to a silver sword that weighs nothing and ignores defense. Hegemon likely wouldn’t be allowed due to death battles due to the “outside help” clause that prevents the use of abilities the combatant isn’t capable of inherently due to the ritual needed to use it being of the “Those who Slithers” design and likely needed items and preparations only they can supply.

I know it seems like I’m just shooting this whole thing down but death battle discussions usually turn into big “Nuh uh” “yeah huh” fests and I just want to be objective here.

Yeah I’ll have to agree with you with that one. Fe characters are too complicated to portray in death battle and the opponents that they could face tend to have some kind of bs ability that shuts them down instantly.

Honestly while writing that wall of text i actually had fun thinking of how exactly Hanzo and Kylo would translate into an FE style fight. thinking about stats, what skills they’d likely have, possible weapon ranks unique weapon traits, its all actually interesting to me.

Like hanzo’s martial arts skills only actually apply if he’s considered a 3-H character since fist weapons start there, otherwise you just give him point blank to act as it.
He’s older but extremely skilled for his age so likely very high bases but not terrible growths due to still being near his peak abilities. Hell i can even work his two arrows into a useable item like idea. His scatter arrow would be a siege tome with a 3 range Savage Blow at impact point and his Sonar Arrow would be a Bow based Torch Staff.

Oddly these kinds of idea float around in my head constantly but i can’t write a story to save my life much less script an entire hack so unfortunately i can never easily share these ideas. 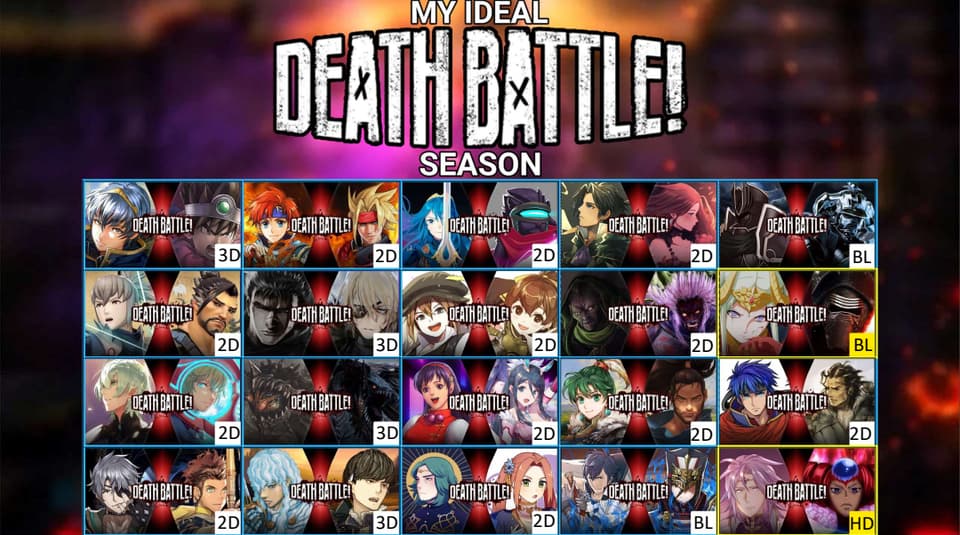 So as I was scrolling around Reddit surfing through when I discover some opponents for certain Fire Emblem characters and it was a selected few that appeared and I don’t know my thoughts about it.

P.S. Ignore the “My Ideal Death Battle! Season”, that is just a template for it.

P.P.S. I have been away for a while, but not gone. Just thought of bringing some things up.