Hello! After a long break of modding, I came back and spent the last three months working on my second mod that I have just finished creating and play testing. This mod revolves heavily around the theme of the Final Fantasy series, but of course still retains the Fire Emblem gameplay we all know. Even if you aren’t familiar with the Final Fantasy series, this mod should be kind to you and not too confusing. Here is a link to everything you need to know about the ROM, that way I don’t have to repeat everything from the document to this post. In the document has the download link for the patch and patcher.

Fire Emblem: Final Fantasy By Shiv This is my second Fire Emblem ROM hack. My first one was just an edited version of FE6, with just changing the characters, altering the maps slightly, and adding a few new weapons. It was a pretty minimal hack...

If anyone has any feedback in terms of balancing or issues you run into please let me know and thanks! 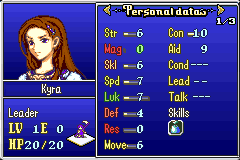 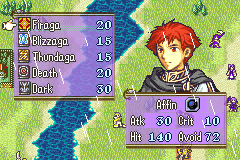 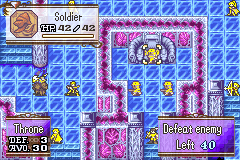 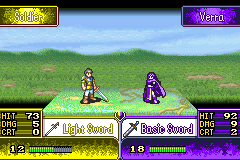 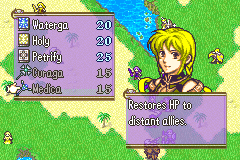 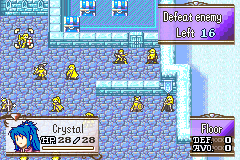 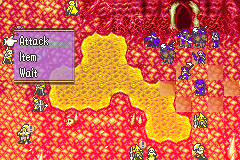 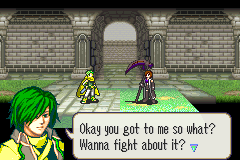 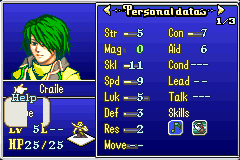 I’ll go ahead and report this. Leaving character descriptions blank tends to lead to buggy stuff like this, so maybe giving enemies the placeholder description like you did with player units would look better.

Player phase battle music is also oddly quiet. Turning up the volume in FEBuilder should fix it. Enemy phase map music is also a bit too loud, especially on the opening note, though that can just be turned down a tiny bit. 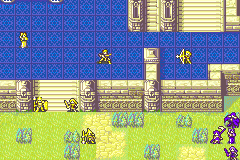 That’s concerning. I’ll definitely look into that Ch2 freeze right away. Thanks for the heads up.

Okay I fixed the crash at the start of chapter 2, I however don’t actually know how to adjust the audio of the music in FE builder because I’d love to be able to do that. The patch is updated on my Google drive now with the Ch2 fix.

Adjusting the volume is fairly simple, but requires a bit of testing in an emulator to hear what the results sound like in-game. It involves going into that song in the Song Track editor in FEBuilder and clicking on either “Music Score” for the whole song or “Track 1”, “Track 2” etc. for the individual tracks. You can turn up the volume by increasing the number on the “Volume Correction” value - for example, if the volume on a track starts at 20, putting in 5 for Volume Correction and clicking Change will make it 25, and putting -5 will turn 20 to 15.

And thanks for the fix, will definitely reapply the patch.

Just as a heads up, when doing credits you’ll want to credit the individual(s) who did/made the thing that you are using rather than doing it like 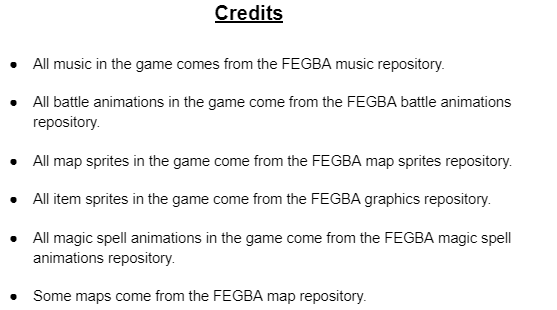 Good point, and thanks!

Game softlocks the moment the green monk spawns in chapter 4

I’ll look into that as soon as I can. Thanks for the heads up

I like the Final Fantasy series and really want to give this one a try. But there is too little information and no screens… Can you add these to the main post?

Everything you need to know is in the Google document, but you do make a good point about putting some screenshots would be good. I’ll look into doing that.

Thanks so far guys for pointing out issues that I initially didn’t come across from my initial test run of the game.

With that said, I have now fixed the softlock in Ch2 and Ch4. I have also balanced the music audio throughout the game and generally lowered the volume of the music in the entire game slightly as well.

The patch for these fixes is in the updated link in the Google document.

Hello! Gave this one a try. Currently on chapter 8.
Things i like about your hack:

After chapter 3 ( or 4), Oberon just disappeared. But it’s still in the unit menu, so the turn doesn’t end on its own.

Thank you very much for the feedback! I will look into why Oberon is disappearing for you, because that’s certainly strange that he is.

I can easily go back and change the enemy descriptions a bit, just thinking of what to put might be the hard part.

I think for the “too many chests” issue I can have some enemies drop chest keys that way other units than just your theif can help open them, that way looting will be much faster.

I know what you mean about objective variety, and that is honestly my weakest area. I do agree with you, but I’m not too sure where to begin with addressing that.

Okay I fixed the issue with Oberon on Ch4, and I have added more chest keys in maps that have a large sum of chests. The character descriptions is a WIP.

I’ve updated the patch file linked in the Google document.

Thank you very much!

Dear author, I like your work very much, but in chapters five and six, my white mage Oberon will disappear, and I beg you to restore it in time