Fire Emblem and the INTERESTING Stones!

Hi. I am new to this modding FE thing. I have never posted here before, so hope you enjoy what I am posting today. Let me know if you have any critiques or just if you like it or not I suppose.
I am in the FEU discord as well. (GOTTA-PLAY)

I have been messing around with FE8 and was inspired by troll emblem to do so.
Here is a link to the series:I Made This Years Ago And It's Bad: Troll Emblem Part 1 - YouTube

I rate this mod 17+ because it has a bunch of raunchy humor. There are other types of humor, but I think that is the most important one to mention. It also references sexual acts. (nothing shown) It also has curse words in it, which is also why it is 17+.
Maybe someone could tell me a lower rating would be fine, but I think 17+ is appropriate.

Note: I did not change the beginning dialogue in the castle, the changes start when Seth
is talking to Franz outside and right before he fights Valter.
(Also sometimes the dialogue looks unchanged, but changes appear a few lines in.)

There is no explicit imagery in this mod. The assets are mostly vanilla FE8.

What I changed is mostly the dialogue, enemy placements on the maps, and
stats of various characters.
(Village house dialogue has not been modified yet, mostly because I was having trouble finding it lol)

In general I buffed the characters. (Seth is an exception, sorry bro, you were too op, he is better than vanilla if you train him though) I did something interesting to Vanessa/Franz though, it is funnier if you find out while playing though. I also buffed every boss. I want the bosses to be able to take more hits. Sometimes fe bosses feel too short to me, so I changed that, although I am sure
people could find ways to beat them faster lol.

Also I would like to say this mod is not finished. I only edited up to chapter 11.
I suppose you could keep going, but it would just be vanilla fe8 with buffed characters. XD
I wanted to see what opinions if any people had before I continued.

Alright, so if you looked at Troll Emblem you might know what I am going for.
I want to make the dialogue more comedic. (there are serious parts, only occasionally though) I tried to make the dialogue silly in most places.
I thought making a mod that made me and other people laugh would be cool.
I also changed some of the character descriptions. Ex. Eirika`s is “We can build her, better, faster, stronger”.

I am not so much going for a “troll” aspect though.
Some things might be considered trollish though.

I am posting some screenshots of dialogue out of context.
I don`t want to spoil the context I want you guys to find out on your own. 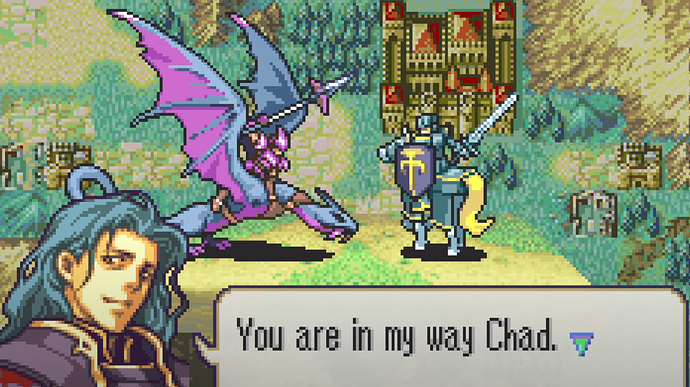 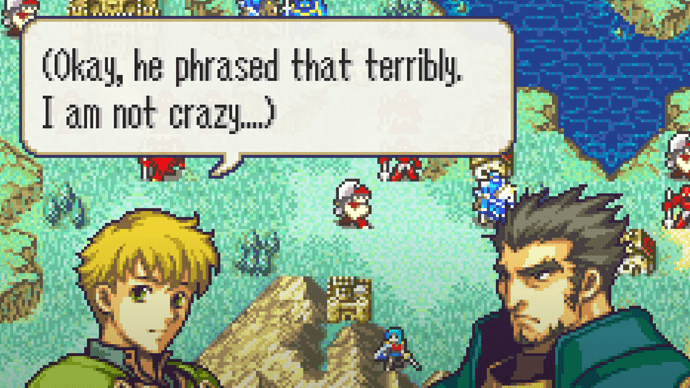 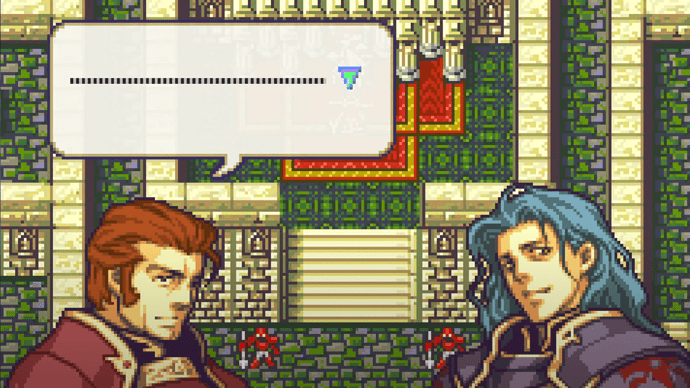 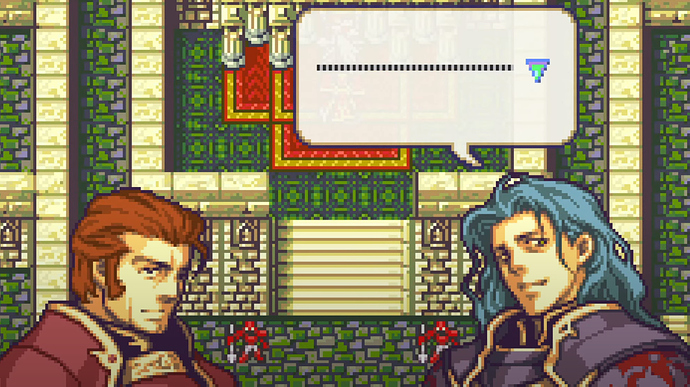 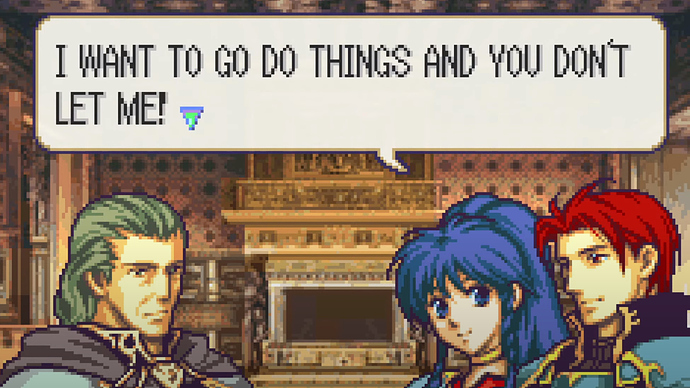 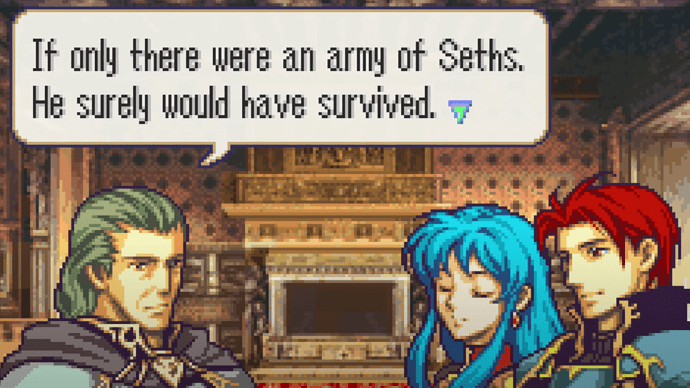 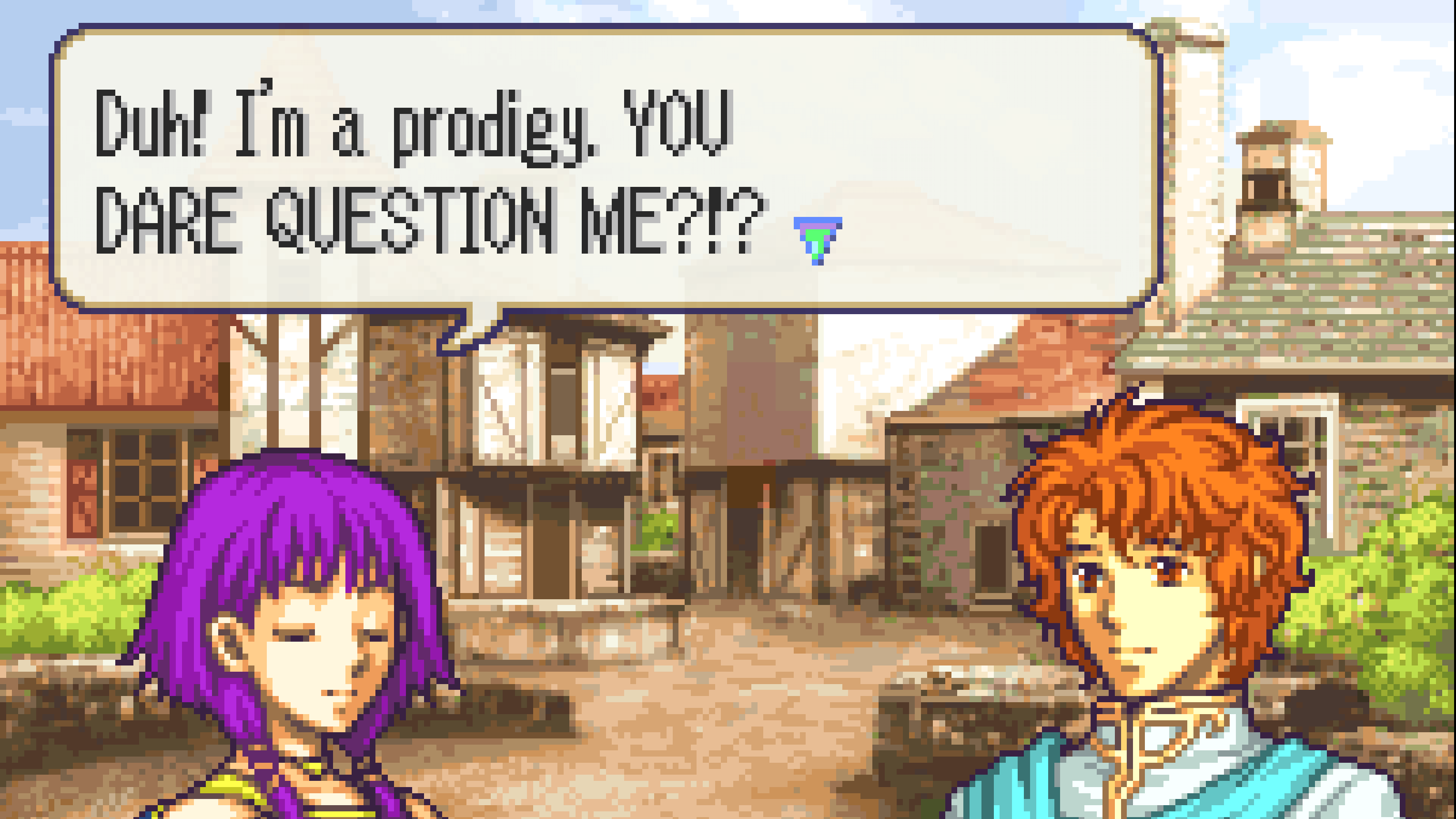 Alright, if I did anything wrong here with the post let me know please. I am not sure there is anything else for me to say except I hope you enjoy it if you choose to play it! If you guys could tell me a
way to change the title screen and chapter names that would be cool too.

Edit: Changed some chapter titles up to 11.

it’s nice to know that someone gets it

Yup. He knows whats up.

If you guys could tell me a way to change the title screen and chapter names that would be cool too.

Based on the patch’s filename (at least, before the .ups was taken down), you made this in FEBuilder, right? There’s a patch in the patch menu for FEB that’s called “Convert Chapter Titles to Text;” install that, and you’ll be able to change the chapter names.

And as for changing the title screen, you’ll again go into the patch menu and search for “OP Title Screen,” and you’ll find where to change the three components of the title screen: the background, the FIRE EMBLEM logo itself, and the game title/info at the bottom of the screen.

Thanks for letting me know how to do that stuff. Edit: Thanks for writing it was removed. I have changed the link to dropbox

No prob. If you’re having any more issues, let me know; I’m no pro with FEB but I’d be willing to help if you need anything.

Thanks. Could you check if the link works for you? Just want to make sure people can download it now.

Should be up and working. Was able to download the patch without a problem.

Awesome. Thanks once again. Also, yeah it was in FE:B

You said I could ask you other things. So, I was wondering if you knew the command to destroy a house on the map or something. I appreciate the help.

Sorry about the delay; do you mean have a house get destroyed like when a brigand visits a village? If so, take a look at the opening event for the vanilla Ch. 2. That demonstrates how to do it. If you don’t have access to that anymore, this is the event code that does that.