I’ve made a rebalance hack for FE6.
Link:
https://drive.google.com/drive/folders/1spQzUq0a6YnwGPhWPzlxZp9FiG9rdNOw?usp=sharing

Edit:
Changes:
Higher Growths to some Characters.
Removed Tate/Thea for another secret character
Two New Characters including previous notice
Buffed all Weapons and Magic
All classes got +1 MOV
Roy promotes in Ch 16
Roy Promotion gets a mount
Merlinus class has 10 MOV
Lalum and Elphin have 8 MOV
Promoted Roy can use Lances at C Rank
Dialogue Change in a certain chapter

The ROM necesary for patching is:
0378 - Fire Emblem - Sealed Sword

Welcome to the forum and congrats on the release.

Do you have any details of the changes that you could highlight in the first post?

I tried patching this with a JP Binding Blade rom and it failed.

I mean, maybe it is for the english version. Some people do that.(me included)

I tried using my English Binding Blade rom as a base too. It also failed. I’m not going to bother downloading every english translation for fe6 made just to check. The readme should say what base to use (although I really strongly suggest just using the original game instead of requiring people to get a specific translation patch).

Removed Tate/Thea for another secret character

All classes got +1 MOV

Lalum and Elphin have 8 MOV

none of these seems like rebalance changes at all

Removed Tate/Thea for another secret character

Nope. Not playing. You can’t completely remove a character, no matter how good or bad they were, and call it a rebalance.

To be fair, Merlinus having 10 move makes sense… The rest, why?

how does this make any sense?
merlinus is effectively a wasted deployment slot in fe6 regardless of how much move he has, giving him a stupid amount of move is entirely superfluous because there’s 0 reason to ever deploy him unless you just never check your inventory before you go into battle

Merlinus (especially with 10 move) as someone who can’t permanently die is useful as bait in emergency situations and can be used to teleport some items after you find one in a chest or village because if you get them with a full inventory what you choose to let go of will go into the convoy, which then someone else can access across the map where Merlinus is in order to get the item and use it sooner than later. The latter was used multiple times in dondon151’s 0% growth LTC strats.

Im’ma give the topic creator props for not reducing swordmaster/berserker crit to 15 at least.

The moment I patched this and began the game, I hear Inescapable Fate.

According to the readme, this translation has a ludicrous amount of work done for a relatively recen

A heads up you forgot to edit the secret character’s class on B route for Western Isles.
@knabepicer

Oh, that’s good to know. I had posted the same question as knabepicer a little earlier, but deleted it upon seeing his response again.

I’ll give this patch a proper chance. I like some of the changes made, such as the movement changes and changes to Roy’s promotion. It’ll have to be tested out to really see if it makes FE6 any more fun or challenging.

Unfortunately, it seems like a lot of people are giving premature “criticisms” of this patch without actually playing it. I find that saying “why” without giving any proper feedback is not helpful, especially for a user who’s completely new to FEU. The only criticism I’ve found that really holds up so far is that the patch doesn’t specify which ROM to use. Other than that, it’s hard to say whether or not any of these changes will really work out without actually playing the game.

Even so, there’s no actual reasoning given as to just why these changes aren’t necessary, just a general assumption made that certain changes won’t work. Even if the patch doesn’t work and the game can’t be played without knowing which patch really works, jumping to conclusions and giving rather vague feedback isn’t helping the OP in the slightest. Feedback is meant to be constructive and help the person who’s making the patch, after all.

dondon literally means nothing, using him to cite a reasoning is meaningless

Even so, there’s no actual reasoning given as to just why these changes aren’t necessary, just a general assumption made that certain changes won’t work. Even if the patch doesn’t work and the game can’t be played without knowing which patch really works, jumping to conclusions and giving rather vague feedback isn’t helping the OP in the slightest. Feedback is meant to be constructive and help the person who’s making the patch, after all.

none of these seems like rebalance changes at all

they seem like arbitrary “let’s just change this”
there’s nothing wrong with this, but if that’s the case, the title rebalance is misleading, because it’s doing nothing to rebalance things

I’m playing the patch right now, once I finish i’ll unpack my thoughts but so far, i’m having a blast because while these changes don’t exactly make the game more “balanced” they are hilarious and I’m really enjoying myself with this

dondon literally means nothing, using him to cite a reasoning is meaningless

Even with just an initial assessment, the examples you all listed all have bearing in some sort of balance. The replacement character for Thea could possibly be better/worse than her or have a less difficult recruitment. Merlinus has already been mentioned before by Almirage as a unit that can take hits and be bait. Sure, you may not use him that way, but others certainly have found a use for him.

Classes having +1 movement lessens the relative movement gap between mounts and foot units, and makes FE6’s maps less tedious to play on. Giving the refresh classes more movement allows the dancers to catch up to cavalry units.

Whether you agree with these or not, there should at least be some acknowledgement that there was (or could have been) some thought put into these decisions. There do seem to be “why” factors as to these changes, they do not seem arbitrary in the slightest to me. I agree that the “rebalance” title may need some work, it could be a case of misunderstanding what a rebalance entails. Either way, I’d say it’s better to actually play the game first rather than making too many preliminary assumptions.

What do you mean by this? A 7 move swordmaster is still 2 move lower than a 9 move paladin and so forth with the blanket buff. 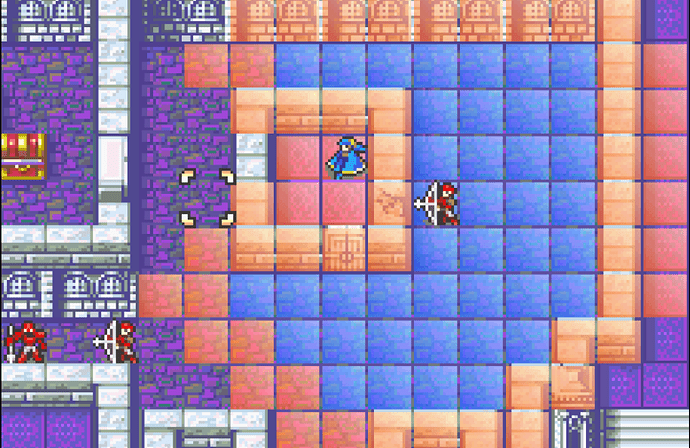