It’s generally been a while since I’ve started spriting… say roughly 3-4 years?
Thought it would be nice to post whatever I’ve worked on here.

Nothing is F2U or F2E unless if I leave it inside the section dedicated to F2U things. Please don’t ask to use anything outside of it.
Stuff that I leave F2U are most likely in blitzes, but for the sake of finding them more easily I’ll put them here too. Credit is also appreciated if you decide to use these.

I’ll update this more when I get the chance but I’ll just leave it as it is for now.

In the name of a fallen hero, (and this was also a request from a friend, along with the hat kids), I finished up a portrait for Soldier from Team Fortress 2. 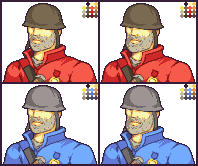 Well, technically 2 portraits and 2 recolors of those portraits.
[Left is for the usual anatomy] [Right is for the TF2 Chin]

Rest in Peace, Rick May.