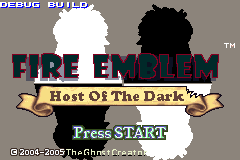 I am very excited to hear feedback and constructive criticism, please enjoy the hack! It’d be much appreciated if you’d send screenshots of your final team so I can gauge interest in certain units!

Gave the game a quick run. Prologue-6x were pretty whatever, very weak enemies and not really much in the way of interesting objectives to pursue. Chapter 7 was actually pretty cool, I liked having to get the keys from each promoted enemy and then bringing them to the doors to open the path to the throne.

But then after chapter 7, everything went downhill. You’re stuck with one frail unit for two maps with extremely limited healing, and then after that is a really boring survive map. I wish I could’ve just continued with the party I had back in chapter 7, and have more maps of that quality.

I see thank you for your feedback

again, thank you for the feedback, it is truly appreciated

You should just have the wyrmslayer be guaranteed in part 2. I never even got it because the boss who was supposed to drop it used it to attack me on enemy phase and he dropped a different weapon. Also maps where you only have one unit are not very fun (in the fog map, I could not recruit the nomad and thief, so I only had the frail lord). Especially in chapter 8, it was extremely tedious to walk around the map and grab the chests after talking to the boss and pacifying the enemies.

yeah the wyrmslayer thing while not necessary would’ve made things easier, I may want to have the nomad and thief recruitable that chapter to make things easier. Chapter 8 could use some ironing out, while I do think a solo chapter is necessary for the story (maybe have Tobias tag along then leave) story shouldn’t sacrifice gameplay so I will fix that up, thank you for the feedback, it was really helpful.

0.6 has been unveiled! Two new chapters, bug fixes, complete chapter 8 overhaul!
I have also submitted Host of the Dark to FEE3 so be on the lookout.

Host of the dark has been updated! 0.7 release raises the chapter number up by two and brings us ever closer to the climax of this story! Still feels like I’m just starting the hack if I’m being honest, progress has slowed down recently but I’m slowly chipping away at it no matter how slowly!

Oh boy, the hack’s almost done! This has been an amazing hack to work on and I’m excited to get it to 100% with supports!

It’s important to note that this hack IS completable all the way to the credits, the only thing missing are the support conversations! So if you’re going to make a fair critique of the story then I advise to wait for the 1.0 release, I intend to fill in a few plotholes in various support convos, excited to write Fidem and Sagiita supports, those two were fun to write!

How many chapters is this going to have? I tried looking for a number but couldn’t find one. Congrats on an almost release!! Supports are gonna take awhile and of course take your time with writing them and fleshing them out, no rush. Always good to see a rom hack come to fruition. Good luck with the rest!

oh yeah, this hack has 20 full chapters with 2 there for story reasons, forgot to mention it in the post since my previous title had the chapter number.

I realise this question might be a little selfish, but is there any recruitment or gaiden chapters guide ? (Granted that there is any Gaiden chapters.)

at the current point there is no recruitment or gaiden guide but there are no gaiden chapters with requirements and most if not all recruitments are told pretty blatantly to you, if you’re unsure of it’s requirement try the lord first then Fidem and Sagiita, if you still can’t then reread the dialogue carefully to see if you missed anything.

I may make a recruitment guide to go along with the game’s 1.0 release so if you really can’t play the game without knowing how to grab every character then wait until then but as I said the recruitments are pretty straightforward.

Ok, then, the review.

You use F2U portraits. At that’s OK, if you don’t feel skilled enough to make your own. However!
Your hack includes a timeskip. It makes it very hard to determine which character is who.
Compare younger and older Sagiita:

Apart from being female, they look nothing alike.
Suggestion: Recolor the mugs so that the younger and older versions of the characters look a little more alike.
Either this:

Now they can at least pass as the same character.

The palletes are also very ugly.
Compare this:

This is a very basic alteration but it goes a long way into making the hack look less visually jarring.

Another complaint: Add character description. It’s nice you write who made which chracter, but some of flavour text would be nice. It adds characterisation to the heroes.

Another random thing I found wierd: why don’t you use the Moloch battle animation for Tobias? His portrait was literally made for it: 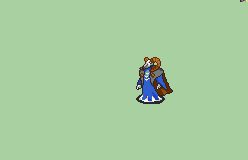 Characters are super broken too, but I think that was on purpose so OK.

The maps are… poorly made.
Look at the second map (“Flee insanity”) 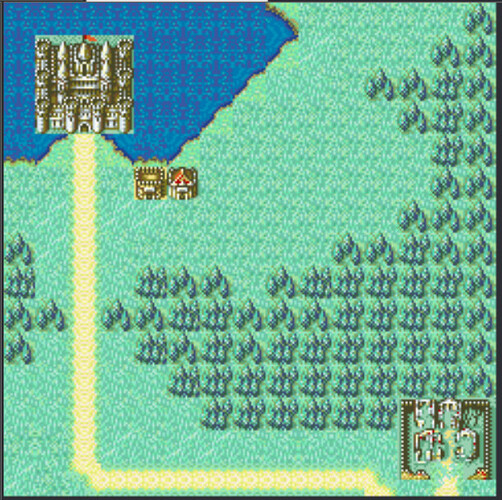 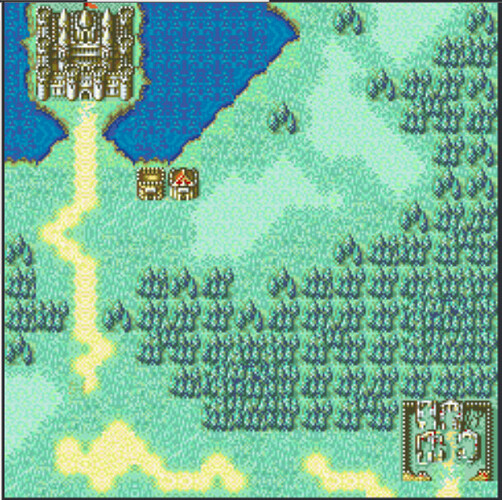 The later maps are also waaaay too big. 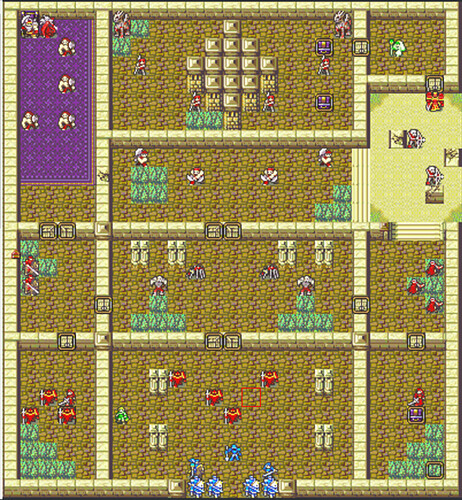 image755×816 366 KB
Most time I’ve spent on this map was just moving my units and that’s not fun.
You can narrow it to this no problem: 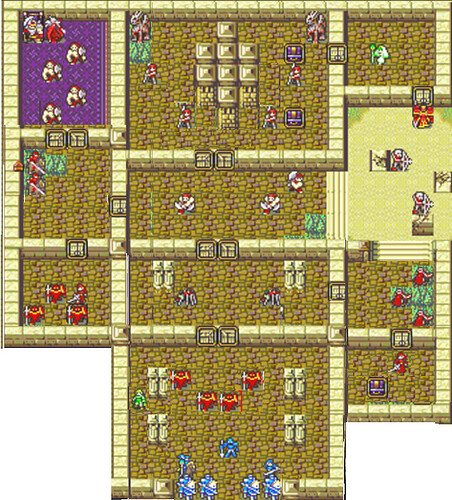 I also found a hilarious bug. On map 4 (“Redemption”), there’s a house. It gives a free secret book and you can visit is as many times as you want, efficiently giving you infinte secret books. Just add a completion flag.
On map 17 (“The First Floor”) you need to seize only one throne to win, which was not the point (I think).

Part 3: Story
The idea is cool but the execution… leaves a lot to be desired. It’s all over the place. Of course, too much exposition is bad, but you have little to no exposition. Add an intro where you explain the conflict between men and deamons as this is never properly explained. Go through the dialogues once more. Fix all the lower caps, add comas and so on. Also split the senences a little. The character sometimes have like three or four lines of a single sentence. Not a lot to talk about here, the story is pretty basic and I’m not a biggest fan of it but there’s nothing I can do about it.

Conclusion:
The hack is bad. I congratualte you on making it nonetheless, that’s an achievement in on its own. Now you learned how it is to make a hack and let’s hope your next work will be better.

but isnt this hack not done yet? how can u give a review when its not done?

The only thing that’s not finished is the supports. Also the creator recommended me to play it and I promised to leave a review, so… yeah.

think imma try it for myself too now then, btw what about the difficulty, u didnt say anything about that.

Thank you for this review, even if it’s all criticism it’s the first review I’ve been given so it’s good to see that I can improve from here, thankfully small things like portrait coloring and animations can be fixed along with the support update, maps however I’m still determining whether or not I should change those up, I probably will.

Anyway thanks so much for the review it was very helpful!

Ok, i gave this a fair shot and quit at defending those two villages. Not gave up, quit, and i don’t do that lightly.

This was mostly due to being both bored and confused.

It feels like there are somehow both too many and too few enemies on each map due to how rough everyones starting stats are. Chapter 4 is horrible because you can end up starting enemy phase after getting a house event spawning 30 dudes in an ambush spawn with a general who can/will one shot everyone moving 6 spaces when all but two of your units can move 5. and almost every enemy has strangely high speed. Like a level 4 fighter with 10 speed strange. Hell on chapter 5 once eagle spawned the boss suddenly went from 9 luck to 29 luck making hitting him annoying.

Not a single character has a proper description, they’re all just named “portrait by blank” which is awful for giving me any reason to care about these characters. In game i don’t even think the continent your on is named. This story isn’t even coherent since since so many characters change so radically that its impossible to identify them.

This hack is in really rough shape.

Thank you for the feedback, I’d like to clear up some things that may help a bit with your issues

a house event spawning 30 dudes in an ambush spawn

okay, I understand your complaint here but I would like to point out that the dialogue clearly stated that there was something off about things, the win condition also clearly said to defeat a character which was no where to be seen, along with that the village is the only one not destroyed within that box of villages, one can assume that there would be something up with that house, it’s also no guaranteed that you visit the village at the end of your turn, the enemies also pop out after a certain number of turns if you take too long to reach the village.

a general who can/will one shot everyone moving 6 spaces when all but two of your units can move 5.

this puts you on a time limit, you also forget that this general has to cross two corners in order to reach the army in the villages, where the main action is, this can also be circumvented entirely with Tobias’s summons/

the boss suddenly went from 9 luck to 29 luck

that’s a glitch I need to fix

Not a single character has a proper description, they’re all just named “portrait by blank” which is awful for giving me any reason to care about these characters.

okay, this was a decision made when I first started hacking, I did this more to make sure I was properly crediting everyone, I most likely will do create proper descriptions once 1.0 is done

In game i don’t even think the continent your on is named.

so many characters change so radically that its impossible to identify them.

can you explain this? If your talking about that one point where Cory drops his speaking quirk, that was intentional, if you can provide examples I’d be grateful.

regardless thank you very much for the critique, I’ll take your criticism into consideration for potential reworks and future projects I will work on, I appreciate the honesty, it doesn’t sound like you pulled any punches talking about it, which I am thankful for.