Resident Emblem 8 is a 1 chapter hack of FE8 (it will instantly clear the prologue and take you to chapter 1) in which you can pick 7 units out of 50 (playables + some bosses) and try to make them survive the zombie apocalypse.

As is with the title, there will be some references to Resident Evil as well as other zombie(-like) apocalypse shows, such as The Walking Dead, High School of the Dead, and Kabaneri of the Iron Fortress, mostly in the form of unplayable characters. Minimal dialogue and spritework was done, the focus is the gameplay.

Credits:
-Hack made with FEBuilderGBA by 7743, and its available patches by their respective creators

Lastly, I’m pretty sure I thoroughly tested everything, but do report bugs if you find any, and feel free to leave your comments on the hack regardless. Hope you enjoy playing/watching it. 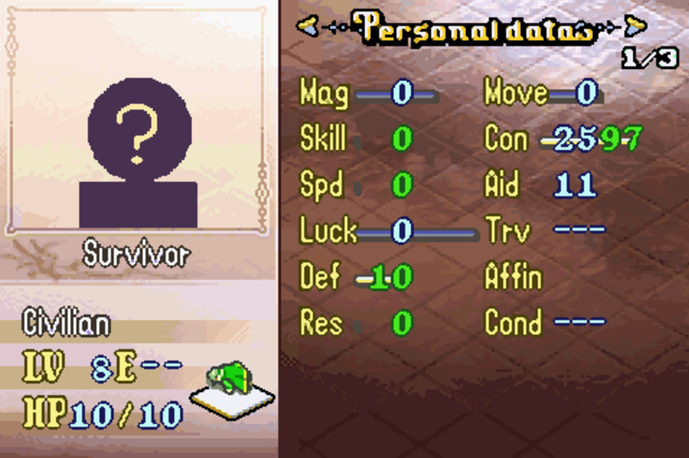 Im trying your stuff. So far I did not started the challenge yet, checking the npc and this guy has no face and his cons is weird.

I will pick my team with random roll now.

So I made 6 turn and the NPC seems to be too srtong. I dont really have to do anything I can let my units sit back and there is 18 enemy left.

Also I talked to Kenny, he gaves me an energy ring and then a force promotion happen and the music used for promotion keep playing after that, until next turn.
(EDIT: OOps I did not read your added information because I wanted to keep the surprise, but you already know that issue).

I noticed there is no fliers in the player team, thats an interesting choice of yours.

Here you can see I barely moved, I stayed at the bottom, most of the monsters died by hand of NPC. 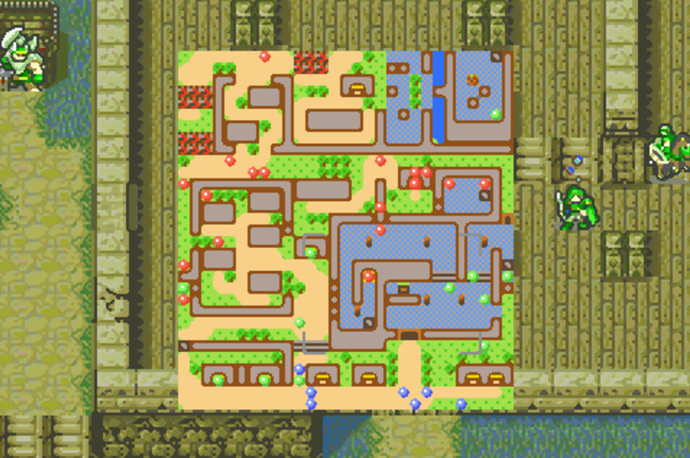 Well turn 15 and im about to be killed by all these Gwyllgi with those nosferatu fang (thats OP lol).

I was unprepared im giving it a second try later.

Saya with Nosferatu can hold a lot of them. They did not cared about me until I go for them. (and die) 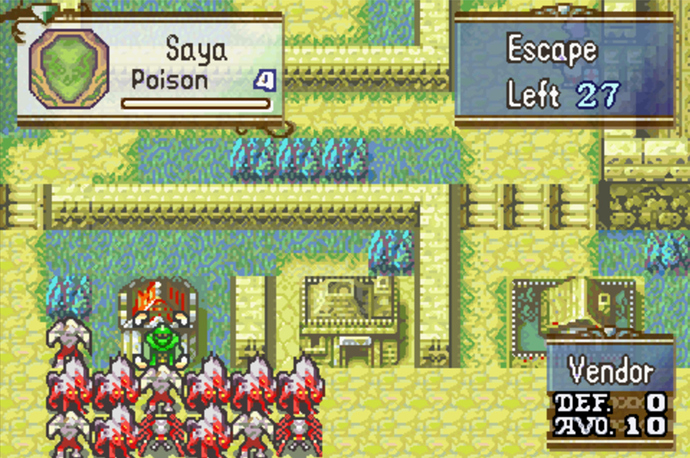 (Fun fact: I died before all the NPC).

EDIT: I Stayed until all NPC die eventually to check if your end event works but I cant tell, there is an infinite loop at some point, the spiders stop caring about Chris and sit here.
I guess we can tell Chris did survive all of this in the end. XP

@watler253
The npc is face-down, as you can see by their map sprite, so you couldn’t see his face. Clearly, that is why he doesn’t have a portrait…but jokes aside, I forgot that the face-down prince class didn’t have a generic portrait set to it. I’ll probably leave it like that though, unless something gamebreaking requires a fix. His weird 2597 CON may be because for some reason the class’s base CON is higher than the max CON, if I had to guess.

The NPCs are meant to be stronger at the start, after all they won’t level up and they don’t get more weapons, so you’re encouraged to do more fighting yourself. Not much happens until you make some progress, so it does seem easy at first.

Saya is pretty frail but the Nosferatu helps her survivability quite a bit. Still, she can easily die if she kills a weakened enemy or gets doubled, some enemies can even one-shot her.

The village entrance tiles are unwalkable, so if the only allied units left don’t move off of them, the enemies won’t know to move towards them, causing a soft lock. But I think what happened with Chris may be different, maybe the Bael closest to him triggered the healing AI, effectively blocking the path for all other Baels. But they alone probably wouldn’t be able to kill him anyway, so it would still get stuck. I don’t really mind since realistically, for this to happen the player already lost so the soft lock may as well be considered an alternate game over.

I didn’t put any playable flyers since you could just ferry units over to the end and skip most of the map if you had them.

Thanks for playing and for the feedback. Hope you enjoyed playing it.

Yeah the experience is enjoyable, actually its a good challenge I will give it a serious try tonight.

I didn’t put any playable flyers since you could just ferry units over to the end and skip most of the map if you had them.

You could give fliers the same movement cost as cavalry, so we can use them. Or just make them unable to move trough everything.

That would require more steps and would probably look weird for people playing blind, they’d probably think it was a bug. Better to simply change their class altogether, give the game some alternate promotions. Paladins aside, the only ranger would be Hayden and the only great knight would be Duessel, so that gives people more options for those classes too.

Edit: Also would have to think about what to do about flier effectiveness too.

-Fixed a secret item’s description and data
-Fixed another secret item crashing the game
-Fixed male sniper not having crit bonus
-Fixed one of the reinforcement zones incorrectly also triggering the final zone’s reinforcements
-Fixed Tana and Vanessa’s palettes
-Changed 1 tile in the map
-Added a droppable (but hard to get) Restore
-Applied patch that prevents NPCs from healing playable units with full HP
-Gave the playable entombed a gimmick, killing most monsters with him spawns an NPC entombed to help you each time

Is there any guns animations? Asked for a friend.

I’ve seen some, like a myrmidon and sage with guns, but they don’t seem to be in the repository that I used and linked on the first post. There are Samus and FGO Nobunaga animations there though, if that works for your friend.

@Shuusuke
For the music issue with force promotion =>

Thanks, ended up forgetting to fix it in the update. Since it’s a really minor thing I’ll just fix it if something else game breaking is found though.

Finally beat it!
Very enjoyable experience also I liked the fact the Monster unit can spawn things for us if it kills something.

I recommend it for anyone who seeks challenge, this hack is not easy!

At first I planned the playable entombed to be more just a meat shield with lower bases but higher growths, essentially a more challenging unit to use. But then I had the idea to make him also spawn more (undead) meat shields when he got a kill to make it more rewarding to use him, and just to add a unique, fun and relevant twist to him really.

Glad you liked it, thanks for playing. I did warn that it was rather difficult.

I haven’t played this yet, but this is a cool concept. I always wanted to make something similar based on games like Left 4 Dead.

about that… you can still obtain the C support for Neimi and Colm.
Not sure if you can do anything about that but thought it’s worth mentioning. 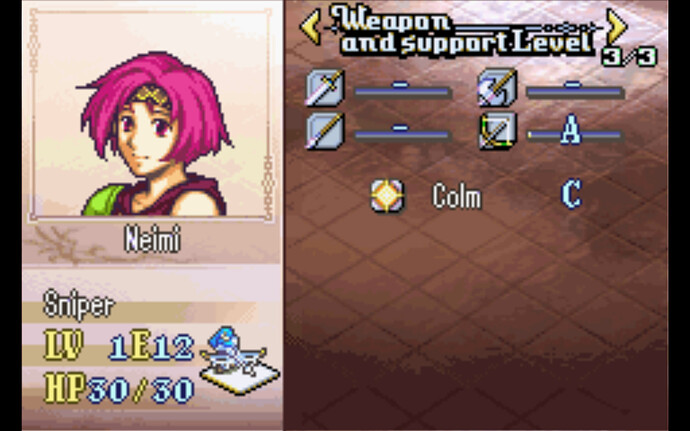 Updated to v030. You can keep your current save, but some of the changes will only be in effect on new games. This hack got some extra attention recently and I’m grateful to those involved.

Changelog:
-Fixes to missing portraits, palettes and descriptions.
-Fixed Neimi/Colm support being able to be triggered.
-Fixed and changed some units’ AI.
-Made it so most NPCs can gain exp.
-Made it so NPCs get droppable items.
-Made it so the player can trade with NPCs.
-Added events related to the passed out guy, now he’s more than just a funny thing.
-Optimized/fixed one or two events.
-Removed the vanilla events, such as the intro.
-Added the QoL patches of the HP bars with warnings and the modular mini stat screen.

The rest of the gameplay is unchanged, since I liked the state it already was in.
These changes make things more fun which is the most important part.

This might have just been my personal experience but I have to ask: is Lyon objectively the best unit in the game? (Cuz holy crap did he pull through with the clutch finish).

Yeah he’s a very solid unit, if I had to name one that’s more reliably the MVP it would probably be Lyon.

Comparing him (top) to the other two Druids, Knoll (middle) and Novala (bottom), his level 20 averages are behind but not by a lot compared to the others’ top stats, while on the rest of them he’s ahead by more than that, and most notably his defense is much higher than the other two frail druids. 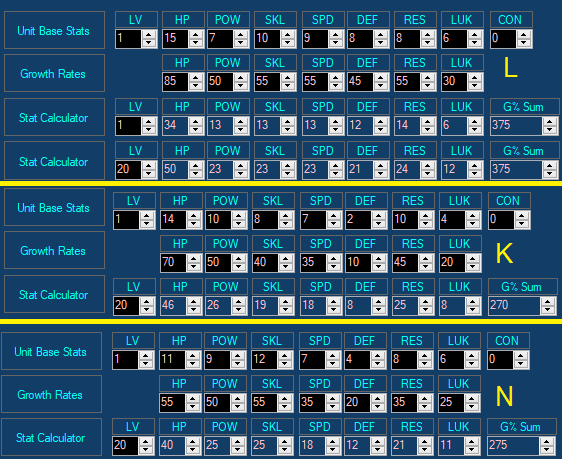 I didn’t touch unit growths (aside from the bosses which didn’t have any) and Lyon has some really good ones, coupled with good well-rounded bases, powerful 1-2 range in the form of dark magic, and staff utility, he’s looking like a promising contender for the title.

EDIT: Forgot another important thing, which is the ability to use Nosferatu.

-Monster weapons now display their stats in the descriptions
-Even with animations off, you can still see the battle stats
-You can see how much HP will be healed with a staff

EDIT: Quicker update to v033, two more QoL patches:
-You can check the danger zone to see all tiles that can be attacked by enemies
-AI now makes decisions more quickly