Thank you, but I only made Surya (Hawkeye reskin). The female assassin is by SHUYTERz, and it’s on the repo.

A public graphics repository for Fire Emblem portraits, battle animations, map sprites, and other assorted graphics people might like to use. - FE-Repo/Battle Animations/Infantry - (Swd) Thieves, R...

Sharing a couple of fun screenshots from my almost-complete playthrough.
My Storch has some pretty good stats, but his hit rates aren’t great. 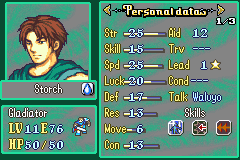 Fortunately, I’ve been hoarding all of these stat boosters! 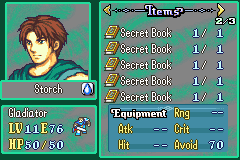 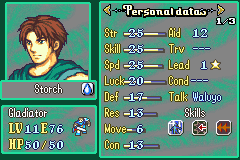 Me, immediately before I realized that I could only use one Kaya per unit. 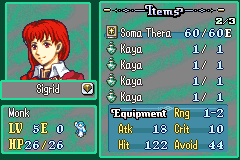 Speaking of hoarding stat boosters, you can obtain up to five body rings (at least, that’s how many I found) before chapter 4-4. If Dreyfus eats all of them, he ends up with 21 con. This makes him almost impossible to rescue, but it also lets you do this: 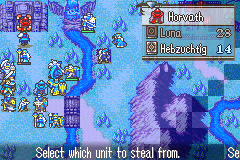 The setup is easy to replicate, Horvath will always use Luna against base-level Anwen due to her high resistance stat and only has a 5% crit chance on her. Hebzuchtig isn’t prf-locked, either, so your other units can have fun with this. You definitely lose out somewhat on steals in parts 1 and 2 because you can’t boost Esfir’s constitution, but I think the novelty value makes this worth it. 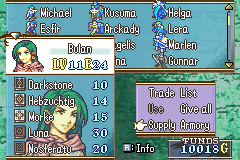 Excited to see how these last few chapters play out!

Yo! Nice job with your Dreyfuss. That’s a heavy tome you just jacked lol. Steal+ is my favorite thing about the game. I just started a new run a few days ago and got Esfir to Steal+ by the start of 1-E.

Also… are you saying there is a body ring in part 1? I never found one before 2-4

No you’re right, I don’t think there are any in part 1. I’ve been playing this over several months so I just kind of conflated parts 1-2 in my head.

Oh my god… This will be a goal for any FE collector out there now. Amazing work! While Waluyo is missing this trinity certainly is more fitting not only since it doesn’t spoiler a third lord (which was very surprising for me) but it also reminds you to the connection Esfir has to Titus and how she more or less ties Storch and him together, representing the stories behind the main conflict. While on the other hand you could also see Storch in between them as a double edged sword (he is literally weilding) with one side being Titus and the Emporer, the clear goal which Titus has infront of him and leading Storches current life and the other being Esfir and therefore all of his friends, the life he kinda wants to pursue but cloaked in fog.

Probably too much interpreting work here from my end but I think the whole piece just fits perfectly to the theme of the game. I do not know if a game with the F word would qualify as E for everyone but I am not so familiar with US age ratings xD

Hahaha you give me too much credit as I was only at the end of part 2 when I put this together and was as surprised as you at the start of part 3.

I’m sure there’s someone who could put the rom on a gba cartridge and print a box. I’d be happy to provide art for a box and cartridge sticker if anyone attempts.

If you have a printable template for it I would give it a try. At least the box, dunno if I could get my hands on the stuff to make a working cardridge. 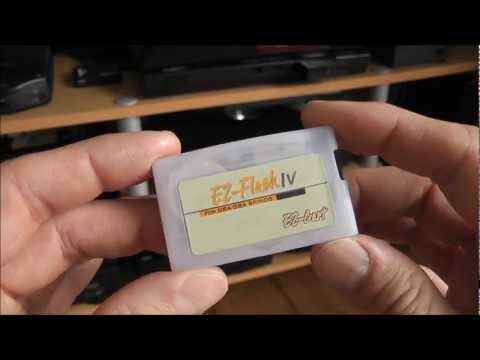 As long as it can play the hacked rom, then you could just replace the sticker.

As far as the box I’m sure there’s a template online, you could get it printed at any place that prints semi gloss on cardstock.

I just didn’t make a back of the box! I’d be willing but wouldn’t dare come up with the game description on the back, maybe let the creator do that!

I’d say it’s possible one could find a way to do it. 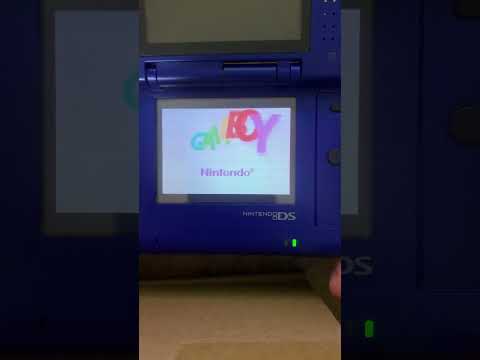 Always surreal to see this

there are single-flash (well technically you can reflash if you have a flasher) repro carts, probably on vennbenn’s store

I just can’t get enough Vision Quest man. I recently sat down and ran all of Chapter 3 in a weekend-it’s my favorite part of the game! This time I finally got that Brave Sword. I stopped being stingy with my good stuff like the sleep staff, nosferatu tome, and the brave bow. My Onderdonk got a few lucky speed levels and was actually doubling :). I think 3-E is my favorite map in all of the FE8 hack universe. By the time I got all my units promoted and a full army, I felt like an unstoppable wave crashing down on Lori. Very satisfying stuff.

Has anyone done a reverse-recruitment or randomized recruitment patch for VQ? While the game is already very replayable, I would love to do a run where you never know who is about to join. I realize this would mess things up story wise, but I skip the cutscenes anyway, having seen everything a couple times already.

Glad you’re enjoying it. Yes, Kyrads did the reverse recruitment patch based on the v2 patch.

Hi everyone! I am releasing a Reverse Recruitment patch for Pandan & Friends’ FE8 hack, Vision Quest. This has been my favourite hack for a while and I do enjoy Reverse Recruitment in FE so I thought this would be a fun project to do on the side. I hope everybody enjoys playing and please, leave screenshots of your playthroughs and units! Download Here!!! Important! This has not been fully playtested, as such there may likely be some mistakes made by myself or possible bugs created while doi…