Thanks for showing your interest! Always nice to hear that people are enjoying my work.

Feel free to check out the Discord server, there’s more updates (including a draft of the enemy phase music!).

The FEE3 Let’s Play is up, so I’ve updated the link in the first post. Also, denied deployment does work, it just wasn’t showcased in the video.

In other words, you can access the inventory of unavailable party members in chapters they can’t be deployed; for trading n stuff.

We’re still alive! We’ve gone through a rewrite but the proyect is still going. Here’s a sneak peak of the start of Ch 1. I’d like to apologize since there’s no audio (my recording software deceived me).

THWD started off as a solo proyect but over time I’ve managed to recruit 6 other people to the team (we are now known as ‘The Banter Brigade’); including 2 sprite artists with like a decade of experience, an ASM wizard, and a musician that makes their own dope compositions and remixes (expect a fire remix of the Verdane Army theme and a few epic original songs, I’m currently working on adjusting the MIDIs for the GBA).

Our team isn’t set in stone, we’re willing to accept people with open arms (Our Dev chat consists mostly of shenanigans, we’re all here to have fun). If you’re interested and think you’re up for it drop me a DM on Discord: A_Reliable_Chair#1337. If you can bring something new and exciting to the table whilst being awesome and cool I’m sure you’ll fit right in.

Next Public Release When:

Well, I don’t like setting deadlines for hobbies, as it worked out poorly in the past. But I’m confident in saying that we’ll have a 6 chapter revised demo out within a few weeks.

I’ll probably play this when it comes out. Seems really good Chair.

Oh yeah, are you the one that commissioned my friend for music?

Thanks, glad to hear it!

@MrKarkino I’ve shilled your work enough, somebody might steal you away!

@Arch Gib money and we can make that happen.

@Agro That was the plan at first but we’ve since recruited a musician to the team. They showed up and were like “here’s a bunch of MIDIs I made, go nuts.”

Hey everyone, apologies for such a long wait since the FEE3 demo (which was released Nov 1st). It was a busy time of year, plus we went through a rewrite. Expect future updoots to come sooner!

Ch1~6 of rewritten THWD is now playable! If you’d like to try it out (or be super awesome and cool by being a playtester) the dropbox link has been updooted!

Hey all, updated the patch in the OP, also there’s screenshots in the OP now. Ch 1~6 are good to go!:

I can’t believe you adjusted the difficulty to be more reasonable.
I’m expecting a Lunatic mode in the future as compensation.

Hey everybody, updated the public patch, you can play up to and including chapter 9 now!

Here’s a few other notable changes:

There may be an issue with Bianca’s animations that freezes the game; for the time being, please disable her battle anims.

This issue has been resolved, all is fine.

Hey everyone, I had a chance to do a start to finish test, here’s a list of issues that have been address:

The patch in the drop box is up to date with the fixes. Sorry for any inconveniences.

Sorry for the inconvenience, but the patch has been updated. Issues regarding the following have all been taken care of:

Hey everyone, the patch has been updated:

Apparently people like this jerk, so he’s here too. 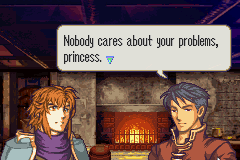 a better Lord than Eirika could ever aspire to be

Hello all, time for another THWD update, we’re up to 12 playable chapters the dropbox link in the OP has been updated!

Please be sure the check the unit formation for these new chapters if you’re using an old save, you should be able to place them where they’re supposed to be during battle prep.

Aside from that, we’ve made a few tweaks: