FE8 But With Child Units

Pretty self-explanatory! Basically vanilla Sacred Stones but with some added child units. As of right now it’s not particularly balanced in any way but this is more just a “see if I can do it” type project. I’ll post updates here and pictures of the kiddos and their stats/classes/etc. for those curious. This first post is largely incomplete and will be filled in with more details on each kid as I finish them.

Right now there are 15 planned child units, some with different variants depending on their second parent. Units with children assigned to them are:

I searched through paired endings to figure out genders of kids if they were named as well as number in the case of Neimi and Colm. Class is mostly my personal choice unless the epilogue provides more detail.

Bases and growths were determined using the averages of both parents or in the case of some units one parent was given more weight than the other to make siblings varied. Right now I’m just focusing on getting them implemented first and then balanced in terms of stats second. Hoping to have some pictures soon in the near future!

F for the children who never got a name.

Haha they’ll get names eventually! Some already do but I’m just waiting until I have more actually put into the rom before I update the list

interesting btw, is strange no one maked this earlier. Will you do different portraits depending parents? also Ross’ son have 1 potencial mother who’s amelia and amelia have a daughter who have 3 potencial fathers, children no necessarily need an IG parent? (like FE4 sustitutes)

lmao called me out, niles forgive me pls

I am totally down for some gay pairings and child unit shenanigans as a result, but right now I’m trying to leave vanilla Sacred Stones as intact as possible (which is why children currently can’t support with anyone, including their parents), and that means only creating these units for pairings with supports/endings that specifically mention marriage/children. If I’m able to pull this off with the 15 planned units, for sure I’ll add in some more.

Will you do different portraits depending parents?

Yes! In fact…
Here’s Ria’s sprites with each of her possible fathers. Note the slight differences in base stats as well. 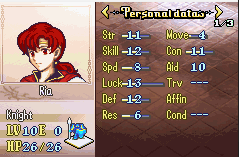 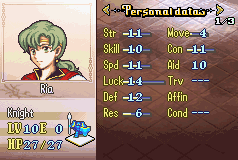 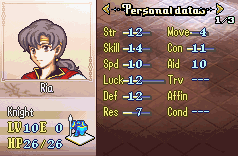 Credit to MrGreen3339 for the character sprite!

also Ross’ son have 1 potencial mother who’s amelia and amelia have a daughter who have 3 potencial fathers, children no necessarily need an IG parent? (like FE4 sustitutes)

Another feature that would be cool to add later! Basically the appearance of a child unit relies on the patched in GetSupportLevel event which determines which version of the child appears, but it’d be no real trouble to just add in a child with adjusted stats for no in-game parent. I also have an idea for a hidden child but that’s for later.

Also I’ll update the first post with these pictures and some more names/classes!

I feel like it may be better for mug space if you made the palette getter for mugs conditional somehow, so you only have to use one mug

Though, that sounds like a lot of work lol
Do what you want :OOO

GetSupportLevel, like Zelgius says, interesting maneuver, is it possible to make characters vary classes depending of the parent? like Seth!Ria is a cavalier, Innes!Ria is a Knight and Saleh!Ria a Cleric for example

Yup! That wouldn’t be an issue at all. Each child variation is a separate unit in the unit list so they can all have their own classes, palettes, etc.

Yooooo, you put me in the hack! Lol

seeing Ephraim’s son looks like Tana version is overall worse than L’arachel, i think that’s a reason for parent dependant Class being a thing, but i’m getting very intriged with that project, if you want any help i’ll try to give it

i can help in Midi editing, portraits, scripting and writing.

Not too sure about the class of Ephraim’s son.

Also, while it’s not stated that they do marry, Tana and Marisa also have paired endings with Cormag and Joshua, isn’t that enough to have them as potential fathers?

Yeah I’m probably going to rework Tana!Hiram’s stats so they’re more weighted in favor of Ephraim’s stats, which will also prevent Tana’s kid from having the same bases and growths as Hiram. One thing I’m certainly learning and developing an appreciation for is stat design of units. Once I manage to get all the kids implemented and I know that the game still works I’ll be able to balance it more. I appreciate the offer for help and if I find myself running into issues I"ll be sure to reach out. Right now though it’s mostly just plugging in numbers and running calculations

Not too sure about the class of Ephraim’s son.

Flavor-wise he’s not a fan of fighting and I liked the contrast between Ephraim who is obviously combat-oriented and him having a son who is a healer.

I did consider Cormag and Joshua’s endings with Tana and Marisa respectively and I initially decided against it because no, they aren’t explicitly stated to be married (not that you need to be married to have kids obvs). My personal interpretations of the Tana/Cormag and Joshua/Marisa endings were not romantic and therefore I did not include them as potential parents to the kids. From a design perspective, it would give Tana’s kid another father besides Ephraim and Joshua’s kid another mother besides Natasha, so I won’t rule it out but for now I’m going to stick with my determined list.

Just an update for today, I’ve gotten all the growth rates for each of the kids determined and have gotten 6/15 of them actually put into the game (this includes each version for the ones that can have multiple parents). Once I get 15/15 in I’m going to work on the events that actually allow you to get them in a regular playthrough and make sure that doesn’t break the game. I’ll work on updating the first post with pictures of the completed kiddos~

Hey, I just wanted to say that I think this is a pretty cool project, also, and forgive me if it’s an inconvenience but I found your reasoning behind Hiram’s class kinda interesting and I was wondering about the reasons you decided on some of the other classes, you know, besides the more obvious ones.

Not an inconvenience at all! I love explaining stuff like this~

So when I first determined the parents who would have an assigned child, I scoured the endings to see if anything about the kids were mentioned that would help me come up with a class for them. Neimi and Colm’s ending, for example, mentions that Neimi teaches both of her kids archery. So they’re both Archers, since unfortunately FE8 only has one tier 1 bow wielding class.

After looking at the endings, I went parent by parent and thought about classes that would be fitting (or amusing) for their children to pick up. Ephraim, for example, having a son who takes up healing instead of fighting altogether. Kind of a trope-y choice, but I’m fond of it. Similarly if I felt it made sense for a child to have a class similar to or exactly like their parent (such as Wilmot, Gerrik’s son or Errol, Tana’s son), I did that.

Finally, I looked at the classes that showed up the least in the FE8 roster. FE8 has a pretty varied roster in my opinion, which gave me a lot of options. Classes like Wyvern Rider, Monk, Shaman, etc. only show up once as playable units so I had no problem repeating those.

A fun fact about Amelia’s daughter Yvonne is that the reason she is a Pegasus Knight is a nod to Amelia’s original planned class being a Probation Flier.

That’s pretty much it. I wanted variety and some fun choices in classes that aren’t given a ton of love on the canonical roster. Hopefully the classes I picked will lend to some fun interactions and personalities.

If there’s a specific child I didn’t provide a reasoning for that you’re curious about, just ask!

Thank you! It’s cool to understand your reasoning a bit better here, although I’m still a bit curious about Oinone as a Myrmidon and Delta as a thief, that aside I’m looking forward to this and can’t wait to see more of their Portraits and eventually see how they interact with the canon cast and each other. On a side note I really like how vibrant Bean’s hair and eyes are, and Michail looks kinda rugged and bulky for a cavalier but in way I really like.

Michail and his sisters Marin and Minevar (? Child units would have an story or they will be like FE13-14?

Do you intend to have a little bit pick chapter of who would be the father or mother of the characters?

How will the story flow if Innes, Tana or L’Archel got pick as the spouse of the two pervious lords? They have there own child like Fife of Innes who would be the sister of Ria if he was the husband of Eirika and what will happen to Fife, Erroll, Bron’lach and other children who have there own parents from fe8 characters but have other partner. My opinion i think you should have a survey who would be the “let’s just say” canon parents (sorry if sound a little rude i’m bad at words)

Do you have any intentions to have some old characters from Fe8 like Marcus from Fe6 and fe7?