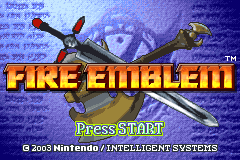 Hello everyone. This is my first attempt at a Fire Emblem rom hack, and I’m hoping it’s well received.

This hack is an attempt to rewrite Fire Emblem The Blazing Sword’s story to encompass the events of Lyn’s parent’s deaths as well as try to incorporate Lyn into the story as a more involved protagonist rather than a third wheel. Pretty much all the scenes have been rewritten to account for the 6 months gap in time this create, with many additional characterization scenes added. Expect old favorites like Batta to play a more involved role

Right now the patches covers the events from Prologue - Chapter 3 End. I hope to make the game into a full fledged rewrite if time permits, but for now this serves as a demo of my ideas as this point in time. Please let me know what you think.

Please be aware that while this hack endeavors to place a greater focus on Lyn, it doesn’t intend to instill her as the central protagonist or change the greater plot. Eliwood, Hector and Lyn will all have equal importance as the story develops and the other protagonists make their entrance.

Also, do try to activate talk events whenever they become available on maps. As the plot will assume you’ve had these conversations. Characters that can talk to a selected character will have a yellow bubble appear near them for your convenience.

Join our Discord server below:

Check out the FE7 Retold community on Discord - hang out with 2 other members and enjoy free voice and text chat.

I tried to get the patch, but it is blocked and I need to request access.
Just letting you know.

Fixed. Thanks for letting me know

Isn’t Madelyn the daughter of the Marquess of Caelin? If she’s no longer tied to Caelin through birthright, how will you alter the story so Lyn has a reason to fight Lundgren?

Oh that hasn’t changed too much.

You see, rather than have Hausen (Marquess of Caelin) suddenly get worried about his succession after he hears about his daughter’s death (which just comes across as cheap) he’s slowly began to regret his decision over the years. Kent and Sain are sent out to look for Madelyn (nobody in Caelin actually knows Lyn exists).

I’d love to say more, but you’ll have to play the hack to learn the rest

so this is just entirely non-canon/fan ideas, right?

Yes. Hence why it’s a rewrite

The characters are remaining true to their original portrayals, I’m just expanding upon some missed opportunities like the Taliver Bandit attack that are only mentioned in passing. To give Lyn some actual contribution to the plot as a protagonist, rather than being a third wheel in the second half of the game.

Like I said in my opening statement, I’m not looking to change the wider plot, just how and when certain details are revealed. Nergal is still going to be the main antagonist.

Yes, what gave you the impression that she wasn’t?

The screenshot says Madelyn is a Sacaen nomad and she has green hair.

She’s lived on the plains for like half her life at this point. I’d say it’s an accurate description. It’d be like converting religions irl.

The hair is a minor detail I’d be up for changing. Never really thought about it tbh. Just thought it made it easy to identify her as Lyn’s mother.

Yes, that makes sense, especially if she identifies with Sacae more than Caelin.

Question? Are there going to be new playable characters? Or npc becoming playable? Or even bosses becoming recruitable?

I don’t have an plans at this point in time for adding new playable units. Although, I have been playing with this idea of having

join for a short spell, at a much later date. Sort of like an ‘the enemy of my enemy is my friend’ sort of deal. Just to give Lyn some moral conflict. But it’d take a while to build to it.

Hey are you anyway taking some suggestions of potential new playable characters in this rewrite?

I’ll take suggestions, but no promises. It depends on how plausible I feel their inclusion would be. But feel free to shoot your shot, you never know.

I do have two in mind. Those being Eleanora and Hellene. For Eleanora im assuming that Elbert stay dies in this rewrite. So Eleanora reason to join her son army to avenge her husband death. And as for Hellene i think her reasons is to get back at the Black Fang for threatening Zephiel life. And to also protect him. As long the Black Fang is around Zephiel will never be safe. Thoses are my two suggestions right there. What do you think?