Hello there! I’m Horrific, and ever since August 25th 2019, I have been working on a romhack for FE7 named ‘The Dark Soul’. There is currently 21 chapters (including the prologue) and is about 2/3rd of the way completed through the main story, not including any postgame content. Including postgame content, I shoot for around 36-38 chapters in total. Unfortunately portraits are currently just recolours as I have the artistic ability of a drunk snail and struggle with even the most basic of things. 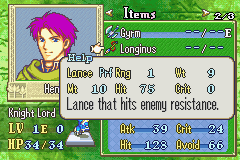 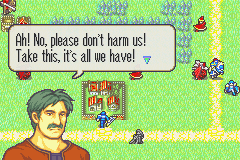 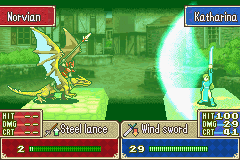 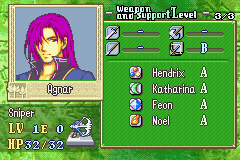 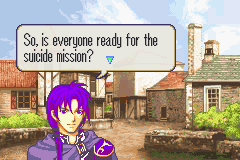 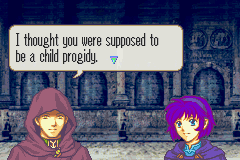 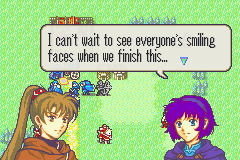 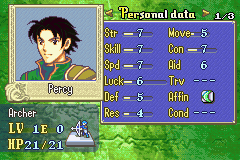 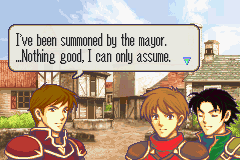 Embark on a fast paced story of corruption, family, despair, depression and grey morality as our heroes struggle to keep going and do what is right against insurmountable odds.

What is offered by this hack?

Meet some of the characters:

Lord and main character of the first story, as well as the oldest of the Fierrh family. Was appointed as the highest ranking general of the Ganarian army. Troubled and haunted by the ghosts of those who he was forced to kill, he turns against his king in The Fierrh Revolution, swearing to fight and do anything he can for the people.
“The people of Ganaria will suffer in poverty no longer! People of Gurang village, will you stand beside me in this revolution!?”

2nd youngest of the Fierrh family, and the most intelligent of the bunch. Serves as Hendrix’s brother, tactician and adviser throughout part 1. He is sarcastic and quite the joker, yet still caring deep down.
“Hendrix, I know we said we’d help you, but we didn’t say we’d help you commit suicide.”

Youngest out of the Fierrh family and a gifted mage with extreme potential. She is talkative and bubbly when around her family, yet filled with sorrow when she is separate from them. Looks to do anything she can to help others.
“Alright! Then i’ll do my best to help!”

The King of Ganaria. Ruthless and focused purely on war and conquest, with little regard for the people of his own country. He is despised by the people of Ganaria, and looked upon with hate and scorn.
“I seek to end all conflict, by ending all opposition.”

The King of Adraxia. A caring man, willing to meddle in other country’s affairs where he has no business in order to see the continent of Azall to a brighter future.
“If King Lamorak is removed from the throne, that is a benefit to not just Ganaria, but the entire continent, yes?”

The heir to the Adraxian throne, and King Maximus’ sister, as well as a close friend to the Norvian queen. Similar to Hendrix, she is willing to do anything she can for the benefit of the people, as well as to avenge the innocents claimed by war.
“To think such brutality is possible. We must put King Lamorak in his place.”

The Daughter of the Divine Dragon King Larkeicus, and princess of the Dragon Kingdom of Dragalia. After observing humans for centuries, she chose to run away from her home and abandon her dragon heritage, choosing to be human instead. Keeping her identity a secret from everyone except her closest friends, she wishes for nothing more than companionship.
“Companions… friends… Strong bonds are hard for us to come by.”

A young boy from Ganium village in Adraxia, and best friends with Alex. He is a protagonist in the second story of the game, and trained for battle since a young age.
“In reality, he’s just another general for us to take down. Sure he’s stronger than the last, but he’s still nothing special.”

A young boy from Ganium village in Adraxia, and best friends with Percy. He is a protagonist during the second story of the game. He is selfless, and follows Percy’s footsteps in training for war, despite being more versed in academic skills than battle.
“…That is a really complacent way to view things.”

And Join the discord here!

If playing on Casual Mode and a unit with Supports dies and comes back next chapter, they lose their supports and other people’s supports with them.

In chapter 9, sometimes one of the reinforcements will appear on the Gate, rather than a usual spot.

In chapter 16, visible enemies will not appear until you click on a unit. HP bars and warnings also seems to be glitchy in this chapter.

You mean a small cast of characters, right?(Possible mistake in the description) Other than that, this seems really ambitious(I mean, almost 40 chapters is nothing to cough at.). Hope this Project will be successful.

this is truly the dark souls of fire emblem hacks

Oh hey, a FE7 hack. You don’t see a lot of those as of recent. I’ll probably give this a try.

I think some of the sprites could use some work, namely with the colors (I’d totally be up to fix them later btw), but I’ll give this hack a try later.

Unfortunately portraits are currently just recolours as I have the artistic ability of a drunk snail and struggle with even the most basic of things.

Might I interest you in the Mugging Blitzes on this forum? They’re repos with free to use sprites that anyone can use, provided you give credit. 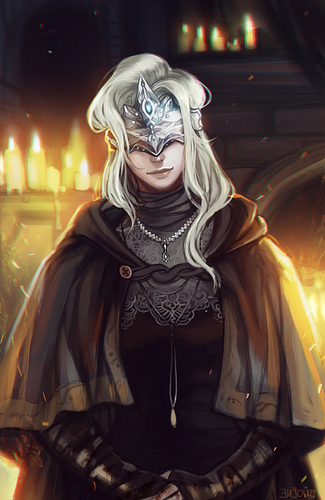 Those hair colors seem real bright, and ever-so-slightly sharp on the eyes…

21 chapters, huh? Sounds like a fair amount of work has been put into this. I might give it a swing in a few weeks when my schedule clears up.

When I read the topic title I expected something like this: 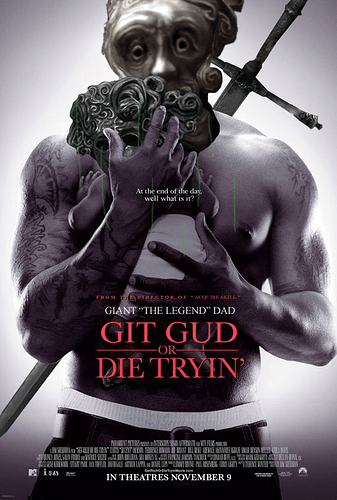 I dunno what I expected with this as the game title.

It’s relevant to the story, I swear!

So I’m currently on Chapter 19 meaning I haven’t quite finished the game. However, I’m close enough that I can posit this question before getting into more technical problems and see where the discussion goes from there:

Exactly what leads you to believe the story you’re trying to tell requires 38 chapters to tell? If I were to ask you what the purpose of a hack that long was, what would you answer?

It’s not necessarily one story that takes 38 chapter. I apologies, I should’ve been more clear.

The first story is Prologue up to Chapter 10, where you play with Hendrix’s family + Eslavia, Eschel and Petic. It does have tie ins to the 2nd story, though.

The second story is Chapter 11 up to Chapter 30, making it 20 chapters long. This will be the main bulk of the hack. We’re up to 31 chapters right now.

The final bit is a more side-story bit post-game. I don’t want to spoil much of it, but it’s essentially a non-canon version of chapters 21-30 from a different perspective. It’s not too planned out rn, but its probably going to be about 7 chapters long, bringing the total to 38.

Which brings us back to the original question: Why does this story require 31 chapters to tell? The original FE7 had the same length and the problem I’m trying to allude to wasn’t quite as exacerbated in that game as it was in this one.

Without too much spoilers, at the end of chapter 20 the story does take a turn. I planned out the chapters in context of the story rather than saying ‘I want to make a hack of x length’ and it came to that number. Each chapter (aside chapters 1, 16 and 18, and arguably 12 I guess, though those are more transitions to the next big chapters with the exception of 12) serves to either introduce central characters or has relevance to the overall plot with fighting a central antagonist or general plot stuff. If that answers your question at all.

It doesn’t. Simply put, the problem is that the “fast paced story” is so fast paced that the player has no time to give hide nor hair about the characters or setting. A good portion of the characters in the hack are the most bare bones characters I’ve seen in a hack since Corrupted Theocracy. Among the Fierrh family, for instance, there’s virtually nothing distinguishing the characters of Hendrix, Katharina, and Noel as they are all little more than Nice Guys™ who are Nice™. This is especially disappointing in regards to Hendrix as there are scattered pieces of his character that, if cobbled together, could create something that at least has definition and a real identity.

Oh, I apologise for misunderstanding and for the lackluster story experience.

I could attempt to counter such definitions (aside from admittedly Katharina) though I won’t. I would like to ask if you have any particular ideas as to how such can be improved while keeping the overall narrative, though.

For Noel and Katharina I haven’t put much thought into it, but I have put a little thought into how to add definition to Hendrix’s character.

All throughout my notes I have complaints about how Hendrix has a tendency to make and act on incredibly stupid decisions. With the way the story is written now, these seem like instances of enforced stupidity based on poor writing, but that doesn’t necessarily have to be the case. It’s clear in the narrative that Hendrix is quite naive and sheltered when it comes to the plight within his own country, so it could easily be explained away as him having his emotions cloud his judgment and him making decisions based on what will satisfy his own conscience rather than what is actually the right thing to do (Such as him trying to use the Dark Soul to martyr himself despite how unpredictable and needlessly self-destructive such a plan is).

I’ll definitely take that into consideration and how to portray it better and the direction his character goes forward. Unfortunately there’s not much for Noel in the ‘second’ story right now, though her character is already planned to be delved more into when

Thanks for the critique, I appreciate it.

A couple more things to consider for redefining Hendrix’s character

•In chapter 4 Hendrix appears quite confused about what being a king let alone a reformist king will end up entailing. He tells Noel that they’ll be able to see each other all the time after he becomes king, but that’s hardly true. This opportunity should probably be used to explore exactly how qualified Hendrix is to be king and why he believes he should be the one to succeed Lamorak. If it were me writing, the reason would probably come down to “I know I’d make an awful politician, but at this point anyone is better than Lamorak and I’m the only one in a position to do anything about what he’s done”. You could further cement this by having him consider Adraxia annexing Ganaria and having a reason for rejecting it.

•Chapter 7 has the gang take over a fortress that they never use for the rest of the narrative. It’d be nice if the reason Hendrix decided on it was because he wanted to vent his anger at what Lamorak had done to his own people and his own inability to recognize it beforehand. You could then follow it up with Feon pointing out the obvious that Hendrix has no plan for what he wants to do with his newly conquered fortress. This would allow you to show that Hendrix has his heart in the right place if he wants to be king, but that he needs to think before he acts if he wants to be a proper king.