Documentation for the locations of various things in the FE8 prototype rom, as well as a way to read them using FEBuilderGBA:

If you put this information in a file called <romname>.custom_pointer.txt in the same folder as the rom, opening it with FEBuilder will allow you to view the data whose location is defined here. This is more or less the bare minimum amount of information to have things working well enough to be reasonably functional, but there are over 300 values that can be present in the file as defined here so if anyone in future does further research on locations of data or anything else in the fe8 prototype feel free to add it here.

Here’s the same set of offsets for the 0206 FE7 prototype:

There’s more interesting in the data structures at these offsets than the FE8 prototype. FE8 even in the final release builds uses most data structures verbatim from their sizes & layouts in FE7, but FE7’s data structures are broadly larger and laid out differently in comparison to FE6’s. Here, the chapter data table has entries 100 bytes long, which is significant, as the final versions of FE7 have the table be 148 bytes long and FE6 has it 68 bytes long, meaning 48 bytes worth of data was added to each entry of this table between Feb 6th 2003 when this build was made and the final build on March 29th 2003 a month and a half later.
Additionally, looking through the chapters when properly adjusted for size of chapter data entries reveals this map that’s not in the final game and I don’t see on TCRF: 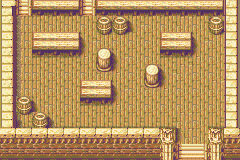 In the debug menu, there’s a chapter option named SAKABA that when selected attempts to send you to chapter 0x3C, and this map just so happens to be… chapter 0x3C! Actually selecting it seems to send you to Lyn mode ch9 though, so you can’t actually reach this map in game.

EDIT: It turns out, this map is still in the final game, but the tileset is missing there. Taking map 0x43 from FE7J, which is normally fully green void using the dragon gate’s tileset, and assigning the tileset used by this beta map reveals that it is the same map!

FE7 is more difficult than FE8.
The reason is that there is a mix of 6 and 7 in the data structure.
You have to update the FEBuilderGBA to show the CG.
Personally, I prefer this color scheme picture.

It is going to be difficult to see the SoundRoom and Class structures correctly because of the different data formats.

In line with song table & sound room stuff, went looking at the differences in music between the prototypes and the final game; FE8 is largely uninteresting since it’s just FE7’s soundtrack still from what I saw, but FE7 has a large number of both slight and major differences from the final including at least 1 song not in the final game at all. Here is an archive that contains all of the music in the 0206 prototype in .wav format, dumped with VGMusicStudio, as well as a text file that contains the differences I noted between these versions and the final ones.

Then there’s some that are significantly-altered versions of existing songs, like Arena Tactics:

Finally, there are the real interesting ones: entirely different songs! First is the song in place of Binding Ties:

Then, there are 3 instances of song indexes that are empty in the final game that contain songs in the prototype. One of them is just The Inn without background sfx baked in, but the other two are quite interesting:

You may recognize this song. That’s because it would later be used as Prologue from FE8. The other one doesn’t seem to have ever seen the light of day though:

I couldn’t place this one outside of it containing general leitmotifs present in FE7’s soundtrack, and I’m inclined to believe it’s an entirely lost song. There’s plenty of other interesting things, like Recollection of a Petal having an intro section that got cut or one of the renditions of the Fire Emblem theme having a part right at the end cut, but listing them all would take a very long time and I’ve just spent about 5 hours listening to similar songs and writing down the differences so I’m not up to that right now it’s all in the archive if you’re curious.

Finally, there are the real interesting ones: entirely different songs! First is the song in place of Binding Ties:

Well, hey, that’s FE6’s version of Binding Ties! I love when long-known prototypes are finally opened up in an editor and are revealed to have more turbo-interesting goodies.

Best I can tell there’s not a whole lot different, going through the music again there are 2 changes to the songs from the 0206 prototype:

For posterity, here’s the 3 versions of Recollection of a Flower:

Additionally, no songs after track 95 are in the 0206 prototype, but some of them now exist beyond that point in 0219:

I also filled out the tcrf.net page for the 0206 prototype with all of the music differences, if you want more than what’s in this thread

It has been documented before at least in part, but the last 6 animations have been added since 0206: 3 for generic berserker, Kishuna, and early Merlinus tent & wagon. Berserkers are identical, but the rest have interesting quirks. Kishuna’s anim is functionally identical to the final version, but is using more than 16 colors by mistake somewhere and the transparent color in the palette is different. Both Merlinus anims are a single frame in all modes:

For items, the Conqueror’s Proof has been added, which based on slot compared to the final game is later to become the Ocean Seal. At this point, it’s using the Hero Crest icon rather than a unique one.

Lots of items are using icons from generic weapons & items rather than the unique ones they have in the final game, this goes for all legendary weapons, the Emblem weapons & Emblem Seal, Fell Contract, Heaven Seal, & Flametongue.

In both prototypes, dancer rings are instead dancer scarves; they follow the same color palettes as the final rings:

Additionally, there’s 2 more items that follow in the trend of the dancer scarves that are entirely absent from the final game. Note that as far as I can tell, none of the dancer items have a use effect yet, and are all tagged as items instead of dancer rings. The first item is named 攻撃の衣 (roughly “robe of attack”), has no description written for it, and uses the same icon as Filla’s Might. The other one is named 攻撃の笛 (roughly “whistle of attack”), also has no description, but this time has a unique icon not in the final game:

These items would be replaced by the uber spear and 5-use chest key respectively.

The only other item thing I noticed is that Tina’s Staff from FE6 is still in the game (the other manga weapons aren’t), use effect and all. In the final game, this is replaced with the Dragon Axe.

All of these other than the Conqueror’s Proof are in both prototypes.

The size of chapter data table entries has increased by 4 bytes since 0206, though I’m uncertain what specifically was added.

To classes, there have been 2 noticeable changes since 0206. The second Transporter class has been added, at this point using the tent map sprite instead of the carriage one, and the Peer has had its map sprite changed to what it remains as in the final game. In the 0206 prototype, it’s using this:

Which would end up being used in FE8 for the Pontifex.

The duplicate F!Sage class used by (at least) Sonia in the final game is not yet present in either prototype.

Between prototypes, there’s very little that changes character-wise. Character 0x56 goes from a generic Black Fang slot to morph Jerme, and remains as such in the final game. However, there’s a number of substantial changes in comparison to the final game, mostly in the playables section.

Starting off, it turns out that IS was the original unoriginal GBAFE OC portrait maker, as Raven is a recolor:

Heath, too, is someone’s OC:

Character 0x2B is a copy of Vaida in the final game, but in both prototypes it’s instead イグレーヌ (Igrene). Clearly unfinished, she has no portrait at all, all of her base stat modifiers are 4, and her weapon ranks are A Swords, S Lances, and C Axes, though her class is set to F!Archer. Her affinity is also Anima instead of Ice as it was in FE6. Given the timeline of events in Elibe, if she was to appear at all it would likely only have been in a cutscene.

At this point in development, Kishuna does not have a portrait and is using one recycled from Ein in FE6:

Puzon’s mug is instead Glass, while Glass’s mug is…also the same

Crazy-eye Nergal does exist in the game, but boss Nergal instead uses a mug with the turban still on.

And Teodor is a Denning recolor:

Jerme is sans headband, both normally and as a morph:

(Note that Morph Jerme is only in the 0219 prototype)

In addition to missing a minimug, baby Zephiel has bigger eyes:

Murdock’s hair is a bit neater (and/or the mug is less finished):

This Hector emotion mug isn’t in the final game; Hector with this face is, but only wearing a cloak or fancy clothes, never in armor:

And finally, soldiers, villagers, and Anna are all still FE6 bois but with bootleg eye frames:

Briefly on chapter stuff, in 0206 the final chapters use the same map palette as 32x, but are their final green in 0219, chapter 13 uses a nighttime palette in 0206 but the final daytime palette in 0219, and Ch20 takes place during the day in both prototypes.

I think that’s all the stuff I can find right now, this was significantly more than I intended to write with this lmao

I dug into it and…

Looks like the Eliwood 219 Beta animation “looks” like final… but the crit is still the 206 beta motion.
For comparison this is vanilla: