I don’t make it a secret that I’m not a fan of ASM, but even then, I’ve done some very basic stuff that I figured I should put together somewhere, and thus this here SSS was created.

I’ll include whether there is an FEBuilder patch for it (and if not, why), the source(s) for more information if there are any, explanations and images of the result/how to do it. Thanks to 7743, Sme, Leonarth, Pikmin, Epicer, and Vesly for helping with some of these at some point. They’re currently FE8 exclusive, some specifically for FE8U only.

I see you like to do stuff with NPCs as an opposing army, hah

If you make a patch, I’ll register it.
In FEBuilderGBA, patches that fix multiple locations are implemented as switch patches.

The only one that I may have forgotten to ask about was the fourth one, which allows the player to steal from NPCs. I don’t know if it would conflict with other patches, but the patch file for what I described in the first post should look like this:

The others I already asked about previously, and I listed the explanation you gave me for why you didn’t add them to FEBuilder.

Also, I forgot to add GetCurrentlyPressedKeys to the first post, so I’ll be doing that.
EDIT: Done that.
EDIT2: Allow the player to steal from NPCs (green units) was added to FEBuilder’s patches.

Made one for FE7U, this enables Augury even on hard mode. It’s still disabled in Lyn mode.
For EA:

NAME.en=Enable viewing Augury on hard mode [FE7U]
INFO.en=Normally, you can only view Augury on normal mode. This patch lets you change that.
AUTHOR=Shuusuke

Hey there, I had been wanting to make it so that the rescue staff couldn’t be used on NPCs, and thanks to looking through your stuff, I was able to do it, so thank you.

The highlighted value is the one to change for anyone who’s curious. 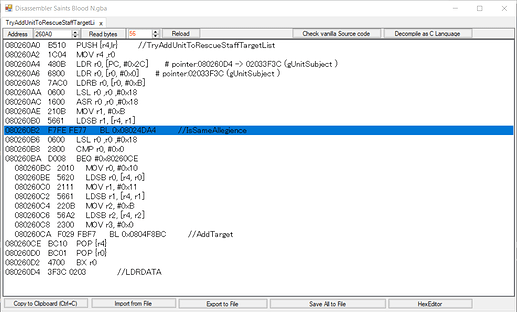 Finally, I venture beyond inline editing. Added Autolevel player units to the first post. Special thanks to Vesly and Contro for helping with making it.

EDIT: Updated the first post with 7743’s fixes to the routine.