As most of you probably know, certain recruitable enemies in FE6 don’t receive hard mode bonuses on hard mode (Raigh, Hugh, and Douglas). Originally, none of them were supposed to receive those bonuses (or so I heard), but units loaded as reinforcements skip the following check, and therefore get them.

If the character isn’t the in the table, then the game gets the usual hard mode byte (byte 0x13 in chapter data).

REMINDER: The following only works for enemy characters that are loaded in the initial main block. Removing Cecilia from this list won’t do anything because she doesn’t start out as an enemy.

If you want to make a character get the same levels as the rest of the people in the chapter, change their character byte to someone you know won’t get any (don’t make it 00, because then all entries after won’t get read). 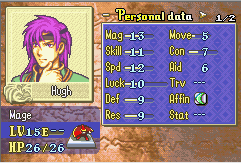 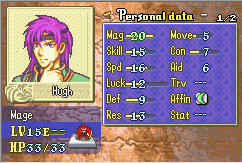 For those who may be wondering ‘where did all that mag come from? he only has a 30% mag growth’, remember that class growths are used here, not character growths. The male mage has a respectable 55% magic growth, meaning with 55x11=605 (+/- some number that I forget), he’s guaranteed to get at least 5 and probably 6 mag.

I wonder how development on this went. Did IS originally plan to give some characters a boost on Hard mode and changed their mind before they got around to thinking about player/NPC units? Or perhaps Cecilia was going to be recruited as an enemy at some point like the other generals.

I suspect Cecilia was going to be a recruitable enemy much like Douglas and Percival as it would have made a bit more sense than the way that she just kind of… shows up. Perhaps one of Percival’s appearances was meant to be Cecilia instead?

Hugh looks respectively bad ass right now. How would the others be like.