People say that Fe6 growths are bad. They might have a point, but I’m going to make fun of that anyways by creating the dumbest and lowest-effort hack possible.

Introducing Fe6, 100% or Nothing Edition! Basically, we took the total average growths of every character in the game (thanks to Adthor in the r/fireemblem discord) shown below:

You might have thought that Karel and Fae will heavily skew the growths, and you would be correct. They do and quite harshly, as a much-greater portion of the cast than I anticipated has exactly 40% atk growth, 0.2% off from ever increasing. This led to basically like 2-3 viable growth units for combat and was generally just not fun unless you were the biggest Alan fan. The solution was to make a new patch in which Karel/Fae were not factored in (they simply don’t exist) lowering the atk growth benchmark as well as other stats for a more enjoyable experience.

A google Drive to both patches:
https://drive.google.com/drive/folders/1JV_gyxDBw7p7d2PM5nMuOBA98Ze9SzgC?usp=sharing 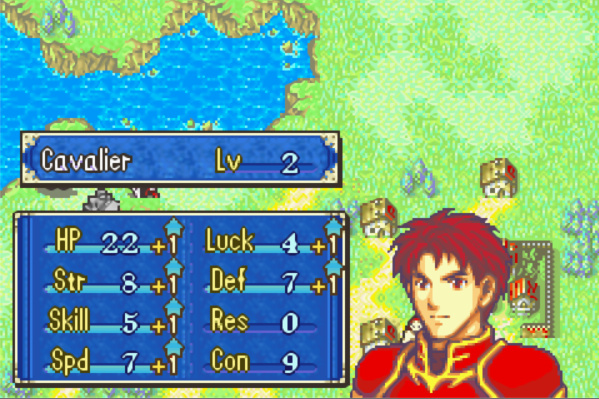 let’s look at how strange some units will look
Roy: Roy will level everything except for speed (how tf?)
Marcus: only res… still a really good unit
lot doesn’t level speed
Dorothy levels everything except def and res

there are still many more oddities but I’ll leave those for everyone else to find. Overall this hacks concept is great and the game being the binding blade makes the growths so funny to me and I love it.

This is when I realize that I messed up on Marcus’s growths when I made the NoKarelFae version, as he has a 0% in Res currently. It should be fixed now. But yeah, Roy in-between Original and NoKarelFae Edition got super jacked because he was another victim to the 40% atk gang.

he’s going to be doubled by nearly every enemy after the first few chapters, however you can’t be doubled if you one shot your opponent