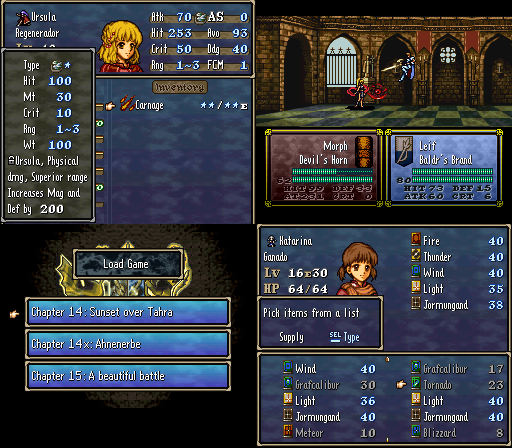 Maybe you’ve heard about Super Thracia, a somewhat infamous Japanese romhack of Thracia 776 by a certain LIN◆LIN/XxX/gw . It’s a strange crossover adventure, with a snowballing difficulty, revolving around Morphs, hordes of vengeful Arden spirits, “are we the bad guys?” and a nazi germany think-tank that employs children. It’s weird, yo. Fans of Thracia have always seemed fascinated by what the hell is up with this mod, so hey, let me help with that.

This translates all the menus, descriptions, names, classes, etc of the game, as well as all the chapter titles. There’s talks of making a full-blown translation, but this will have to do for now.

The UI is ported directly from my Lil’ Manster project, and includes a number of QoL improvements, like a modern menu command order, FCM display on the profile, Crt display in battle, and Zane’s sweet FE5 QOL additions !

There’s something both really cool and something really awful about this, but I can’t figure out what.

How hard is Super Thracia vs normal Thracia? (Never play either version)

It’s less of a Hard Mode, and more a suffering way of life.

Up until ch5, it’s basically “Thracia but bigger stats and a bit harder.” (Super Thracia’s 4x might actually be easier than vanilla’s). Then ch5 hits and it just keeps ramping up the difficulty until the game is spawning 50 wyvern reinforcements on your side of the map every turn. Sometimes, the difficulty relents a bit, and the game switches it up by just being annoying (unreadable map, invisible maze, etc).

It’s designed for savestate play, and the game wasn’t playtested, so cheats and glitch abuse tend to be the way to go. It’s still interesting with the things it does, and how cleverly dickish it can be at times.
It’s like a beached whale: tragic, but too fascinating not to admire.

Hey everyone, we’re releasing a newversion of the patch! It includes most of the newer Lil’ Manster additions, namely a new menu font, and Zane’s wonderful QOL additions.

That’s about it for now. Download link is in the OP. =]