Important Note: I have not been able to perform major playtesting, so it is possible events later in the game may cause issue. If you encounter any bugs, please let me know so that I am able to try and fix them.

Mostly what it says on the tin, this is a version of Fire Emblem: Genealogy of the Holy War where the characters from each generation are flipped (minus Iucharba, sorry buddy). For example, Sigurd is now Seliph and vice versa. 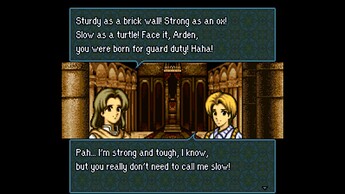 This isn’t as simple as just swapping the portraits though, growths and bases and all that have been adjusted as well. For example, Lana, who replaces Edain, uses Muirne’s growths and bases, and Muirne now uses Edain’s growths and bases.
There are many cases more complex than this, but I tried to stick as close as I could to this mentality of using substitutes as a blueprint when adjusting units.
In the case of skills, substitutes are still being used as a basis, although I have taken far more liberties here to make units more interesting to use than they would be if they were only a carbon copy of their substitute base.
For units such as Oifey, who aren’t a child/have no substitute, they were more directly implanted into the spot of the character they replace, and vice versa.

There are other minor changes, such as sword skill inheritance, which are noted in the provided spreadsheet.