Hi!
I have been making a randomizer for FE3 for some time, and in search of some docs editing FE3 to make more cool features, I happened to find some FE3 .txt files, that to my knowlodge, has been know for some time. But everyone that tried to view these files 99% of it has just messy garbage. After googling for a while, I managed to view these files in actual Japanese, and since I don’t shit about that language, I just throwed it into the google translator and made some notes along it. Despite the whole thing was been translated by a computer, it is surprisingly very readable!

Barst, Bord and Cord Triangle Attack (The best one)
Boss Exp bug fix (In vanilla, transformed boss manaketes gives normal exp, without the boosted boost exp)
Exp == Damage Dealt (changes to if the enemy is not killed, gives exp == damage dealt to enemy, but it is limited to the class exp)
Exp == Damage Dealt (same thing as above, but without the limitation)
Fixed Growths (Exactly as the name says, fixed growths)
Increased stat cap (Increases the stat cap to 30, HP to 63, LV to 30, and movement to 15)
Level not does reset when promoting (duh)
Siege weapons works in the player side (The player normaly cannot get siege weapons, but if they somehow gets one they be a bit unusable. This fixes it)
Unit in arena can bring their weapons (Playable units can bring their equipped weapon to the arena)
Varied bug fixes (Fixes Bord HP growth, Ice Dragons in arena, and some other thing that I can’t figure out what is it)
Weapon Accuracy (Even if the accuracy is 0%, the attack will have a chance to hit)
Infinite Weapons (Weapons have infinity durability)

Some japanese tools that I have no idea how to use:
(Both are the same file, use the one that works for you)
https://ux.getuploader.com/fekaizouwww/download/2

To debug my randomizer, I made some nightmare modules for the chapters to make my life easier. [image] It contains modules for all chapters, including even the Debug Map and some (probably) unused maps. Some explanations first: For almost each module, there is a (Hidden) or (Start) version. Units in the Start will always appear at the map before battle preparations or any event, and Hidden needs to be called with a unique event to show up at the map. (Like Reinforcements, or recruiting s…

Great, it’s about time FE3 had some more hacking stuff. It’s one of my favorite FEs that barely gets any attention.
However, when I clicked on the first file, I noticed that it didn’t exist. You should fix that link.

Alright. Where did you find the Japanese documentation? The document was talking about the FE3 Vyland hack.

I found it first in a japanese tool pack for FE3, which included Biraku Emblem, these documentation, the information about the hack itself and some premade FE3 portraits ready to use.
BE is probably used as a example for hacking FE3, or something along these lines.
Here is the original:

If you try to view these in a computer without the unicode being changed into english (idk if was that), the files will be just broken text, with the exception for one single readme with is for the patches.
Also, if you scroll down on the document a bit, there is a lot of information only on the vanilla rom, with the examples even being from there (Castor recruitment, the reinforcements in 2-7, etc)

Alright, thank you very much. I’ve been looking for that hack for a long time. I’m working on a more balanced and difficult FE3 hack, so this documentation will prove to be very useful.

Hmm, when I try to download it, I notice that the zip file is completely empty.
Must be an error or something.

I have no idea why that happens. I tried download some FE2 stuff from the same site and it was empty. Later when I tried it again it just downloaded normally and it worked. Very weird.

If you have the zip file yourself, then try putting it onto dropbox for a more reliable download.

There other folders not mentioned in the google translated doc, since I wanted more focusing on the biraku emblem folder. Here is quick rundown:
fe3_hard = What the name says, a hack meant to make FE3 harder (probably a inflation hack)
fe3_maptest = A patch with a custom map, testing how to edit maps
fe3 version 1.1 = There is two files of these, both are a different RNG algorithm made by two different authors.
A folder with a bunch of .ips files = The patches that I posted above.
shooter.ips = The siege weapon fix but for a 1.0 rom

You can find the biraku emblem folder pretty easily since the ips file are one of the things that are not corrupted if you are not using a pc with japanese unicode.

Again, thank you, I’m glad this is finally available. It works fine for me.

Hello! A bit of update.

I decided to upload some JP tools, that I have no idea how to use, probably except a bit for the map editor.
Here is the original download:


Here is the dropbox mirror if the site decides to be bad:

It contains even the english nightmare modules! Also the complete tileset from the other SNES and NES games.

I already have the FE3 map editor, and I’m glad to have more FE3 hacking tools out there. It sucked that the Japanese community had all the hacking tools for this game that we’ve never gotten the chance to use.

Well turns out FE3 portraits are almost the same as FE4 ones!

There is a very good tutorial for inserting FE4 portraits, that you can see here:

hi folks, Im gonna teach you how to insert portraits into FE4 so heres a step by step guide, pay attention class 1. First thing you need is a portrait, and the size of Jugdral saga portraits are 48x64. For this tutorial Ill use a picture of my furry...

You have almost to do the same thing, but with a few changes:

Above picture is using the Darros portrait from Biraku Emblem, since the author is nice enough to share it with everyone.

Reposting the links for the Biraku Emblem folder:

Here is a mirror if the site decides to be bad:

In the folders you can find the files, there is Darros, Frey, Evil Marth, Norne etc. Bin files are portraits, and .chr are palletes. You can just copy these into the rom using a hex editor.

Do these hacks not work with any of the English versions?

They work with the translation patch or the japanese roms.
If it doesn’t work, most of them are for headered roms. If you don’t have one you can just add one with something like TUSH.

Are they compatible with your randomizer? I’ve tried a few of them in conjunction, and they either kinda work, or not really. Wasn’t expecting them to be compatible, though.

To debug my randomizer, I made some nightmare modules for the chapters to make my life easier. 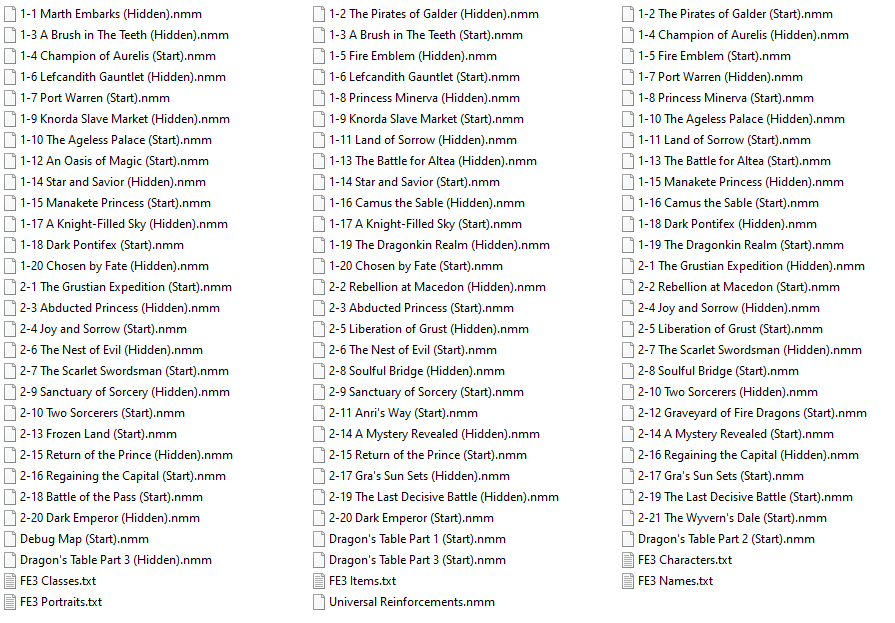 
It contains modules for all chapters, including even the Debug Map and some (probably) unused maps.
Some explanations first:

For almost each module, there is a (Hidden) or (Start) version. Units in the Start will always appear at the map before battle preparations or any event, and Hidden needs to be called with a unique event to show up at the map. (Like Reinforcements, or recruiting someone)

Now, there is a module called “Universal Reinforcements”, which are units that appears to have the same function as the hidden ones, are called with a different event from the hidden ones, and are not restricted to a certain chapter.

I don’t know if there is any in-depth difference between Hidden and the Reinforcements, but all that appears is that they are almost the same thing.

It is maybe to save more space to have multiple units appear in same maps, but some that are in Reinforcements appears just once (Khadein Mages reinforcements, Book 2 Astram shows up as a reinforcement only in one map, etc).

Some modules don’t have a Hidden or Start variant, because some maps straight don’t have any Hidden/Start units, so I just didn’t include it in there. (Look at the Book 1 Chapter 1, none of the units appears straight when the map loads).

As a fun note, Debug Map includes the only unit that is a enemy Female Mage and the only enemy who has a Nosferatu, and for some reason is using Marth’s portrait.