The 21st of January, 1994. Shouzou Kaga and his team of developers have finished creating the third Fire Emblem game, Mystery of the Emblem. In addition to porting a cut down version of the first game, a sequel to it was also included. It sold over 750,000 copies and was very well regarded in Japan. Yet in the West, RPGs were not a popular genre, and strategy games less so. With even the most famous of RPG series only inconsistently receiving translations, it was no surprise Mystery of the Emblem did not receive an official translation.

Fast forward to the 15th of July, 2010. Fire Emblem’s glory days had long faded. The ninth and tenth entries both sold poorly. The staff was completely replaced and reshuffled, halting the natural evolution of mechanics. To train up the new staff, a remake of the first game was created. The west were not pleased. In spite of the massive changes to just about every facet of the game, Shadow Dragon was decried as a NES game with a new coat of paint. Once again, it sold poorly. Nintendo of America determined that the next game, New Mystery of the Emblem, was not to be translated.

As Intelligent Systems desperately cashed on on their greatest hit’s nostalgia, they made many, many, changes. A long, unskippable eight chapter tutorial was added, to develop the player’s avatar character, new to the series. A casual setting was included, to make the series more accessible for beginners. The roster was dramatically expanded, going from 45 to 77 characters in size. And the plot?

The plot was butchered. Kaga swore that he would never add a self-insert character into Fire Emblem. But Kaga had left Intelligent Systems a decade ago, and his bridges were burned once he released Tear Ring Saga, the “other” Fire Emblem 6. The new developers had free reign to do what they pleased. Kris, to use the self-insert’s default name, was shoehorned in everywhere. From Princess Ellis telling them about his weaknesses, to constantly piping up in a vast array of scenes to say irrelevant nonsense, to having the vast myths and legends of Akaneia told to them instead of Marth in optional conversations, leaving the main story with no replacement. Even the last word of the game, once reserved for Sheeda, is now given to Kris.

Even without Kris’s presence, the story is effected. Right from the first chapter of the game, lines are cut out and the actions carried out modified. Implications of the corrupt General Lang killing Yumina and Yubello are watered down; the truth of the of the first king of Akaneia - Adrah - being a common thief is completely lost; the final fates of many of the dragon tribes, no longer mentioned. Kris putting silly hats on does not compensate for this.

The merits of FE3 and FE12’s gameplay have been endlessly debated. But in my eyes, comparing the stories of these two games leaves but one answer. The original story is superior.

This patch serves to undo the narrative damage dealt to Kaga’s tale. Kris shall no longer pop up to steal a line of Jeigan’s or to come up with Marth’s invasion plans. The missing details above, and a large amount more, have been restored to the script. Additional patches have also been included, to remove much of the new content to the remake and to move the game balance closer to the original’s.

Seeing that today is the 10th anniversary of New Mystery of the Emblem’s release, I, Darrman, feel there is no more fitting day for me to release this new and upgraded patch.

Old Mystery of the Emblem.zip

Base patch:
Restore FE3 dialogue where FE12 is missing or conflicting with it
Restore FE3 terminology according to 2008 VincentASM and RPGuy
Remove Kris from all main story dialogue scenes 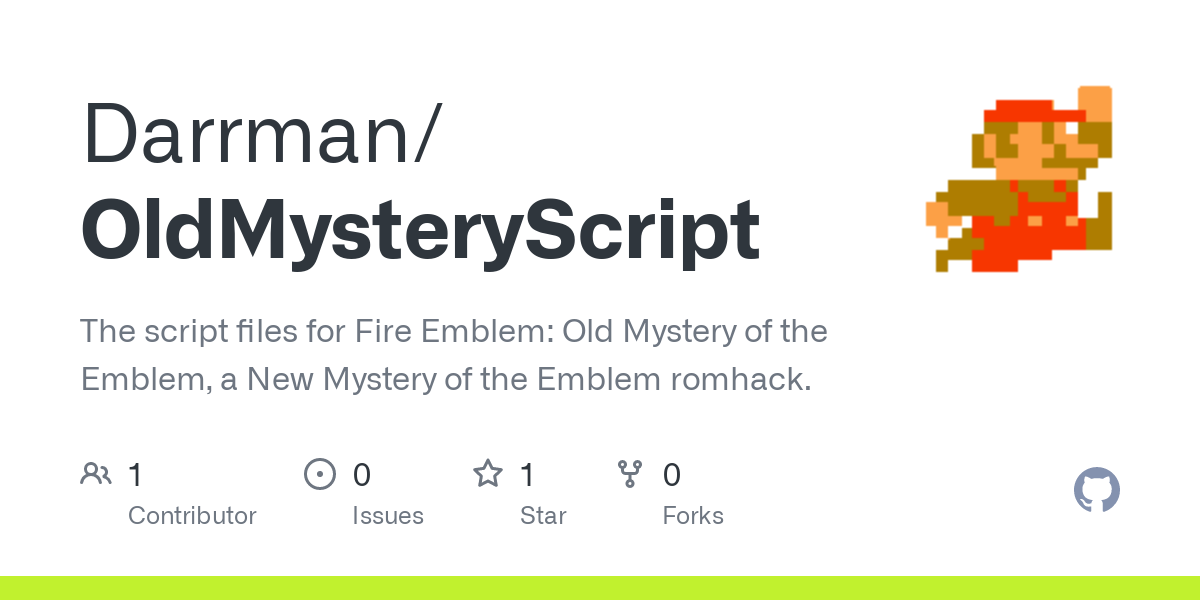 CREDITS:
Shouzou Kaga and Intelligent Systems for making the original form of this game.
Original FE12 translation by the Heroes of Shadow.
Text editing tools by Nintenlord.
Hacking for this patch was by Darrman.

TODO:
Modify the graphics to match FE3 terminology.
Properly edit the title screen to remove Kris in full and change the title to read (Old) Mystery of the Emblem.

are malice and frey in this game

Yes. No characters have been re-cut. Frey still comes back from the dead.

you didnt remove all the challenge and fun, not the true fe3 experience

caps are dead?
the hard modes have just been destroyed

remove reclassing
ok, I guess half the strats I know of for H4 are just fuckin dead now
remove prologue
Does the player automatically receive money as if they’d completed it with no deaths

Marth now starts with a Large Bullion, which can be sold in Ch1 prep to get the full 10,000.

Is Shoe Zoo Kaga one of the users in FEU? If so his hack, Fire Emblem: Mystery of the Emblem seems really cool. Paying tribute to him by making his hack in FE12 is so epic. It would be like remaking TLP in Three Houses. If you see Kaga in the Discord let him know his hacks are cool even if not as many people have played them as TLP by Blazer.

We meme but this is actually kinda cool ngl 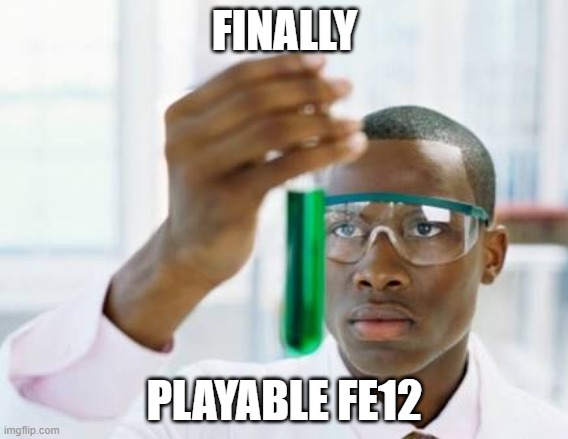 My hero. Thank you.

Nightmare modules used are based off of Blazer’s FE11 modules, with modifications and basic FE12 by Purple Mage and Mariode. Chapter data editors were by VincentASM. I then updated these for better FE12 support myself.

Yay thanks for the credit!

Oh, and could you make a version that just changes the story/script and removes the prologue and gaidens?

I’ve done a few more chapters of the line-by-line comparison. Have some Excel screenshots. Original on left, remake on right. RPGuy/VincentASM for FE3 and Heroes of Shadow for FE12 are the translations used.

Lines sometimes disappear from the FE12 version, while Kris often pipes up to fill the void. Some of the darker implications in FE3’s script also get watered down somewhat as well. In Chapter 3, one of the villages was completely and utterly replaced; the silver axe gives way to one of the axe brothers, and the message changed to match. It’s nearly FE12’s tenth anniversary, you know. The 15th of July’s the date. Perhaps I’ll have something nice on that date. I make no promises, however.

Update: the line-by-line script comparison has been completed. This hack now has two aims.
1: Restore any details in lines that were lost in FE12.
2: Purge any and all lines by or alluding to Kris within the main story.
In other words, basically revert the script to FE3 but with the more polished FE12 phrasing.

Today (in my timezone) is the tenth anniversary of FE12’s release in Japan.
I can see no more fitting day than to release version 2.0 of Old Mystery of the Emblem.
The script has been thoroughly combed over to include missing FE3 references.
Please report any bugs, especially with application of optional patches.
Enjoy a Krisless Akaneia!

This is the greatest DS hack ever. Kris is dead!