Hey! Crimson here. I’m proud to introduce my FE hack to the community: Fire Emblem Foreboding Dusk. This hack is to be a prequel to the Gamecube and Wii Fire Emblem games, following Greil (or Gawain as he was back then) 20 years before the events of PoR, and later on another iconic character we all love to hate. This game is currently in its Beta 1.1 (nice number I know), with Prologue and Chapters 1 & 2 available for play in the Demo Version. The Demo Version is set to reset upon completion of Chapter 2.

It’s the year 625 in the Daein castle-city of Nevassa. There’s a familiar face waiting for his apprentice, late as usual, to start his training for the day. The familiar face is Greil, or as he was back then, Gawain the Divine Knight. His apprentice, Zelgius, looking as young as ever. Typical Zelgius.
Gre- er, Gawain, doesn’t know it yet, but his destiny is about to be changed forever. He is destined to meet Elena, his true love, and run away with her to Gallia to ensure Lehran’s Medallion is never obtained by Ashnard. A few friends, some familiar, some not, will aid them on their escape. We all know the beginning and end to this story, but were we ever truly shown what happened?
[/spoiler] 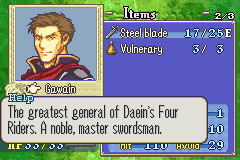 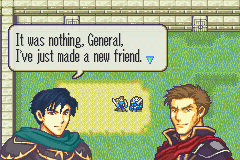 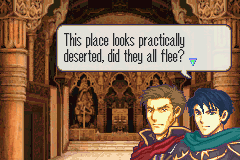 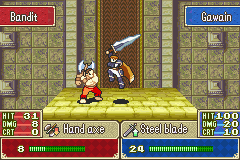 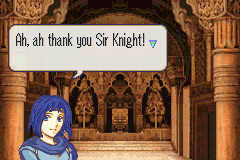 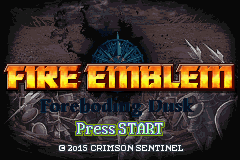 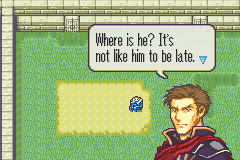 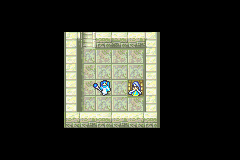 I’ve posted this here largely because I want feedback. I alone am the developer and producer of this game, and I’ve already written out a VERY thought-out storyline, including a timeline, which covers all the way up to the Mad Kings’ War. That being said, stories can always be edited and rewritten and I’ll take most of any criticism I’m offered. In addition, I’ll also accept any help I can get when it comes to things like Sprites/Portraits, which tend to take me forever, or Scripts (Ashunera knows I’m not a writer). This is my semester project in my Computer Science class, so I will be updating the Demo Version every couple weeks as I make progress. I want all the feedback you guys can give me, play the game, love it, hate it, whatever. Just enjoy yourself c:

Lastly, while the finished game will have a long list of IRL People to thank and praise, I wanna take a second and thank @Blazer, @Nintenlord, @Hextator, and @Arch for the shit ton of resources they’ve created and contributed, from the random forum posts to the massive textbook-sized tutorials which have taught me quite literally everything I’ve learned how to do up to now. Happy gaming!

I’m definitely going to try this out when I get a chance!

Issues I noticed:
When the enemies are coming in for the prologue one of them has the pegasus walking sounds

pls remove winds across the plains with extreme prejudice

I ran out of uses for Zelgius’ sword in the middle of chapter 2, which made him useless for the rest of the chapter

No boss quotes for Kasey yet?

Overall though I thought the demo was enjoyable and I look forward to seeing more!

Thanks for the feedback! I’m actually doing music/ sound room editing today, I agree that winds across the plains needs to disappear and never come back.
Also, wow thank you for noticing the pegasus noise, not sure I ever would’ve noticed it myself.
The details in chapter 2 have been put on my todo list as well.
Thanks again for playing the demo!

I’ll give this a shot later

You might want to check out NICKT’s Radiant Collection for mugs. They’re open source and free to edit, too.

Yeah, the Radiant Collection is free to use for any non-commercial purpose.
Do whatever you want with 'em, essentially.

Caveat however, in that they’re formatted and sized for FEXNA, so they won’t fit in FEGBA hackboxes.
I also plan on re-making the Tellius series in FEXNA, so I’ll be looking forward to seeing how this project progresses.

Hey to the peeps who have played and/or at least take note of my game. I’m sorry I’ve been inactive for such a long period, shortly after I released the last version I got a nice case of pneumonia… So yeah.

Anyways, I’m almost set to release v1.5, but I have one question that I’ve been putting off extensively. Does anyone by chance know how to take away gold outside of shops? The concept of paying gold to do actions is integral to one of the chapters in the next release and I don’t want to release it without getting this bug fixed.

Anywho, the next 3 chapters are ready once I get this bug fixed, as well as several new songs, and retouched sprites, graphics, balancing, etc. See ya’ll soon.

You have to pay Farina to join you in FE7 so I think if you poke around the events for that chapter you’ll probably find what you need.

Thanks for the suggestion, I’ll look into that.

Hey just played through this and gotta say I like it a lot I hope you update it in the future.

Given the fact that the last post by the OP was over 2 years ago, yes.

@Crims0nSentinel let me know if you want this topic re-opened.