Greetings! Have you recently bought SRPG Studio? Developed an interest in making your own Fire Emblem-like game with it, but aren’t quite sure how to make things like physical/magical hybrid classes or decent-looking maps? Well, hang in there, because I’ve got a solution that just might help you get on your feet.

Introducing my new FE Clone Starter Kit! This is intended to act as an in-depth alternative sample project for the engine which demonstrates the use of features such as complex databasing, custom assets including graphics and plugins, maps for both story events and gameplay, and more. It provides a practical example of a game made in the engine which users can dissect and study to learn more about how the engine works and how to implement functionality commonly found in FE games. 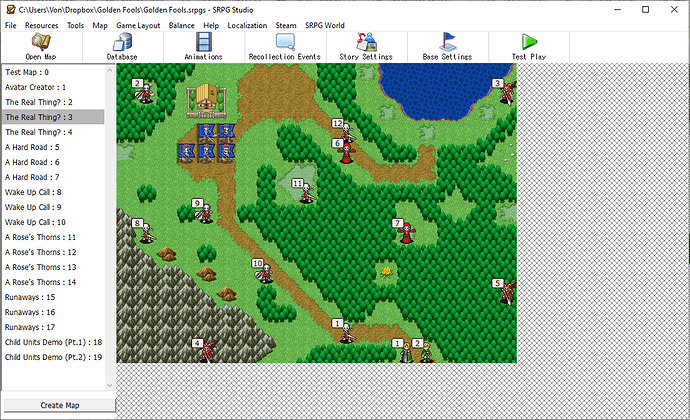 Here are some things this starter kit includes:

Now, as much as I’d like to, I cannot possibly account for everything a user might want to do for a game made using this software. Here are some things this starter kit does not include:

I hope that this starter kit aids you on your SRPG Studio journey. Hopefully it will do its job of helping new users learn their way around the engine kinesthetically. Who knows? Maybe even users who don’t plan on making straight FE clones might get a little something out of this.

Let me know if you have any questions or concerns.

EDIT: In the event I get further questions about GBAFE Support implementation, I’m just going to direct people to this tutorial: https://imgur.io/a/O2ak1Ih
Be warned that getting all the necessary stuff set up is going to be a massive pain.

EDIT (9/20/2022): Removed some excess animation types I’d forgotten about and added a link to some helpful development documents that might clarify a few things. It might help you when making your own games to create documents similar to these. Yellow cells are ones that should be safe to edit without breaking anything.

A proper Support system like those in modern games. Personally I’ve grown to find Support conversations in FE to be an overrated mechanic that doesn’t lend itself well to organic character development. If you’re looking to make an FE-type game in this engine, I strongly suggest experimenting with other approaches to unit bonding.

Get ready for the hottest of takes. I hate support conversations. I don’t dislike the conversations themselves. I despise the entire support system. If you don’t participate in it, your units become actively weaker. A non-supported unit is worse than a supported one, period. The difference isn’t slight either, +10 avo or hitrate is quite decent, and +4.5 damage can give you a big boost in power. Don’t even mention crit buffs and whatnot. Worse, the support system actively cuts you out of liter…

Jokes aside, this looks great! Now we have Romhacking, Lex Talionis, FEXNA, and SRPG Studio is finally starting to look really respectable! Especially if you’re looking more for SNES FE gameplay than GBA

While I disagree with your opinion of Support Conversations, I do respect it.

I love the second gens telling their mom who they want as dads I’ve never laughed so much.

And now another player has entered the war of Fangame engines

I’ll be sure to try playing around with it, great job man!

Yes! More SRPG Studio love. You can really make some great stuff on there.

I look forward to seeing what gets made as a result from this kit!

Im into using it, but Im getting this error after playing with Chapter 1, a little in changing the map. 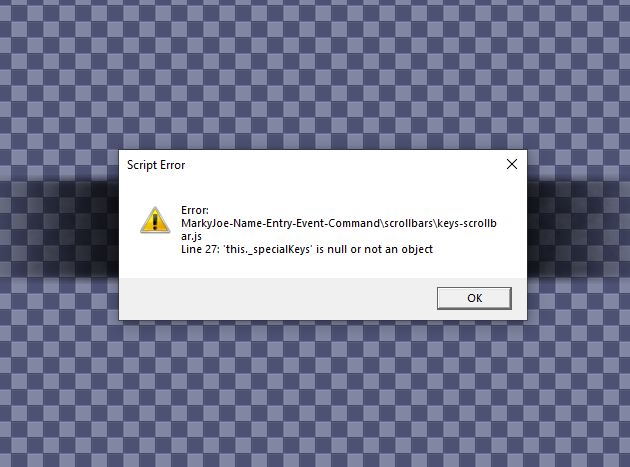 MarkyJoe’s name entry plugins require the graphics for the letter keys to be present in a folder titled “keys”, itself present inside the project’s Material folder. It should already be in there if you’re editing your copy of the starter kit directly.

What other changes have you made to this map? They would be helpful to know in case I need to replicate this crash myself.