How you use this feature is up to each of you.
I think we should do as we please.

So I think everyone should be free to do as they please.

https://drive.google.com/file/d/18Z9N7nHnXYdixmosG6VPMsdoNYNGMb1d/view?usp=sharing
yep, once again, thank you for your time

when Raigholm moves next to Near the game glitches out and eventually crashes, this has happened previously relating to other units but those issues have been fixed before. 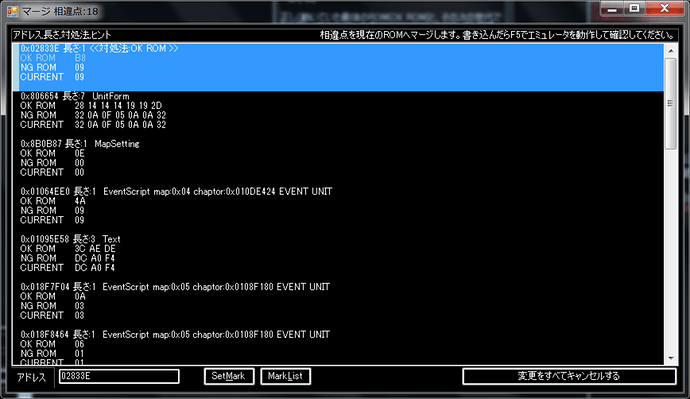 once again I thank you so much for this, I have no idea how this keeps happening.

https://drive.google.com/file/d/1lhmpjY53-b5zrrG7Tz4KLaVLA0KRZ41N/view?usp=sharing
I hope you can help me because I have got some issues with the Weapon Rank EX patch in my Rom which i hoped I could just ignore but now even if I am not to far in this rom at the moment it still is a bit annoying and I don’t know what the problem is there.
If you could see through it that would be great

This documentation is for those who may be confused by how the patch works. This patch removes the limit of one Max Rank Weapon, so you can have the S Rank bonuses apply to all weapon types. NOTICE: THIS PATCH WILL STOP SOME SKILLSYSTEM SKILLS FROM WORKING, LIKE Discipline. [image] Yes, I know, 5 editors is a lot, but it’s both necessary and easy to edit. DO NOT EXTEND ANY LIST UNDER ANY CIRCUMSTANCES OR THIS PATCH WILL CEASE TO WORK!!!

The patch in FEBuilder should note that the patch does not function. It did for a short time, then I added some code and everything broke and I have yet to fix it, I am sorry.

I see. I looked through the thread on FEU and found nothing about this, that it does not work probably. But it is at least good to know that this is not something that can only happen to me now.
Then I have to think what to do for the time beeing because from what I think only the first weapon ranks got this problems and not the ones after a specific rank. Maybe I can try to work with this for the now. Otherwise I have to think of another solution for the weapon rank system

Now let’s add a warning so that we don’t install it by mistake.

Those Skills have already been added.

Do you know who is in charge of that github?

Sme is the most in charge nowadays, though anyone can contribute to the github if they want

I have checked the github update and will adapt it next time.

To add in something I don’t know if you were made aware of, I believe the skill system has also been updated to include some function for alternate spell animations now. I’m not entirely sure whether it fixes compatibility with Spell Loader or adds its own feature for the function entirely, but it should be worth looking into for the next skill system version in FEBuilder.

Quick note on that: I’m the one who made that addition for the spell loader issue, but it turned out not to be used. I have plans on making a version that doesn’t rely on the Item effect rework and is compatible with Spell Loader

I’m currently working on a version that is compatible with spell loder.
I would like this to be the finished version, as it is hard for both of us to update it over and over again.
I’m releasing it for testing and would like you to test the operation.

Discord - A New Way to Chat with Friends & Communities

Discord is the easiest way to communicate over voice, video, and text. Chat, hang out, and stay close with your friends and communities.

I tested all the way to chapter 5 and everything I set out to test seems to be working flawlessly. All the animations triggered as expected with no crashes or glitches, all the new features of recent skill systems versions seemed to work as intended. The damage numbers updated as they should and always reflected results accurately, and the display in the upper corners of the battle screen for skills activating worked without a hitch too.

The black and white magic menus and magic in them also seems to be working as expected, though I only did cursory testing of that part.

I’ve never used the capture stuff before so I’m not sure if it’s intended or not, but I figure I should mention it just in case. In a chapter where the goal was to kill all enemies, I had captured an enemy to see what would happen at the end. The map didn’t end when the last free enemy died, and the menu to “drop” the one I captured was greyed out. I was still able to click on it and dropped an invisible unit, which allowed the map to end. I figure I should say it just to be safe.

If you’d like anything more specific from me, please let me know. I’d be happy to stress test this in any other ways you need!

Thanks for helping me with the test.
I am relieved that there seems to be no problem for now.
I would like to continue testing for a while. (At least for the rest of the week).

Let me know if you find any problems.

It works as expected.
It will have the same specifications as FE5.
Captured enemies will be confirmed dead the moment they are dropped.
If you do not do this, you cannot Capture the boss.
This is because the chapter ends when the boss is defeated.

The reason why the Drop was grayed out is because the captured enemy has an item.
You forgot to take away the weapon from the captive.
That is why the Drop menu is gray in color.
Of course, it is possible to Drop even if the color is gray.

You can apply this specification to leave an enemy who should not be defeated held as a prisoner of war.
An example would be Douglas from FE6.
He is Deployed with an enemy, but if he is defeated, he does not become a companion.
In FE6, you can guide him well and not kill him, but you can clear him more easily by using Capture to make him a POW.
You can clear the game while keeping him alive by capturing him, since you will not have killed him unless you drop him.

Note that if you never want to Capture a boss or a specific enemy, maximize CON or enable SupplyFlag for the Unit or Class.
That way, the unit will not be able to Catpure.
This is useful, for example, if the DemonKing is a problem in your scenario if he is taken prisoner, or if you do not want him to lose his weapons.