I got that, but one of the problems I have is trying to import custom icon graphics, but I can’t seem to do that without overwriting existing ones, as I don’t wanna have to use the iron sword for everything custom 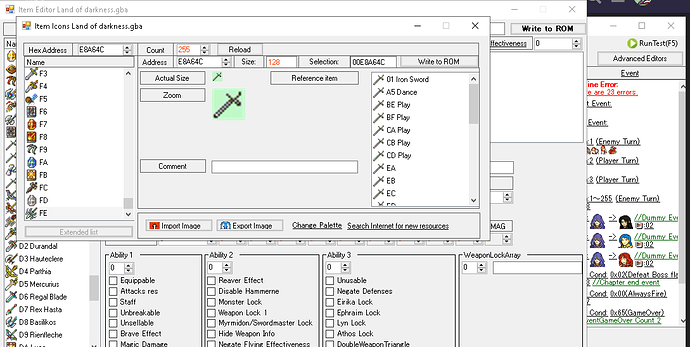 I don’t have that extended list for the icons. UPDATE: I figured it out how to expand the icon list, but the description for the item doesn’t show the weapon stats ingame

is your weapon a monster locked one? those tend to hide their stats, check if any of the boxes you click in the ability boxes are out of place.

A little question, are these two functions implemented in FEBuilder?
Tactician Naming

Want a tactician in your hack? Don’t want to miss out on all the cool FE8 stuff? [image] [image] Now you can have the best of both worlds! Simply place this code at the start of your world map events: REMSPRITE 0 //optional: use asm to write a name to 0x202bd10 to prefill the default name ASMC 0x48281 //name selection Then include this anywhere: PUSH ORG $44800 BYTE 9 //max name length ORG $482bA BYTE 9 //max cursor position POP As with FE7, use the [Tact] code to show the tactici…

Snake's Pit of ASM (and Other Stuff) Assets

Raid This is a custom location event that will allow you to do basically the same thing as visit, but it will show the custom name and description in the action menu, separate from the visit command.

Raid is not supported.

Thanks a lot, It worked perfectly

Does anyone know if it’s possilbe to try and restore unused items, specifically Idoun’s Demonstone or Darkstone? Actually reimplement it with everything working? Using FEBuilder GBA?

How do you edit the status screens? Not just in Sacred stones, but how you do change the graphics for the inventory, stats and support menus?

this screen has appeared to me all day, what is the reason, I’m already fed up? 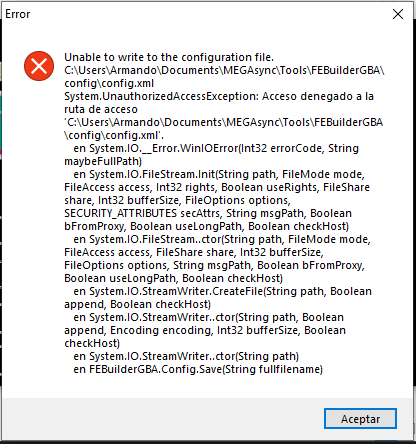 this screen has appeared to me all day

This is probably not enough information. Can you send a report7z and include what you were doing that caused this to occur?

I have no idea about it myself, but you could try re-installing FEBuilder.

How do you edit the status screens?

There are some patches for this sort of thing.
Tools -> Patches
Search: “Status Screen” maybe?

Regarding Idoun, are you asking about the battle animations? I’ve seen an fe8 hack use it, so it should be in the repo somewhere I’m guessing. Beyond that, I’m not really sure what it is you’re asking is possible or not.

forget it, I solved it, the configuration file was placed the attribute “Read Only” and I removed it, it is working well

Hello i have a question is there any way to add something like home castle? to be more exact lets say i make a castle or a cave and i make character be inside of it for protection while another character defends the castle or cave etrance

Does anyone know if it’s possilbe to try and restore unused items, specifically Idoun’s Demonstone or Darkstone? Actually reimplement it with everything working? Using FEBuilder GBA?

It is technically possible. There do not seem to be any bad effects to trying to restore them because they are all stable. The issue is making them work as intended. For the example of Idunns stone, it does not have the ASM for her animation anymore and I found no documentation on how to get that back working and I am too bad at hacking to do it without help. For other items, Bridges just do not exist so that needs custom code and the watchstaff-effect is also not programmed in. But there is nothing stopping someone from making it reality if they know how to do it. The unused weapons from FE8 seem to be working btw, alacalibur just needs sounds.

Misread, the question, this is why I should not read threads when half asleep.

You could probably fake re-implement the darkstone by slapping the stat bonuses on dark breath and swapping the icon. If you want a transform you’d need to draw one or something, but I don’t think anyone bothered with Manakete transformation in 6, though I doubt it’s much different from 8

I am having little problems with this, believes can help me?

My Errors in the Project

Hey, 7743, would you be willing to add Sme’s ‘Split Promotion Array’ to FEBuilder? I noticed FEBuilder did not have any of the ‘more than 2 promotion option’ patches in the engine, and Sme’s version is probably the best one.

[ASM] Split Promotion Items (FE8) Allows the usage of different promo items to result in different classes when used, similar to the Elysian Whip in DSFE. [image] It also retains the function of vanilla FE8 split promotions, so you can have items like the Master Seal give a choice and separate promotion items to force one or the other pick. [image] Download This hack is completely standalone and does …

First: The Start Event is repeat.

The event specifications are slightly different between FE8 and FE7.

StartEvent is in charge of the first turn event in Player Turns.
Therefore, please describe only the Start Event.

The event of the first turn in Player Turns is unnecessary, so delete it or specify 1 (Dummy). 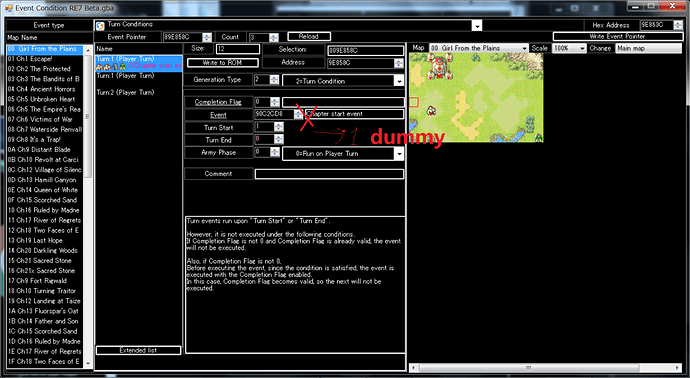 Second: I installed the Patch of tactician name but no request me for a name so this no show name when using the command [Tatc].