I’m… surprised that there isn’t a long haired female myrmidon yet.

I can make it. Do you want?

Yeah do it. But if you dont I will.

, I’m working on my project

Today, I spent 6 hours redoing and renaming every map sprite in the repo. They’re all in the dedicated Map Sprite folder now.

Well, there’s still a lot to do. But at least those map sprites are done!

Amazing work Klok! That means a lot. Keep it up

Spent a lot of time today doing some more reorganizing. 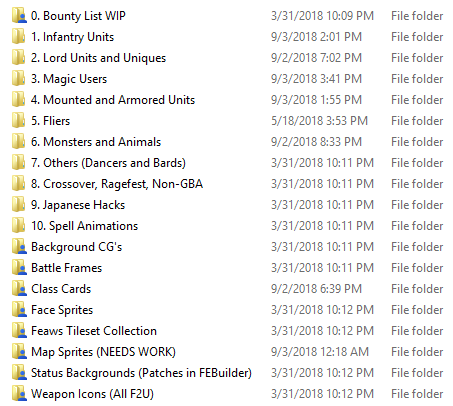 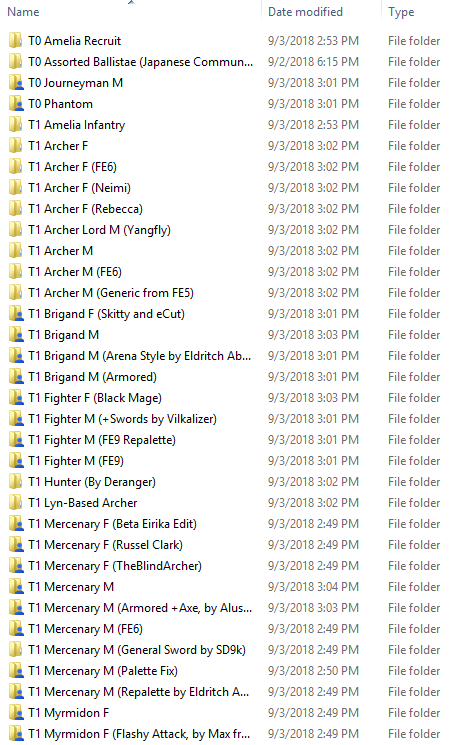 Classes are, generally, organized by tier, then name, then gender now.

Weapon types are now listed in the same order they appear in the rom data. Swords, lances, axes, handaxes, bows, magic, staves, and unarmed animations. I suppose claw/basic attack goes in there somewhere too.

I did run into a few issues along the way…

Now that Shin and I are working together, I’ve decided to abruptly change the top level organization for the Repo. It now looks like this: 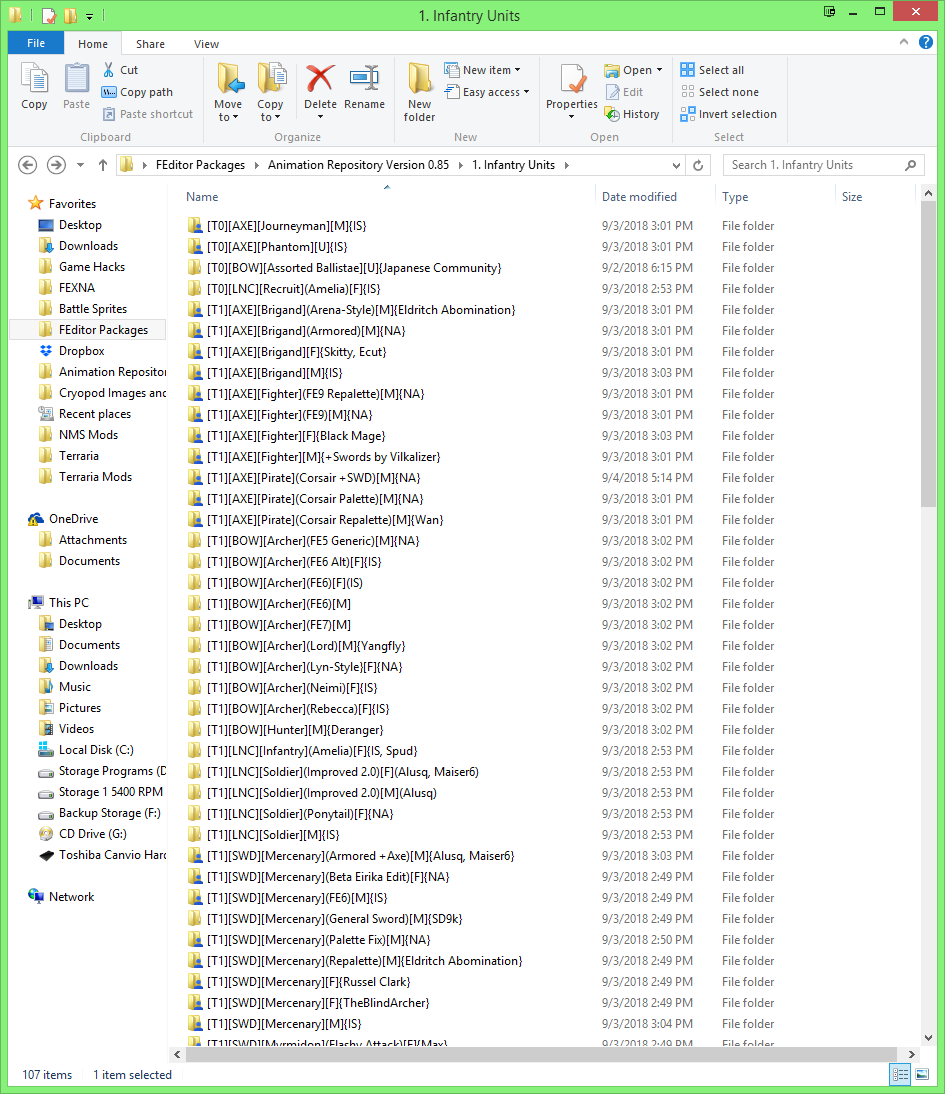 Harder on the eyes, but we’re going to focus on building a website for the repo and autopopulating it using a tag system and a few other neat filters.

Um, I’m new here so I have a question. Are all these animations free to use?

Yes they are, as long as you give proper credit to the creators.

There are only three genders, M/F/U, but U means Unassigned! They can be any gender you like!

In any case, I finished the Lord and Magic user folders today. It’s an extremely tedious process that involves retyping every folder name, and I know it’s not expeditable unless Elon Musk releases Neuralink for $5 tomorrow. 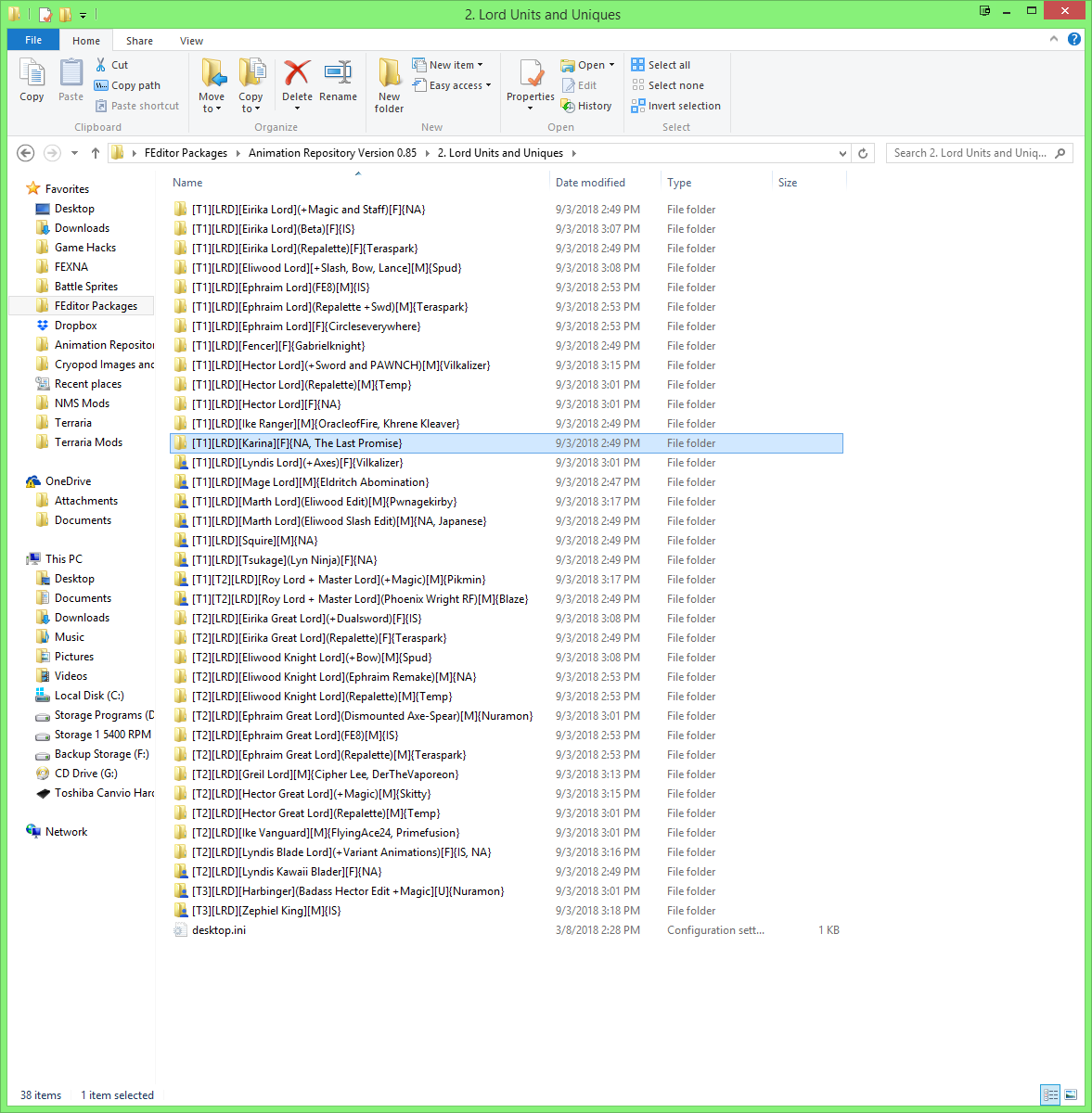 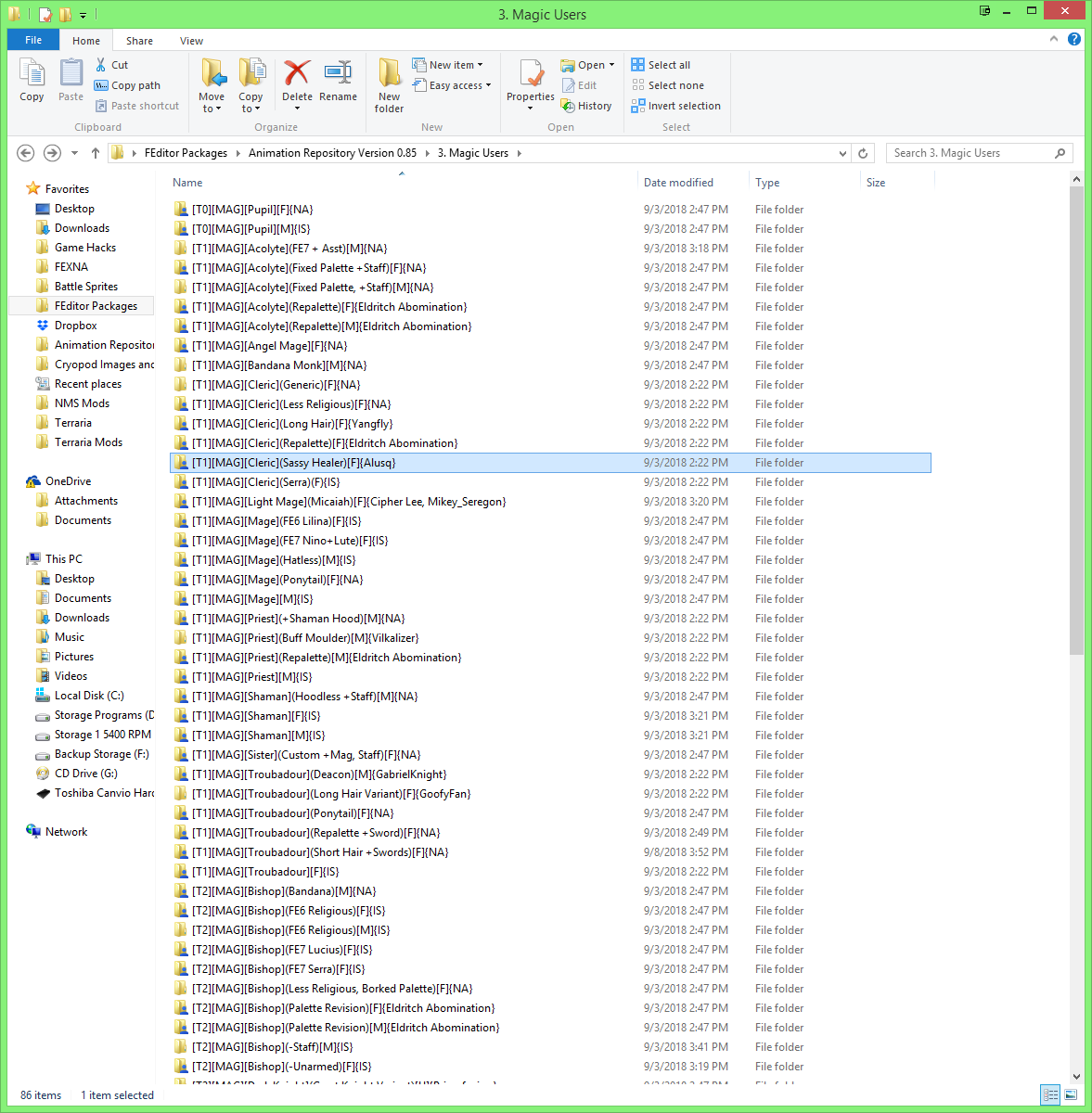 The organized naming conventions actually make browsing the majority of animations pretty simple. Alusq’s healer has a legit name now and nestles in with the other clerics quite well! Same for the others with weird names, like the previously named Myrmercidon, which now looks like the below. 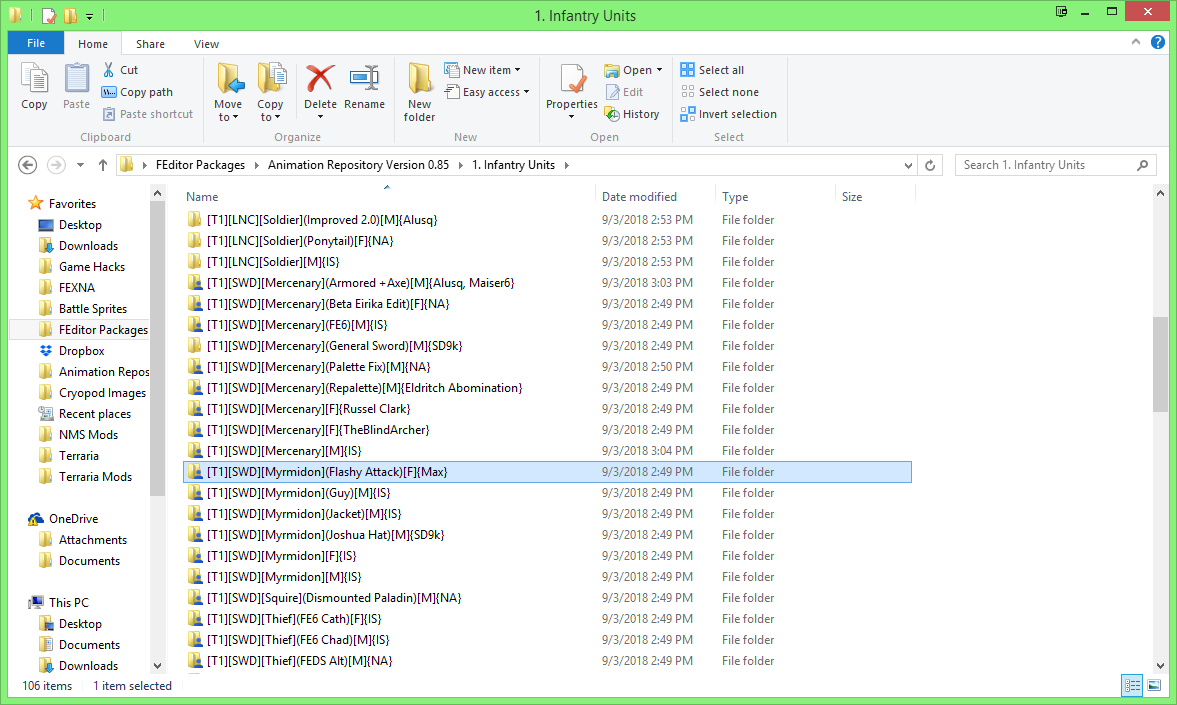 Things are progressing. That is good.

Footnote: I still have to add credits for anything tagged {NA} but that should be really easy as a final step when the repo is almost ready for release. This IS going to be 1.0 after all.

Edit: Mounted and Armored Units are done too. Not too many of them… 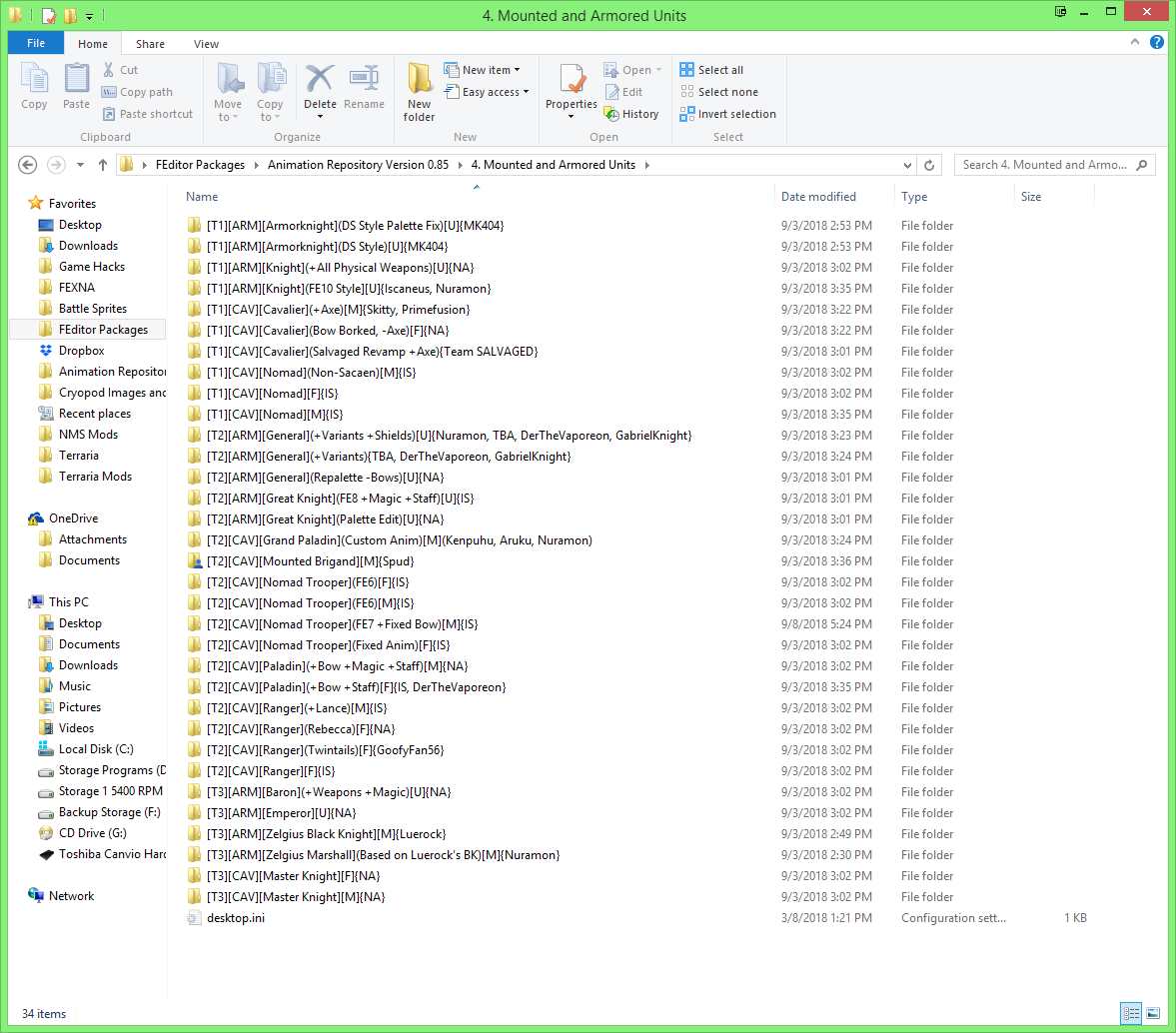 Edit2: Fliers were a breeze.

I haven’t added my folder full of animations to my repo build yet, so it’s all cool you PIECE OF SHIT but thank you for the wonderful animation of YET ANOTHER FUCKING SWORD USER which is helpful because we can never have too many FUCKING MYRMIDONS AND SWORDMASTERS REEEE

THANK YOU AAAAA <3
Great job on that one.

It’s always bugged me how bland Falcoknight grills look. With just a few added pixels, you made them look significantly cuter!

how do i learn to make new battle animations? I want to contribute

http://www.feshrine.net/ultimatetutorial/
Read Chapter 56 + 57. It’s pretty old but that part is still up to date.

That’s at least the way I’ve learned it.

Sorry this update’s taking so long, guys. I’ve been really busy with other things. Unlike when I first created the repo, updating the current one is -not- at the top of my priority list.

I will get to it though, and hopefully it will be great. 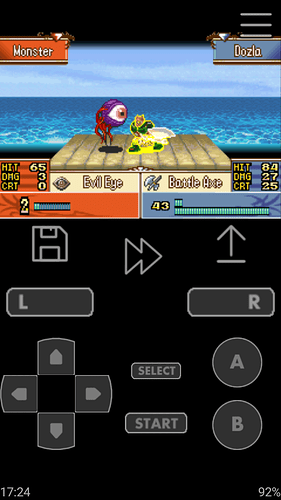