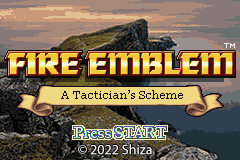 (Renamed from FEDK, as it was always meant to be a placeholder title.)

So, what do you like the most about Fire Emblem? Is it raising units from zero to hero? Epic stories about conquering half the continent? Or perhaps reading support conversations and playing cupid? If you answered yes to any of the previous questions, this may not be the project for you.

This is A Tactician’s Scheme, where you play as a tactician tasked with hiring mercenaries, and commanding them to victory. These mercenaries are generic, disposable units with a fixed equipment. You start every chapter with a predetermined amount of gold, and the only way to get more is by killing enemies and completing side objectives. The game is all about short term decision-making, as your both your party and gold will reset after every chapter, so it’s like RTSs or Advance Wars in some ways.

I’ve seen other similar concepts in the form of FE ROMhacks, but nothing quite like this (if you haven’t, Storge and Iron Emblem are worth checking out). If someone has already done this exact idea, then it’s too late to stop me anyway. And if it sounds a little daunting, I promise that it’s actually very easy to pick up and play.

Feel free to join my Discord server if you want to chat or help out:

Check out the Redeemers' Secret Hangout community on Discord - hang out with 41 other members and enjoy free voice and text chat.

Very cool premise - will be sure to check this out sometime. Nice work!

This was actually really fun; the gameplay loop of “need to build units to kill guys to get gold to build more units” is addictive, and your units mostly suck enough that you have to treat them as generally disposable. I missed getting the rightmost house and defeating Toby; I relied a bit on camping the cav spawn points to keep the enemy count low, but I think it’s lenient enough to get used to the gameplay. I didn’t train any of the monsters because ehhhh greenies.
Cool stuff for the story, I’m interested to see how much more Ellis will fuck things up to save his own skin

I want to state my enjoyment of the ‘demo’ to get a few more people interested if possible even if its quite early stages. The unique design aspects which separate this were executed very well in the first map.

Really cool idea! I love RTSs, so this seems perfect to me. I’ll try it soon.

If someone has already done this exact idea, then it’s too late to stop me anyway.

Don’t see it like that. I’d rather have two similar but amazing hacks rather than one. And if someone made something like this before, you can learn from it and see what works and what doesn’t!

Ahah the name of Hack picked my interest, not what you would expect from a FE hack, and the gameplay sounds as much unique as it’s name ! I will give it a try

Tried the demo, the flow of gameplay works really well and with the level design of the first map, there isn’t much risk of failing completely, there is always time to recover if you got too careless or didn’t pay attention to something !

For the story, it sounds like poor Ellis will ends up with very bloody hands, and I’m excited to see more both in gameplay and narrative

It’s finally here. Version 1.0 is out, which means the game is finished! For those who actually played the beta, I hope it was worth the wait.

I started this hack earlier this year, and I pretty much put it on hiatus after I released that version, so in reality, the bulk of this project was made in two months or less. I enjoy working on a single project 24/7 like a madman and when I don’t have the time for that, I put them off until I do. So, I came back to finish this last month, and I’m happy with the result so far.

I’m interested in everyone’s opinions, so if you play this, I’d really appreciate any positive or negative feedback.

I love this hack, but just to let you know, trying to use the ballistas in chapter 2 crashed my emulator. Also, chapter 5 and chapter 6 could have used some more enemies as they usually clear out way too fast.

Just finished my first playthrough!
That was kind of awesome actually?
Lenient enough to make clearing relatively consistent on normal mode, but with enough difficulty to give a sense of urgency.
Also the story popped off.
I didn’t know dogs had horse killing weapons… part of the game probably would have been a bit easier had I known.

I’m on chapter 4 hard mode, overall it’s a very neat concept for a hack but there are some stuff that’s pretty irritating at least on hard. First is the spawn point, oh god the spawn point when you hire a merc is god awful. they usually spawn in the corners of the starting area which really hinders your units from being useful when they’re hired. It might be intentional but tbh it really sucks especially for knights you need to use for tanking immediately. Second is the low crits and 60 ish hits on enemies, especially on chapter 3, with the swordmasters approaching, now it’s heavily suggested that lance knights are their counters and sure they can tank for a while but the swordmasters take 3 hits from them to die with 70 ish hit and they can still crit. The low hit is also a major problem with the monster units, being a monster lover i’d advocate for them to be blue but being green is interesting, if not for the fact that they have 40-60 ish hits on enemies. this really tanks their usefulness because not only are they green, have double prices for gorgons and lich, they also can’t hit anything.

then again it might be that i’m just rusty in fire emblem, but i really think the rng is a huge upset at least on hard, idunno if it’s a problem in normal but in hard i feel like some classes option are just straight unviable, like cavs vs knights, where you’d always want knights to tank for you vs the mediocre cavs.

@Shiza Thanks for this hack, it was pretty good and gameplay was very smooth.Very diff hack what i am used to but i liked it!

Alright so I’ve finished a playthrough of the hack and while i still do stand with my previous criticism I do think the idea of the hack is very neat. chapters 5 and 6 are pretty cool though like somebody else did point out, they could be a bit harder. On hard mode I think the correct balance would be a difficulty between chapter 3 and 5&6. Another idea would be to add more unit types you can hire as the chapters progress, perhaps even promoted units for high cost. I’d also push for the monsters being controllable and to change the spawn points for the hires. all in all tho the maps did bring a lot of interesting and novel mechanics that makes it unique. This is a pretty solid hack

IMO the dogs are the only monsters that need to be controllable as they have a niche that is entirely wasted if they’re green, but the centaurs/gargoyles are just gold-efficient “I need bodies!” buttons and the gorgon would honestly be insane with player control. The lich is kinda bad as it is right now; if it could spawn with more aggressive AI that somehow made it use staffs less that would be cool. Like, if it could only use staffs on even turns.

Yeah, honestly I agree with pretty much everything, lol. I suggested picking normal mode in the original post because it was the intended difficulty from the start. Hard mode is there just as an option for those who want something tougher, and those who already figured out what works better, but it’s a lot less flexible and not recommended for first time players.

And to everyone else, sorry for being inactive here. I agree with the consensus that chapters 5 or 6 are very easy (at least compared to the previous ones). I’ll try to remedy that in a future update. Thanks for the feedback!

Hello again, I hope you still remember me, one of your fans from China. After FoR, I played AHS again, and I think it is very interesting and the plot is still excellent. So I want to translate this heck into Chinese, I wonder if you agree? I promise not to modify any game content. Whether you agree or not, I would be grateful.

Sending you a private message!