I mean, it’s actually Rogue_like_ Emblem, so… it’s not a game featuring rogues

“What do you mean you’re not making a game with only sword-locked units who can’t promote? Kinda cringe bro”

But, yeah I think I just worded poorly my last post lol

Don’t worry Klok, with my godlike artistic skills you’re gonna get like, uhhhhhh, maybe 5 more colour swaps till then? I naturally expect 50% of the revenue for this huge contribution

I want to do more later, but for now here’s something that goes the other way around:
Joshua on my fancy Bard attire.

EDIT: When I made the palette swaps for my generic Bard I noticed I could turn one of the skin colors into a shirt color, so I made an updated version:

updated: [Hols] [laylea] F2E bacause it just even worse and i have no idea how to fix

Speaking of which, 11 days to the poll! Anyone working on other submissions?

I am. Can’t say when I’ll be finished tho.

Tell me Klokinator! Do you think that you can match wits with the Riddler?

Although most of it is custom, I still used some of BatimaTheBat’s mug to adjust mine, so credits to him too
EDIT: Fixed some minor details

So then. It’s time for my submission…

Bow, for you are in a presence of a king. His royal majesty: Milidain VII, king of Etruria, lord of the Isles, protector of Nabata, friend of the Faithful!

Oh my god, yes. That is such a cool Elphin. Wow.

And that Phina too, very cute! Her face is a bit smol by GBA standards, but aesthetically she’s awesome!

Only 5 days to the deadline!

Wait, is that king not Elphin? I haven’t played FE6, so I’m not sure.

You haven’t played FE6? What heresy is that?
Elphin is very similar to our boy Lewyn, he is a bard that is a secret prince. (Even his name - Elphin - is similar to French Dauphin, which was the title of the heir apparent). His true name is Milidain or Myrrdin depending of the translation.
I made another “older” character. Now he’s the king of Etruria after his father had passed away. If you compare the mugs, he wears the same crown and cloak.
I’m also super proud how handsome I managed to make him. I had this head canon where Elphin is super gay for Klain, but it’s a unrequited feeling.
But that’s super fanficky.

Updated my Phina mug to give her some frames

She is Brazilian now

Man I cut this one pretty close, huh? No matter, they were all worth the time I spent on them (Uploaded in order of when I worked on them):

So last time I submitted portraits to this, I created backstories for the submissions… And this round is no different. Me and my friend Pizza Delivery Archeops managed to come with a story that not only ties all 4 of these portraits together, but also my previous submissions, Sword Demon Karla and Meta Knight Karel. Full credit goes to him for coming up with this description:

“A night on Western Isles, what would one expect to see on such a ravaged land at such a late hour? Well, how about a flashing red sword? That’s what Homer saw one night in a window whilst he was walking down the street, he saw Karla, the now Sword Demon, brutally murdering Elphin, so much so that it was as if you could see his angelic figure.
And so Homer started running, he ran for his life as the legend of the Sword Demon was well known to his self, “If you see a flashing red sword, run without a second thought.”, he ran to the most reliable prosecutor he knew, Phina, and her assistant, Lalum.
With the help of these two, he decided to take Karla to court, but as it would baffle both himself and everyone else in the court room, Karel, the man who lost a eye to his sister in her sword demon transformation, would be right there to defend her.”

One last thing, all of these characters are dressed up as other characters. Phina is dressed up as Justice from Helltaker, Lalum is dressed up as Kay Faraday from Ace Attorney Investigations, Homer is dressed up as Guybrush Threepwood from the Monkey Island series (mostly based on his Tales of/LeChuck’s Revenge attire), and Elphin is dressed up as an Angel from the Binding of Isaac, although I gave him a face to make him more interesting. This round gave me the kickstart I needed to get back into drawing and creating portraits, so I thank you guys for that alone, I just you like what I have to show!

This is super cursed and super based.

Definitely a downtick in this round, BUT… still got some awesome entries, so it’s all good!

Let’s get down to business.

Which Dancer/Bard is the best?

Damb! What a close call! Wasdye slightly ekes out a win with just two votes more than Vilk! Close call overall, and still, this round had a lot of strong contenders. I’ve added Jey’s Elphin to my personal list of favorite badass remade mugs, along with Sterling’s sultry Homer and Wasdye’s Phina.

I’m switching things up a bit for Round Seven! I’ve decided to try a round consisting entirely of non-GBA characters! For this round, I let Wasdye pick two units, then tossed in a third alt for people with less spriting experience.

Character 1: Mia from FE9/10. She has some mugs in the repo, so she makes for a good base for less-experienced spriters to try out. 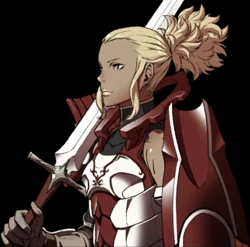 (Note: All mugs above are from the Repo. You can use them as a base for your own sprites, though obviously starting and making your own is always preferable.)

It is a modern tragedy that Flavia has no assets in the repo. I’ll post the next topic here in a few days, and in the meantime, you guys can mull over or start work on whichever of these characters appeals most to you.

No community voting this round because… frankly I’m too tired to set up a poll. If anything, I might jump for someone the community voted for in one of the previous rounds, but I actually think 4 characters are too many, after this round’s turnout.

See y’all in a few days!

Welcome to the next round in my continuation of the previous CCC’s! The goal of this contest is to take an existing character (posted at the bottom!) and reimagine, reinvent, or rework them into a new form! What sort of new form? Taking inspiration from FE Heroes and other similar media, you simply redesign the character in one of (but not limited to) the following ways: [image] [image] De-age or age up the character. Make them younger, or make them older. Turn them into another character! …

Sorry this took me several days, but it is currently 117F (46.5C) outside and I have been suffering for DAYS. Finally got my AC fixed, now I can return to my normal work.