Can you break vanilla Fire Emblem?

Serious answers ONLY!!!
I’m curious. are there things we can do in the vanilla games both Western and JP only titles that can actually cause a visual glitch, gameplay malfunction or outright crash?
the only thing i can think of is the mine glitch. Any others come to mind?

Are we talking without use of cheating devices? In FE7 Lyn mode, u can’t attack from 2 spaces away in the first 2 chapters. Not that you would have a unit that does that but I made Lyn a mage once and it crashed on me when attacking from a distance.

i wanted to keep it vanilla, but that’s an interesting tidbit. The tutorial will break if you try to attack at range? I suppose that counts

The pierce glitch comes to mind as another pretty famous example. 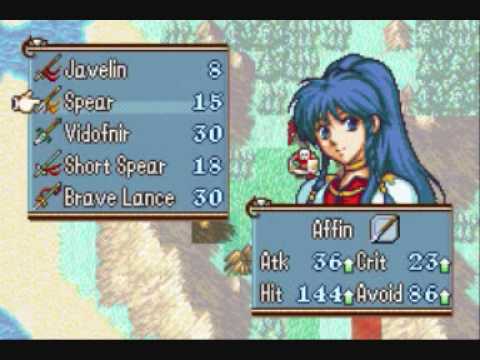 This is from my playthrough of FE1 Switch. Call it a hunch, but Manakete Def might be broken.

I know there’s a visual glitch when the necromancer uses normal tomes, I think the transparency breaks
Also, adding to the mine glitch, there’s the control enemy glitch in fe8 that can be used to effectively give any unit a dark magic rank.

The Rescue Staff bug in FE4 is probably the most exploitable glitch that I know of. If abused to its full extent, it can basically skip half of FE4. 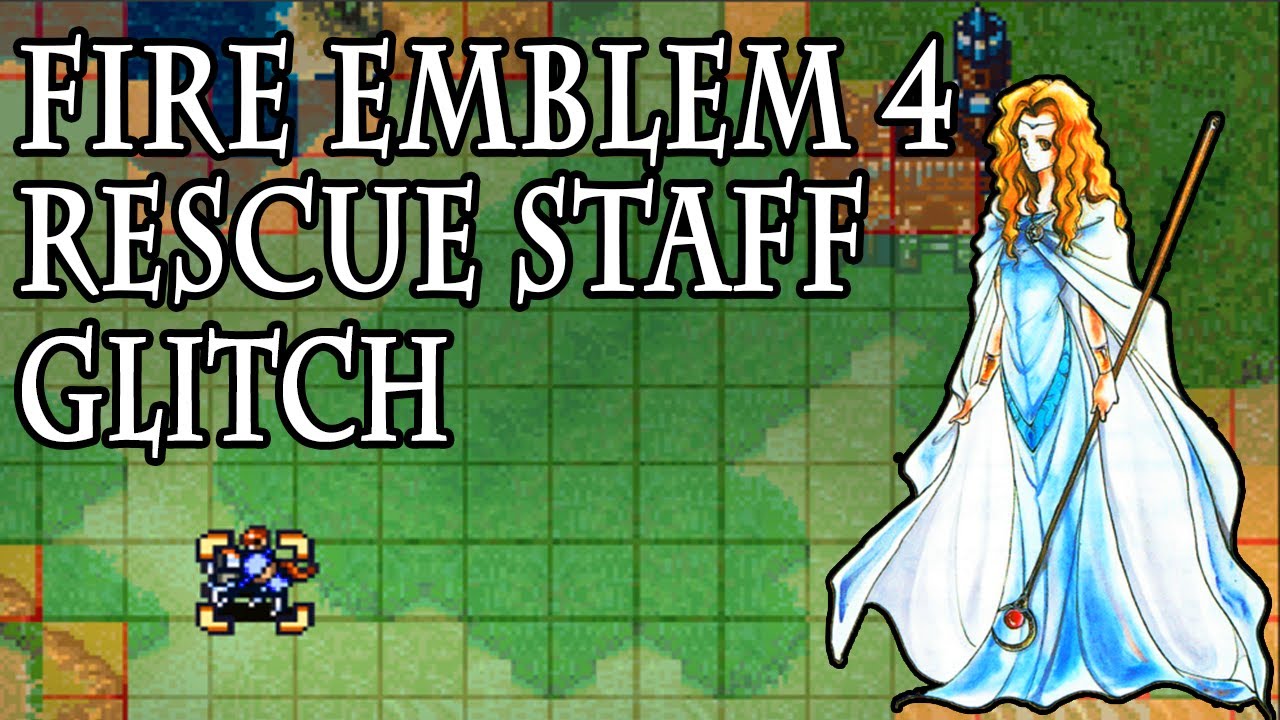 This video explains things nicely, and Serenes has it documented as well.

The main requirement, as the name implies, is the rescue staff. Under standard circumstances, it can be bought in the shop in Chapter 10, very late in the game. But you can get it much earlier with the correct pairing choices. If Azel and Aideen are paired at the start of Chapter 4, they can have a conversation to acquire the staff. However, there is no way to keep the staff into the second generation with this particular pairing.

If Aideen and Claude are paired, that’s a different story. Aideen receives the staff in Chapter 5 with this pairing, one chapter later. But crucially, Lana can inherit Rescue this way, as she will have minor Blagi blood and by extension, A-rank staves, enough to use it. This allows the entirety of the second generation to be effectively skipped and various events broken.

To activate it, guard the castle with whoever you want to give infinite turns to, then cast Rescue from inside the castle, then have the castle’s “guardian” exit the castle. Just keep using the Depart command over and over, and you’ll just keep moving. There are some strange positioning issues to be aware of, since the game still thinks you’re on a castle.

But this is easily the largest exploit I know of. Pair Aideen with Claude, and you can practically skip seven of the twelve chapters of FE4. Or to put it another way, Claude!Lana can let you skip the entirety of the second generation. Who needs infinite-range Warp when you can just have infinite move?

If one turns off the GBA during a tutorial-segment in FE7 and then loads the suspend later, the game will break in an epic(But sadly always the same) way. If one suspends from there and loads again, the game fixes itself.

FE9 JP, you can forge a slim lance down to 255 crit by underflowing it. Patched in the English release though. Not “broken,” but an actual manipulation of the game in a beneficial way kinda like the mine glitch.

Think I saw it in an FE9 speedrun a few years back.

It breaks that playthrough, at least

FE9 JP, you can forge a slim lance down to 255 crit by underflowing it. Patched in the English release though. Not “broken,” but an actual manipulation of the game in a beneficial way kinda like the mine glitch.

Think I saw it in an FE9 speedrun a few years back.

This works for any weapon that has a crit value at default (that can be forged). Pretty sure doing the same thing with a forged Thunder tome was also a common practice at one point.

The pierce glitch comes to mind as another pretty famous example.

The Devil Axe glitch is pretty noteworthy in addition to this as well, seeing as it locks the battle as the HP infinitely increases.

I believe you can cause at least visual glitches in FE6 by having Fae wield a firestone (which requires a thief to get berserked and steal it off a manakete… i think, it’s been a while).

There’s a very minor graphical glitch in FE7 that happens during battles. I have no idea what it is, but it seems like something gets misplaced directly in the middle of the battle screen. Mekkah’s Ironman Highlights has an entire section dedicated to investigating it. (From 3:36 to 5:00) 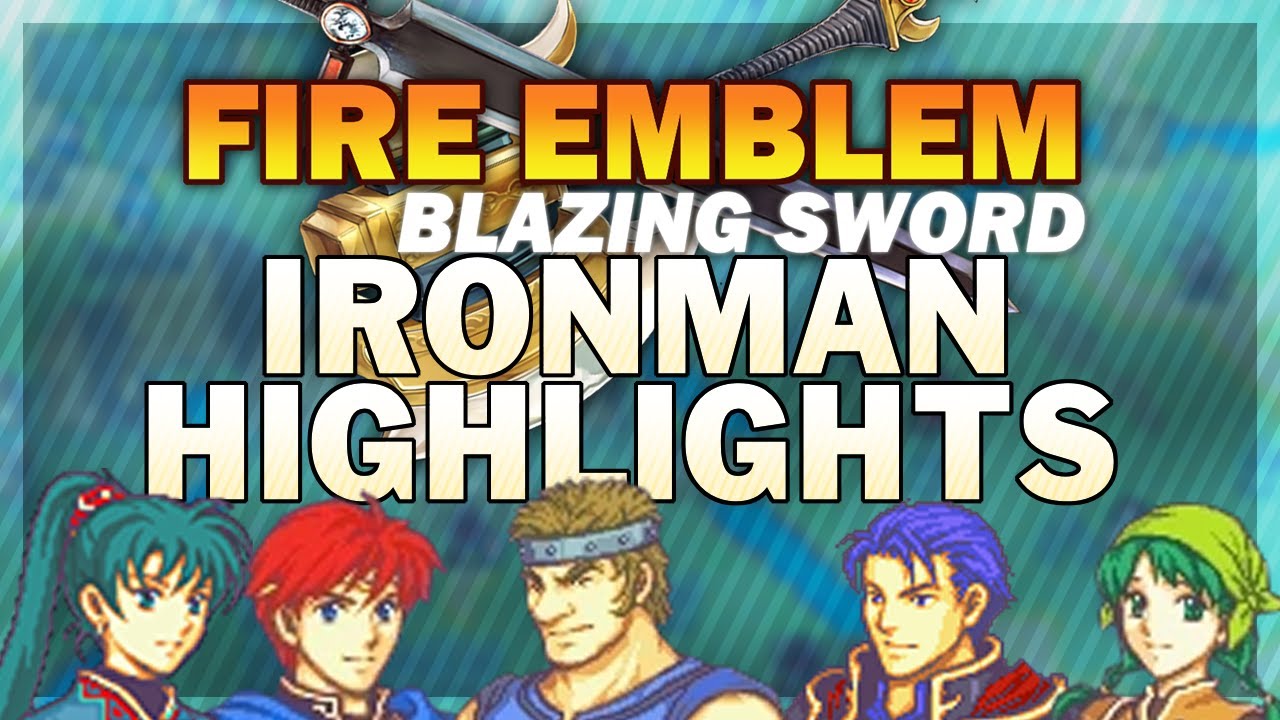 In theory, in any GBAFE game if you run into enemies in fog to make the ! graphic appear 20 times in 1 chapter it will make that graphic stop appearing and also break moving map sprites
In theory because doing this is ridiculously hard 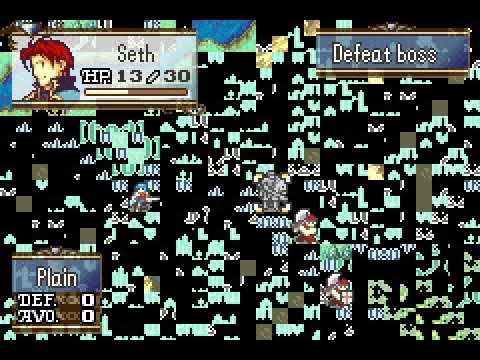 It works better with more weapons in your inventory (more text to fill up more VRAM).

@Merphin the hp ticks in the middle of the screen? I believe this always appears when staring a new game/file, this is almost always present if you start a new game of fe7

in fe8 if you clear the ephraim chapter where you’re supposed to get l’arachel and dozla before the two arrive then they don’t get added to your party, this is likely a glitch since if they do show up they will join you even if they’re green at the end of the chapter.

also Fae can get her stone taken by thieves, this is clearly unintentional.

interesting… What’s the cause of this? Is it memory related?

what the hell hahaha this is hilarious

Are you working on a video with the glitches? 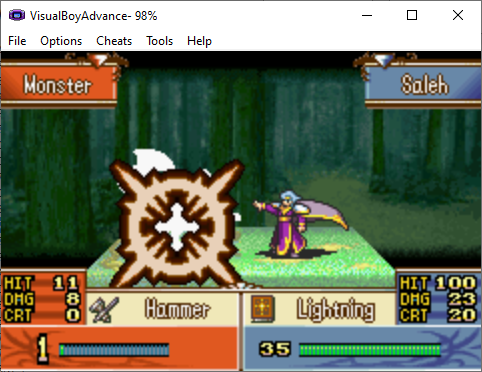 managed to replicate it pretty easily on emulator, the transparency is completely missing