The bare minimum I suggest is just the guy with the hatchet. Steal is a pretty viable option that can be more efficient than capture in certain occasions (especially in this one, since you can count only on 2 chonky boys).
During playtesting the average number of broken weapons was around 2-4, depending on the playstyle.
The weapon durability of irons and bronzes are a little bit of a mistery. Mainly because during the project phase I put on just a skeleton and then make adds and changes depending on the ideas I get and the feedback from fellow hackers.
The two solutions I have in mind in this moment are the further reduction of durability and making weapons harder to get by removing save points/increasing further the prices.
With time, the answer will be clear.

Yeah it’ll be a lot clearer as the hack is further along in dev. Looking forward to seeing it.

Good day. This week has been one of rest, feedback and enjoying the hack being played by so many people. 41 downloads is far more than I expected.
Today I’m back stronger than ever, expect a patch that fixes all the reported issues in the near future.
FEE3 deadlines are closer than ever and for this reason I decided to put the development of new chapters on hold, focusing instead on honing and updating the current build.
This includes: revision of the script, balance adjustments, but most importantly a custom title screen and stats menu (if I have the time I will try to venture into custom menus too).
With this, I will leave you a new mug I was working on recently.

I managed to beat chapter 1 after a few more attempts (it prob took me about 4-5 times overall, a few of them were killed early because I missed twice on the first or second turn which put me in a bad spot) and started chapter 2.

I have lost three times in a row. I appreciate the difficulty and recognize I am bad.

However, one of the biggest challenges I have (and that I’ve struggled to articulate to myself) is that it feels like the game becomes much easier if I choose not to engage in its core system, namely capture. Perhaps that sounds obvious, but it also feels bad given how novel capture is as a feature.

While I understand wanting to make capture a risk/reward, the amount of weapon uses being low in general, the low action economy (ie i don’t have enough units to do what the game demands of me turn by turn), and lack of reliable options for capture when I do want to pursue it, make the game feel a bit more challenging than it should.

I was thinking about some possible ideas and why it felt this way to me as I was playing, and I looked towards FE5 for inspiration. In Thracia, you get units that are notably stronger (Eyvel, Dagdar, Finn) and weapons designed to enable capturing more easily (Brave Lance, Brave Axe). Additionally, Thracia gives you units like Marty, who are great pack mules and add a ton of value just by having inventory space and the BLD to hold and drop units. You also have a huge cast to work with from the get go, making it easier to dedicate turns to higher risk plays, like reducing your hit for capture.

That said, I think the early part of Vestrian Tale would be a bit more reliable (and frankly, easier), if you added a tool like this early on to help enable capture. For me as a fan of capture, it feels bad when engaging with the system poses such a huge risk that I am better off avoiding it except in very specific situations. It makes capture feel more like a puzzle rather than a feature. If it were me, I’d probably add another playable unit like a Marty or Finn type that can help with capture and take drop, and/or a tool that makes capturing more reliable. I felt like if I chose to capture, I had to play very slowly.

I also get if you have a specific vision in mind and don’t want to compromise on that. The game strikes a unique tone and the feeling of desperation is strong on every turn. However, it also makes things a bit more punishing when they don’t go your way. There’s a reason many Kaga games with iffy hit rates give you a ton of units and low quality enemies, since it makes each interaction lower stakes. The game is high stakes right now, perhaps a little too much so - I feel like a single mistake means I have to reset. I don’t think you need to reduce enemy quality, though.

Perhaps I could stand to get good, but I figured I’d share my thoughts a bit more here as I play. I’m determined to beat the demo, but I bring this up because it feels like these things are missing and would enhance the experience without drastically reducing difficulty.

Hope I articulated my thoughts clearly. I’m probably coming across as a bit nitpicky and granular in my feedback, but it’s because I do enjoy the game and think there’s a lot of potential to make a smoother experience. Happy to share more in detail if you have any questions.

Thanks you for the in depth feedback. I have to admit that this is a point of contention regarding the game. I consider myself to be a little bit of a gamble man and I find the possibility of a chapter ending on a coin flip extremely thrilling. But at the same time, I would like the game to be enjoyed by most people. For now the solutions I am working to solve some of the issues are: implementing FE11 hit for most weapons, having Helena be able to access the convoy and add a new unit recruitable from the village in chapter 1. Sounds like a good compromise, considering I want to remove some check points.
Some more details would be nice, I am curious to know if some of you find the characters to be pleasing to hang around.

implementing FE11 hit for most weapons, having Helena be able to access the convoy and add a new unit recruitable from the village in chapter 1.

I’d say of these, increasing hit rates and a new recruitable would be best IMO. I think convoy access would take away a good element of capture because your inventory slots are more limited. In a capture game, I’m generally a fan of no on map convoy, but up to you.

None of the characters are grating at all writing wise. No issues there. I think you do a nice job of giving them their own voice and showcasing their personalities.

Unit wise they all feel good to use and distinct. Biggest issue is that Samir and Anatolij are the only consistent units available for capture, and Samir’s hit rates are super shaky even without capturing. I haven’t used Alva much but assuming w/ axes it isn’t much better.

Hello folks, development is proceding slowly but steadily. The title screen is complete and the works on a new unit are going pretty well. The status screen is also on its way to completion.
I would like to share this progress with you.

Hope you have a good day and see you for the next updates!

Good day my boys, today I would like to announce the release of the second patch of A Vestrian Tale. I am sorry it took so long, but life is a cruel mistress at times.

If we do not consider a couple of commisions I am waiting for, this should be the version used to the FEE3 showcase.

With that being said, I hope you will give this new patch a try. Have a good day. B)

Greeting folks. Today, I’ve finished making the mugs for all the characters in A Vestrian Tale.
I left a couple of spots just in case a playable unit or an NPC was needed, but I am pretty sure these will be all the relevant faces. The palettes for these character are also very close to completion.
Shoutout to Zoisite for allowing me to use the Phantom Soldier, Generic Pretzel for the Captain, Melia for Anna, Glaceo for his past and future work, Sterling for revising and improving the vast majority of the cast and Hagane for creating some of the designs. 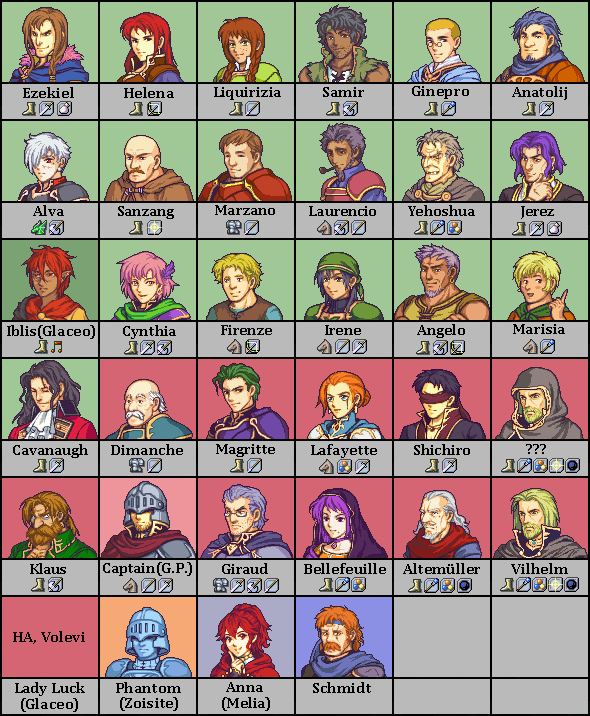 Thank you for the review! Fun fact, the bronze weapon issue has been tacked in the last few days! They now are more expensive and their might is the same as the one in awakening, making them not as good in every single occasion. A slight hit reduction also sounds like a plan! I guess 10/15 hit should be enough I guess.
Thanks again and hope you stay tuned, as I have some new content to show off in the near future.

Good day big boys! September has come and with it a more cozy and regular routine, perfect for hacking. Nontheless, August was home of few but fun to work on updates.
Mainly, I’ve created the maps for chapter 4 and 5.

For now my main goal is to make these maps playable.
Other than that, I made some playtest runs in order to recalibrate some weapons and characters. I am pretty satisfied of the shape the hack is taking; comparing it to the May release I can feel the improvements, even if I’m still relying to trial and error.

With that said, I hope y’all have a great day. Stay tuned for more A Vestrian Tale updates B)

Greetings peeps!
Playtesting for chapter 4 and 5 is coming to an end with pleasing and somehow funny results (chapter 5 was a particularly hard nut to crack).
In the meanwhile, I’ve created the map for chapter 6. I should start the unit placement this same day.

Other than that, the only “obstacle” to face is writing, but I have collected a lot of notes for these chapters.
Worst case scenario, I think I should be able to release the next patch in no more than 2 months.
With that being said, I hope y’all have a good day!

Greatings folks!
Scrolling back some old chats, I noticed that the first instances of me working on AVT date back to the 9th of October 2020. This means that some days ago the hack past its first anniversary.
As a guy who’s really fond of symbolic dates, I would like to leave you some updates and old stuff to celebrate.

With that being said, see you soon for some more AVT updates! B)

Ngl that second sketch is

Today, after some playtesting, Rivian hit me with this pearl of wisdom: 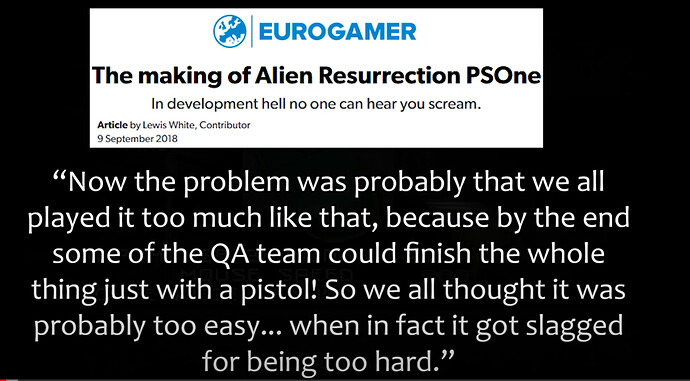 He was definitely speaking the truth. I have a group of epic fellow hackers to which I turn to when in need of help. Thing is, after more than 9 months of playtesting, they have become very accostumate to all the quirks I throw at them and in general to the way I structure the chapters.
For this reason, before proceeding to other hacking sections like text insertion or cutscene eventing, I would like to have some new testers play and experiment with the chapters, expecially the newer ones.
If you are interested, please contact me on Discord (Roze #0858).