Adding more statuses is a lot less trivial than modifying the ones that are already there. Though I could be wrong.

Just opening up the shoulders would be a huge difference, tbh.

Actually maybe if you added extra tiles to the end and edited the TSA?

but even if it worked you’d have to edit every portrait in the game to fit the new hackbox and then insert your mugs manually. If you’ve never tried to insert a portrait without FEditor let’s just say it’s awful and it made me give up on hacking for years
Unless you loaded the extra tiles as separate images? but that’s also super complicated gah

E: scratch that, there’s only room for 2x4 tiles, forgot about blinking and mouth frames 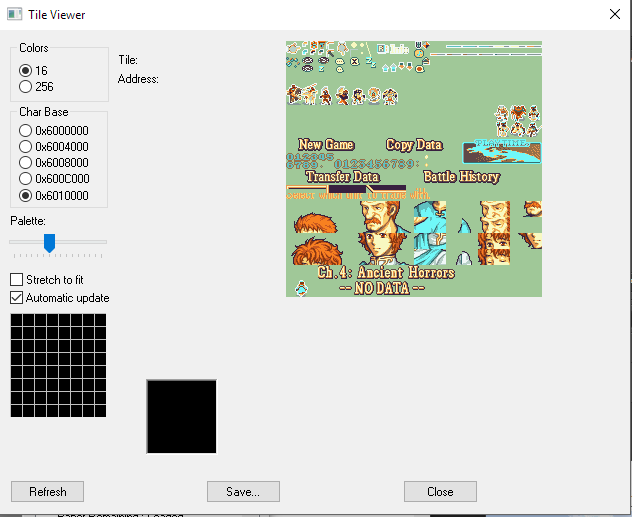 What if you got rid of the mouth tile that only shows up in the status screen and replaced it with other graphics? 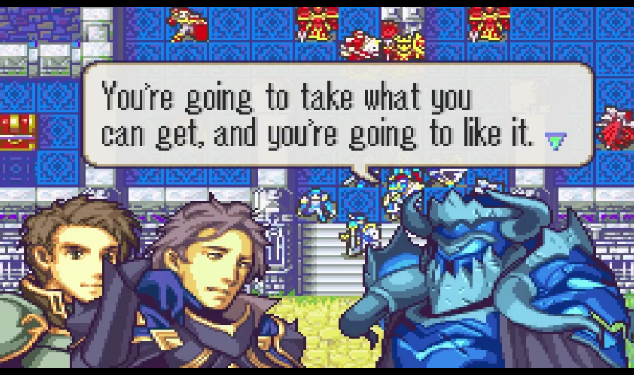 wait… is that just two mugs next to each other? That’s fucking genius

lol yeah that’s what I did. It’s really awkward to implement though and only really works during dialogue scenes. The unit itself uses a class card that you can see when the stat screen is open, which is also why it lacks a chibi. I’m sure there’s a way around that but I can’t be assed to do so.

I remember when I tried something like that they all shared the same palette. If I remember correctly, the minimug padges are also uncompressed. I might be mistaken, it’s been a long time since I’ve looked into it.

What if you brought the mug down so that it fits within the hackbox and inserted it over Nils’ or Nino’s mug slot so that in the stat screen it gets pushed up? And then just call a separate mug for dialogue scenes. I’m sure it wouldn’t be hard to locate the byte responsible for pushing up mugs.

I converted this zero-move display patch into EA event format (for FE8):
Here it is.

Dunno if anyone’s made this conversion before but I couldn’t find any.

It’s part of SkillSystem but iirc it uses the statgetters so you couldn’t use it standalone.

Is it normal that Oneil in the prologue is still shown as a moving enemy even before the AI change?

Cool, glad my efforts were not totally put to waste.

As for O’Neill, that’s normal. His AI settings don’t include 0x20 in AI4 so he is not considered stationary for the purposes of displaying MOV.

Since enemies that can be recruited seem to retain their AI, and if the recruitable enemy has AI4 as 0x20, this results in player units that can’t move. Is there any other workaround for this besides not setting 0x20 in AI4? Afaik with FEB you can’t change AI4.

One can change AI4 in the recruitment event tho?

Tequila has a patch that makes AI3 and AI4 changeable with CHAI but I don’t think FEBuilder has it.

I’m able to do it in Builder using the “Set Unit Status” patch to directly change AI3 and AI4.

Say I have a boss who starts off stationary, and I want his move to be nullified. I’ll inital set his AI
parameters as shown below.

If I view Vincent on the map, it will show him having no move, and he won’t attacks unless a unit
is adjacent.

But, after several turns, I want Vincent to begin pursuing the player. I make the following happen in
an event:

The first two commands are from the “Change unit status” patch in Builder. As I understand it, these allow you to directly change a unit’s status in RAM through an event. Here, 0x40 and 0x41 are the
relevant statuses, as they are AI3 and AI4. I set them to change to 0x4 and 0x0, respectively,
as this turns off the “Boss AI” for AI3 and AI4.

Following that, I use a change AI command to change Vincent’s AI1 and AI2 to what is desired,
pretty standard.

Now, Vincent’s AI is changed in behavior, AND he now displays his move, where he previously
didn’t. Hope this helps!

Now, Vincent’s AI is changed in behavior, AND he now displays his move, where he previously
didn’t. Hope this helps!

That did the trick, thanks for your help!