When are growths considered good or bad?

I’ve been messing around with the growth rates in my work, and can’t figure out what growth rates are good or bad. I never really paid much attention to that stuff in the games.

If anyone could give me averages, i.e. 30 is average, 20 is bad, etc, then I would be very grateful.

First of all I want to ask people to please make your thread titles searchable, people should know what the question is going to be before they click on the thread. Once a question is solved, it can be archived as documentation so having good titles is important.
I’ll edit the title but feel free to edit it to something else if you come up with a better one.

As for your question: there is no answer. It completely depends on the balance of your hack: the stats of your units, the stats of the enemy, how much enemy stats go up… Essentially, you need to plan it and playtest it until you are happy with it.

If you want people to be able to help you with deciding growth rates you are going to have to share the character stats and (at least) some examples of enemy units in different parts of the hack.

I guess I should expound more.

When I ask what stats are good, bad, average, etc, I am asking about the base game. Like when you look at a character and think “this one’s not worth it”, what is the baseline for that. Giving an example of my current state won’t help since I don’t know if what I’ve changed is appropriate/balanced or not.

It depends on the game.

If you need more specifics or a better idea for a particular game you should check out the data at https://serenesforest.net/. I don’t know about their forums but the main sight has very good records on game data and you’ll be able to find growths for just about every Fire emblem game.

I hope this helps give you some direction.

This is exactly what I was trying to find. Thank you so much. I’d put most of the stats in the 20-35 range, so I guess I need to make some changes.

I’d like to add that it also depends on the base stats of the character. FE7!Marcus’ Spd growth of 25% is good enough for letting him double most of the game consistently off his base Spd of 11. On the other hand Bartre in the same game has a base Spd of 3 and his 40% growth cannot really salvage it.

I think that normal hp standards shd be about 60 to 80
Str/mag shd be about 30 to 50? To dish out more damage (hell, I hate fe6 enemy def so much)
Spd skill lck shd be about 35 to 55
Def and res shd be about 20 to 40
But that probaly varies with classes (40 on spd is pretty good on a general, 45 str on a myrm is already good) and bases (like prepromotes might have a lot of bases but much less growth on it)
And the standard varies with the game as well (like if the stat caps are inflated or theres lv30)
And enemy difficulties (like how much they scales with levels and are most of the bosses evasive/deals nearly one shot damage/very high def and res or not)

I typically like higher growths to feel less bad. So for my hacks prepromote max stat is 25 instead of 20, and promoted can go upto 40 instead of 30. Classes that heavily favor one stat usually have it at a max of 40, while mediocre stats are 34-36 and like the worst of the worst is 28-30. So only a slight improvement but you shouldn’t gain stats in these anyways. Oh also HP is 80 prepromote and 120 promoted. Most (anyone) shouldn’t reach these, but High HP is fun to see anyways.

My MC has HP:90 Str:70 Skl:60 Spd: 65 Luk:55 Def:45 Res: 45 Mag: 45 sword lord with magic prf.
So his HP will almost always go up and his Str/Skl/Spd will typically levels as well. He’s my strongest unit in game and his stat reflects as such. Also when I test run sometimes I think “jesus christ he’s a monster why does he do so much?” And I forget he’s the MC and the ONLY one who can do this. 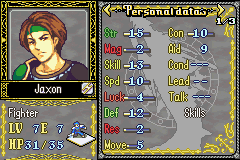 And that’s him with a base speed of 6 at lv1. So he got good levels but still can’t double some and is keeping up. Even so he can double some units without trouble and it shocks me when he’s smacking someone for 20damage.

My “jagen” (Oifey) HP:135 Str:50 Skl:65 Spd:45 Luk:35 Def:65 Res:45 Mag:35
So he gets decent but not amazing growths to still keep up with the team if you so choose to. He starts at lv15 in a hack where max is 40 and levels carry over through promotion. So by the time he can start getting EXP he’s behind everyone but still solid. Also getting his PRF lance which grants Aptitude so he actually will turn out really well if it’s used smart. But that will take a while of holding onto his weapon not using it.

Finally guess what class this person is - HP:65 Str:5 Skl:45 Spd:80 Luk:70 Def:30 Res:70 Mag:50
If you guessed something something probably a mage, your right. She’s a cleric with access to light magic prepromote. So she’s quite minmaxed with Very High Spd/Luk/Res to take on mages, with a chance to level magic as to not outshine your other ACTUAL mages. With low defenses and skill, but her light magic makes up for it mostly, she’ll still have a tougher time hitting people later in the game which is perfect because she isn’t built for combat, but you can use her for it without too much trouble. Even so I still gave her HP a 65% to grow, because later with enemies walking around with 25-30str and weapons damage will spike really hard. So she needs it to survive one hit, maybe.

So basically it depends on what you want from your games: My growths for normal units are 400-420, while my MC and “jagen” and other OP units is 475. But that’s to compensate for the 25/40 stat caps I have planned. If I was going normally 20/30 I’d drop these by like 20 across the board.

If you want to check high growth rate games look at Awakening, Radiant Dawn, Some of FE Fates. Lower growth rates are like FE6, Echoes, FE12 that stuff.