What do FE fans not want in the next game?

There are a ton of things we love in Fire Emblem that we want to see but there’s also a ton things that we don’t want to see like ambush spawns as an example. Here’s what me and some other FEtubers don’t want in the next game. 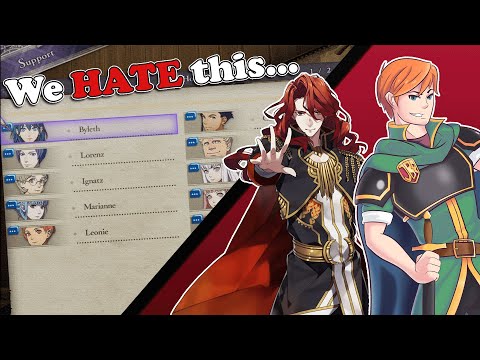 I also would love to hear what you guys don’t want in the next game.

Well if you’re really looking for other people’s voices in the matter, I know it’s been said before by other people but as much as I love the possibilities that Three Houses class system provides, it’s alot fun to me when every character has a base class that relates to them as a character, I mean I know Three Houses goes out of it’s way to be like “oh this character would do well in this class line, wink wink nudge nudge” but it’s really just not the same as having a set class that helps to define the character more, and I mean one or two reclass options are fine, especially if it adds to the character more or is a nod to their background, but don’t overboard with it, you know?

Every fe game so far has had units, and you know what? It’s grown stale.

Pursuit based on SPD.

One thing I think everyone’s sick of is games having graphics and music. The next FE should be interactive fiction or the series is truly dead.

I don’t want class changing, or if so make it like Fates and only change into another specific class and that’s it. No Heart Seals or any of that bs.

No ambush spawns. No “multiple routes”, FE7 did it ok by unlocking more of the story through each run, lyn -> eliwood -> hector -> hector hardmode. But that’s still quite alot without enough change.

A rank as max for weapons. S is better. Also mandatory weapon caps. like how some classes in fates can’t go above a B or whatever.

Battalions / Gambits. Too gimmicky, not enough balance, and it changes stats too which is odd.

I can definitely agree on that one, again I know it’s beating a dead horse, but Linhardt is…alright and Jeritza and Yuri patch it up a bit with the DLC, but seriously Three Houses? Having only one real gay option for guys in the base game while gals get five? Don’t get me started on Awakening and Fates…basically some more…variety, legitimate variety, would be highly appreciated.

Yeah I feel as though three houses has too much customization at least for a more traditional FE game. I liked three houses for what it was but for example fe6 would be super boring if I could make everyone a wyvern lord.

Max difficulties that rely on stat bloat and ambush spawns.

Avatars (especially in case of a remake) and unnecessary child units like Awakening or especially Fates.

Spells per day magic mechanics. No, you do NOT get to warp skip every chapter.

i don’t think child units were unnecessary due to the story of awakening. they were completely unnecessary in fates

you know what I don’t want in the next FE game?
a next FE game.
three houses brought too many casuals in, they should burn down the series while they still can

No please, we all were casuals once, and if it wasnt for a good new game on the main series, i wouldn’t be here.
And, i mean, i really had fun with Treehouses.

Here here, i’d like to think we all have enough sense to remember we all sucked at the games we love at one point or another.

Dude, joke or not that level of elitism is very close to Siege levels of toxic.

While 3H had a cool sandbox concept, it ironically made units feel more stale. I’d ask to tone it down significantly, maybe have it more like how Awakening did it where every unit had 3 class sets.

I personally don’t mind an avatar (then again, the first FE game I finished was awakening), but I think a whole lot less people would be complaining if it were in a second wave kinda thing, sort of like how NG+ operates in many games.

I’d like a smaller focus on stats. The recent games except SoV were big on having stats being large. 3h in particular has obscenely high caps, even though most characters won’t hit theirs. With things like skills, Battalions, and combat arts, I feel more can be done to make the game have more strategy than just “big numbers”.