So, I aim to fix many issues with Fates’s Writing in my own way and the Unit/Gameplay loop for BR and REV with a few unique additions. Here’s what’s Planned for Story:

Prologue is Untouched, while chapter 1/2 is mostly similar to vanilla with a few lines being tweaked or altered. Although the Reason why you fight Kaze and Rinkah is that they were caught in the Royal Treasury.

Chapter 3 is where Garon sends Corrin to investigate a disappearance of soldiers stationed at the Bottomless Canyon (This is where the mysterious Army makes its debut instead of chapter 5), after the battle on of the few left standing drags Gunter into the Bottomless canyon and a few being to leave towards Hoshido prompting Corrin to follow in Pursuit.

When the Avatar winds up losing them due to them just vanishing, they wind up in Mozu’s Village under attack by the Faceless which leaves Corrin and Felicia/Jakob to try to lead the villagers to safety. Eventually Hinoka or Takumi (And their Retainers) show up as Green Units to help rescue the Villagers. When The fighting is done Hinoka/Takumi and Corrin meet each other which Corrin learns about the whole Being taken from Hoshido by Nohr thing as usual.

After that, I have vague ideas, likely something involving the Valley Settlement and more Dialogue changes to reflect the new idea and hint at some later stuff.

For Gameplay stuff, there will be more Dark Tomes, a new weapon type, more Beast and Dragonstones, some new classes and More Supports, and Reworking how some chapters actually work. (This part is more adept to change.)

Goodluck with the project Bro!!

I could lie my ideas how to rewrite Fates here, then:

For example the prologue chapter could be recontextualised in this way:
The Hoshians are not captured but come as an official delegation due to Corrin finally got of age. They want to take him home. Corrin is informed of his heritage but also told that “some things are more important than blood”. The first battle may be more of a demostration and a mock battle.

Your point 1 and 8, sadly I have other plans, tbh.
2. REV is getting a rework
3. Well you’ll have have to fight some of the kids not tied to the Route you are playing on
4/5. Garon is being Rewritten for sure, especially on CQ (Might even become a Playable character.)
6. How come?
7. Plan on doing that myself fleshing out the lore of fates, either in Story or via Supports.

You can do whatever you want, I just wanted to put throw somehwere what I would do if I did such a thing. Because Fate’s story is super terrible.

And permanenet night is just plainy stupid. I would like for the Nohrians to be presented as a viable alternative to the Hoshidans and not just plainly the bad guys.

And I contemplated during Vala into just a mountain kingdom. Just yeet all the anime nonsense, it doesn’t work in such a video game.

I’m focusing, btw, on the gameplay first, that way the story will go much smoother.

Also for now at least the Story will only recieve minor rewrites so the beat of the story will remain mostly the same.

TBH the only thing you would like to change in fates is the story. The gameplay is already very good.

Well, unless we’re talking about Rev.

The story of all Fates are all quite good actually, not like this series is a relied on story series. The things is all paths have quite weird different, enemy characters of Conquest is very different with other path. And by saying good I not really praised it, some twists just really

especially in Revelation.
Meanwhile in all paths some parts is just there happened for the sake of causing drama(not count backstory) but well its to expect since its FE, it just it seem more of an unfinished product than other. My most complaint is ofc about Lilith and maybe Izana lol. And tbh I always found of Nohr casts more than most Hoshido casts in all paths, and worst Birthright casts just too weird for me in Conquest other then Suzukaze, Hinoka and Sakura(And Scarlet because duh), so even tho its the most unique path that time(now there 3 House, eh) it have the worst taste. Haiz that why I want to pretend most things got cleanup and have sequel with like most characters in 1 side.
Btw I ship Camilla and Suzukaze, my wife is Flora.

Yeah, I’m allowing Scarlet and Izana to live in REV, and Flora in BR, tbh, since thier deaths serve no purpose other than shock value.

The issue with Fates’ story is… it was written by a cartoon writer. And when you squint your eyes you’ll notice it would make much much much more sense in a serialized format.
The gang goes X, does Y, learns a lesson, end of the episode.
The issue is games like FE don’t work like that… and that’s where Fates’ story fails.

Right, I’ll actually change chapters and story bit to flow more smoothly, like Corrin and his Nohrian Siblings are headed to Izumo to meet with an agent there but along the way Kotoro lures them into a trap.

Or that The Hoshidans send a force to capture the Nohrians in Izumo.

Here’s a little teaser for you guys: 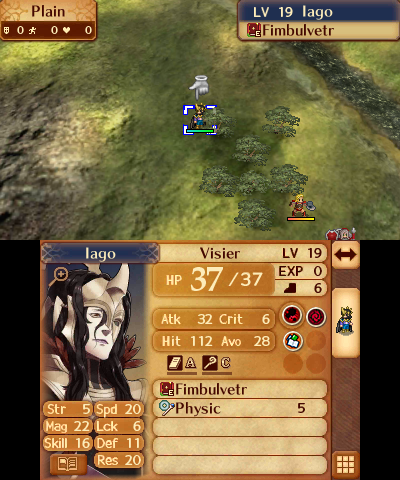 I’m assuming that Iago is only playable temporarily like Orson in Sacred Stones right?

Actually no. Full-fledged Playable, since Chapter 26 is Vs Mikoto, now.
And chapter 16/17 of Rev will be different.

wait why are arthur and effie red units

It’s the Prologue, I use it for a testing ground for new characters/classes.

Does that mean that both Hans and Zola are also playable units?