Hello there! This is the typical thread everyone (especially spriters) makes to show off their stuff.
Here you’ll see the sprites and musical stuff I worked or I’m still working on.
The portraits aren’t free to use but the icons are.

MUSIC:
Some of these videos are a little old and weren’t made to be posted here so don’t be surprised to see “Follow Me!” as the in-game title.

oh wow I like your spriting style despite it not being traditional, very cool
kid goku is the best goku

I gotta agree with Skitty, your style is quite interesting and unique, and I’m all for it

The tomes are amazing, definitely my favorite part

I really like the portraits’ color choices and shading, but the parts not spliced could use some more work. Music is great overall.

Love me some Pokémon Mystery Dungeon OST and those icons are looking crisp.

I made a new version of Mt. Thunder from the first PMD. I’m happy with how it turned out, I think I won’t touch this song again in a long time.

EDIT: nevermind, I’ll probably make a 3.0 version of this song soon. That will be the last one for sure.

Didn’t expect to make the new version today lol. Anyway, here is it:

I’ll avoid posting multiple versions of the same song in the future (unless there’s a significant amount of time between each other).

Yes, there’s some cracks here and there. That’s because this recording was made on a rom with higher sample rate than the usual (the higher the sample rate, the more common the cracks become).

this one turned out pretty well actually.

the higher the sample rate, the more common the cracks become

That’s… not correct. It’s cracking because it’s too loud, dude.

My icons use a slightly modified version of the vanilla one by the way.

Can we get uhh a tour guide of what some of these categories mean? I’m not clear on what Swords2 is supposed to be, and such and such.

Here’s the last update of the icon sheet.
Do whatever you want with it. The only stuff that it’s not free to use are the custom regalia icons I made and the hiraeth stuff. Yeah, now you don’t have to ask me to use it.

EDIT: the sword icon under the black gem in misc isnt free to use either btw

I finally made my first handmade portrait.

And the character I chose to make is none other than Ced, in his thracia design.
It took a lot of time to complete it, but I think it was worth it. I’m probably going to be making portraits for other non-fegba characters, until I’m fast and good enough to make my own designs without much trouble.
Anyway, I hope you like it.

I decided to update the Ced portrait I made 10 days ago.

Now I can truly say that it’s finished.

I updated the icon sheet again, now it has some golden sun psynergy icons, more ffta icons, a new regalia for hiraeth (along a minor staff), the swordslayer, new iron, steel and silver lance icons, some edits in various icons, and most importantly. Gengar!
Oh, also I remade almost all (if not all) the regular fegba staves.

Also the Sword2 section was scrapped and I put the RandoM section instead. The icons there can be any of the physical weapons, and they’re always there because another weapon is occupying an already taken space.

EDIT: Minor update in some icons. Rewarp staff added, along Thracia’s warp staff.
Originally I was going to add more Hiraeth Regalia icons, but Zoisite/Seneca basically told me to make them later (I actually have guidelines on how to make the legendary axe but I don’t know how the hell I’m supposed to make that icon. I have an idea but Ehhhg).
Oh, also, gengar now is on the sheet’s title. 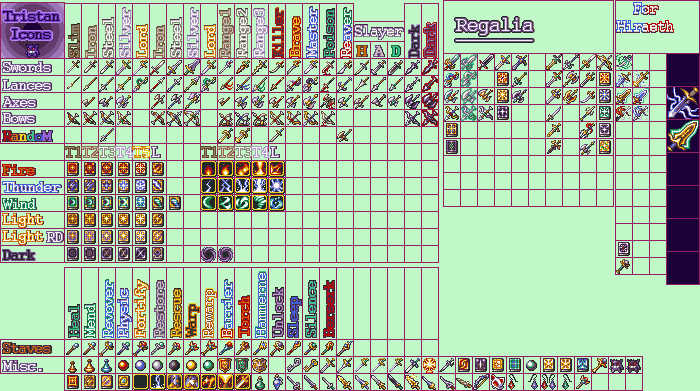 Ok but where is my clefable huh