Hello! This is my first post here. I just thought I’d share the complete FE1 hack that I’ve been working on for the last couple months. I posted about the project on Serenes Forest and RHDN and I’m getting tired of rewording the same information so I’m just gonna paste what I wrote on Serenes.

Why make a Fire Emblem hack in FEBuilderGBA when you can build it on the NES instead?

Time For Tom is apparently the world’s first complete Fire Emblem: Shadow Dragons and the Blade of Light hack! This is a 18-chapter new story featuring a great number of improvements to bring the oldest backwards FE game up-to-date. A full list of differences from the original can be found in the readme, but noteworthy improvements include:

The Akaneian archer Thomas, and his buddy Jake, find a forgotten Time Orb which they plan to use to prevent the War of Darkness and stop Hardin from receiving the Dark Orb. Unfortunately, they have no idea how to use it! So, they travel through some other games in the series on the way… How will they right the wrongs of history?

Play as some of the most popular characters in the Fire Emblem series, like Glade, Roger, Alba, Morzas, Samto, Claude, and more!

I was going to include a download link and pictures, but I don’t seem to have unlocked that ability yet. You can basically just Google “fire emblem time for tom hack” and the ROMHacking page should come right up.

Sounds interesting! FE1 hacking is not very developed, and it’s always cool to see this kind of projects.

I was going to include a download link and pictures, but I don’t seem to have unlocked that ability yet. You can basically just Google “fire emblem time for tom hack” and the ROMHacking page should come right up.

You need to have a certain number of posts/activity to get a high enough trust level to post links and images. Don’t think it takes too long, should be able to come back and edit after engaging w/ the site a bit.

Oh, I played this when you posted on Serenes! I have an issue to report, but I didn’t feel like getting into my Serenes account. I wasn’t able to get past the Thracia 776 chapter with the Glade squad, though. The ending dialogue glitched (screen got covered in garbage while playing text sfx) out and button mashing/fast forwarding didn’t do anything.

Otherwise, I enjoyed the hack so far!

You may want to re-download the patch. I’ve fixed many issues recently, and recently I did I run where all of the chapter outros worked.

I’ll work on adding screenshots and a link to the main post when I get the chance.

Hey i saw this first at romhacking .net, i will add it to my list of things to play, i am very excited.

Yeah! It works now! I will go back to playing it soon

This game has Samto? Holy shit I gotta try it now.

So, uhhh, this guy 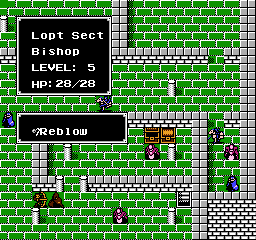 will attack patty on the enemy phase and it looks like this: 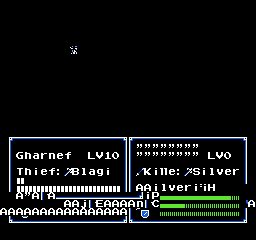 though he doesn’t seem to be going after Finn if I have her run out of the room and he blocks the door
If patty is unarmed, she instantly dies, if she has a weapon she can use (having Finn giver her a sword before ending turn, otherwise she has an unusable Blagi Sword she got from the chest) the game hangs on the glitched battle screen

I was about to reply about how I have no idea why healers are attacking and then it hit me… healers in FE1 can’t use Reblows, only Lives, Relives, and Reserves. I swapped out items for all the enemies in the game that use Reblow Staves, and then I added some more balacing on top of it. Bishops shouldn’t be so prone to doubling anymore, lesser classes don’t give more EXP than normal either. I’ll edit this post when the new patch is approved.

Also, the Blagi Sword comes from Thracia and therefore can only be used by Leaf, Nana, Fergus, and Delmud. If you happen to run into any of those units, then you know who to give it too.

Oh, yeah, I figured! I only said “unusable” because it was the only weapon in her inventory while being unarmed and wasn’t sure if that specific state would have an effect on anything

The update got approved. No more healers attacking with staves! This isn’t Radiant Dawn.

damn, this sounds cool! may i ask, what tools did you use to mod fe1?

My own homemade tool. I wrote a program in Python to extract all the data to text files and re-insert it.That, and the hex editor in FCEUX for all the other work.

Will the full version of the Basilisk program ever be released?

I’m thinking no, as you have to understand and wade through my mess of code to get it to do what you want.