This is a bug I’ve experienced in FE7CM, and in Min-Max Emblem. I already know how it works, but I’m posting this topic so others know. Also, so I don’t have to look up my posts on the FEU Discord constantly to reference it.

Simply put, if you add classes past the final class in FE8 (0x81?), the game has several bugs, but the biggest and worst one involves characters gaining tons of RES. This applies to ally and enemy units.

So the stats randomly bug out, right? Wrong. It’s entirely based on deployment order, for allies and enemies. 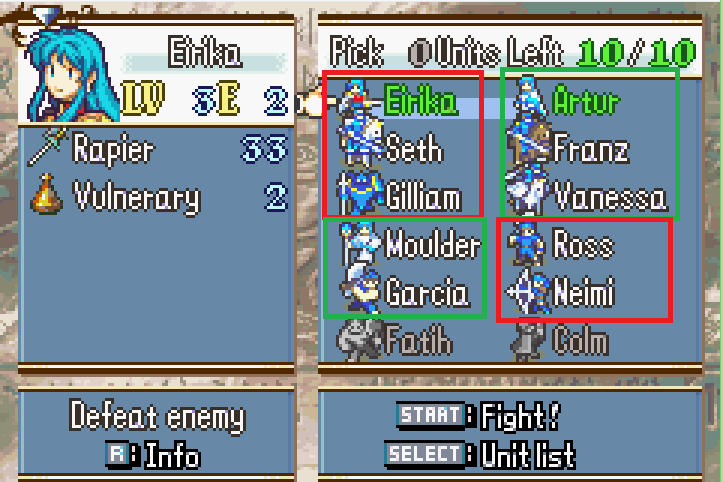 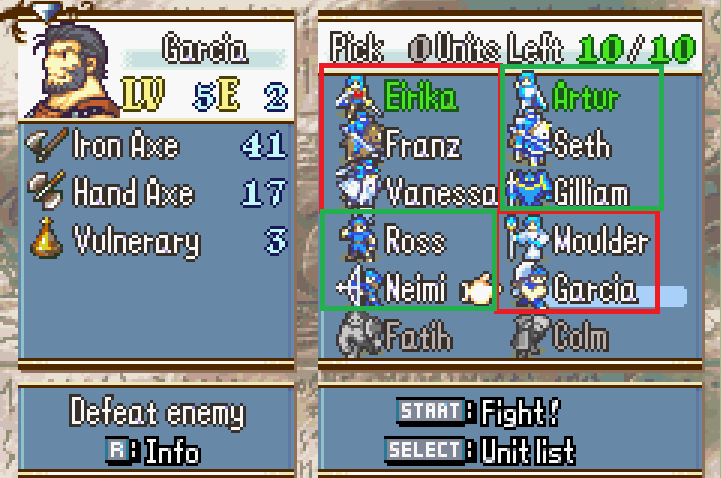 That’s all we know. Kirb’s current system for expanding the class array does not solve the problem. I believe he’s working on a fix still.

@AlfredKamon mentioned @Brendor managed to expand the class array and apply a new save system for Midnight Sun several years back and no bugs were reported. Maybe he knows something?

Anyway, this is the biggest bug. Don’t expand your class array until it’s fixed. That is all.

This bug will haunt me to my grave

I’ve expanded the class table with no bugs, but there are 2 things I am doing that may be preventing this:

The prep screen, huh? I’m 99% sure the bug occurs as early as the prologue and chapter 1 of FE8 before the prep screens appear, but I can check.

Also, this bug happened in FE7CM. I did not have FEB back then, only nightmare and FEditor and EA.

@AlfredKamon mentioned @Brendor managed to expand the class array and apply a new save system for Midnight Sun several years back and no bugs were reported. Maybe he knows something?

Yeah I can confirm this, even the v.1.5 build of MS released back in 2015 used classes past 0x81 and no bugs were ever reported.
@Brendor probably knows more

Seems to me like the 4th bit is being incorrectly set, so your characters’ res is going up by exactly 16. The expansion method I used in MS is MS exclusive because it’s tied to the Str/Mag split.

So all we have to do is make a Str/Mag split and incorporate them together. EZ-fix Chop chop, Kirb

thanks for making the topic for this, really want to expand the class list

Kirb sent me this new class expansion. I’m extremely busy right now. Someone wanna test it and see if it works? He changed something with the suspend system.

@Klokinator @Kirb
Unfortunately after going through the trouble to expand the class table, I can say that kirb’s fix just seems to cause all the player units to not reload at all on suspend

I had a general patch that expanded the caps but I never finished it though it’s mostly complete. I suppose if this doesn’t get resolved and there’s a demand for it I can finish it and publish it. Though nows not ideal with the end of the semester. I’ll see.

Edito: Needed an extra fix since I was using skill system. Seems to work okay?

Wait, it works? And what do you mean an extra fix?

@Pikmin1211 I seem to be having a similar issue to what you were experiencing. I installed the patch from the link @Klokinator provided onto a modded ROM that already had the skill system installed. It seems to work fine at first: I set Seth to be a custom unit 0x83 and his class stays the same after saving and loading. However, after I clear the stage with Ross and Garcia the save file is buggered once I save again. By buggered I mean my unit list is empty. Is this what you were encountering? If so, how did you get around it? Thanks much for the assistance.

Assuming you’re using buildfiles, you’ll have to switch out the save data edit from skill system with the one in kirb’s class expansion fix. If you’re not, I have no idea how you could fix it.