One day I decided to try to make a Ridley from Metroid sprite in FE, and right now, it’s all only in parts. The sprite is largely based off the standing animation in Ultimate, and the color is based off of his original Metroid color 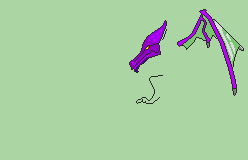 I know how odd and out proportion a lot of his made parts are (the leg I decided leave undone for the moment because of proportions with the future arms), and the coloring is left mediocre right now, but I will finish it up along with other things as time goes. Also his size is probably an issue, and tbf, is rather out of proportion to his SSBU form (although his size never really was consistent). Anyway, here is the current form of the sprite. I am only a complete amateur when it comes to spriting, and even worse when it comes to animation, but I was actually planning the idea for a tail, claw, bite, and fireball animation for him, but it’s all in the wordworks right now. Anyway, I’ll give y’all an update later.

Size shouldn’t be an issue considering big animations like Idunn, the Fire Dragon and the Demon King are possible. I look forward to seeing more of this.

Those animations have special code to them and use backgrounds as part of the character, it is possible to make big animations but it’s unlikely to work by just throwing it into the regular battle animation tools.

While you are correct, Marlon0024 was able to recreate those animations without the special backgrounds, meaning it is possible to create big animations like that.

Less of a sprite update, and more of acknowledgement, with those so called backgrounds, I thought of how I could make some sort of cool thing, like Plasma Scream or his entrance animation in SSBU, but that might be too much for me lol