Reversing all the Magic Triangle!?

I want to know how much it represents to the fandom to play a hack where the Magic Triangle it’s complete reversed
Dark > Light > Anima > Dark
Do you like the idea ?
It would be so crazy to do ?
Cause I’m doing that with certain project very justified in my opinion.
I think if we justified ( in-game) the changes we made and give some things another meaning would be really cool
Wanna know your opinion guys :3

That seems fine. The Magic Triangle was pretty different in Jugdral compared to the GBA/Tellius games anyway. Dark and Light magic both had advantage over Anima, but were otherwise neutral towards each other. As long as it’s explained well enough, I don’t think it would be too hard to adjust to.

Finally a reply xD
Thanks Merpin
Well the thing it’s that I’m making a YGO project ( obviously using FE as base )
So in YGO we have three protagonists
Yugi
Jonouchi/ Joey
And
Kaiba
They as cards are
Black/ Dark Magician ( Dark ) 2500 Ark
Flame Swordsman ( Fire ) 1800 Atk
Blue Eyes White DRAGON ( Light ) 3000 Atk
But yugi always beat Kaiba and Kaiba always beat Jono, and it’s actually a lore duel that seems to be won by Jojo against Yugi

Kaiba use his strongly power to destroy their enemies

And Jono uses their lowest monsters with effects based on luck , and he has a ridiculous luck

So I made my custom magics based not only on cards , they also has a lore behind them related with many facts

One of them it’s the fact I just explained

Is there any particular logic behind this? To people who don’t know the GBA magic triangle, they won’t much know here either; to people who do know the default triangle, this will throw off their memory and intuition. Do you have any particular reasoning behind the reversed triangle, as a lore explanation or as a gameplay mechanic? Because if not, I’d highly advise against flipping around the magic triangle.

Well yes it actually was a bit explained in my reply.
Look my project it’s a ygo fangame with the mechanics of FE so that’s why I’m using FEBuilder cause it’s easier to me to make what I have in mind.
The public I want to play my project are both
Ygo and fe fandoms cause i think it is a whole revolutionary project.
The lore behind the reversed weapons triangle it’s part of what I already said.
And also some extra lore relation

In Wizards and Magic
Light magic it’s based on the God power
Called in YGO as the Solemn one
Only mention in some counter trap cards that negates almost everything
So to translate those cards into magics we have super powerful magics that hasn’t any side effect but cannot been countered
So if light represents god and Kaiba it will wins against Jonouchi cards , the anima magics

All the magics have a line that divides low rank magics and high rank magics.

Usually their have an extra lore.

In the case of light it is the Solemn cards.
So light magics between E-C are related with divine light and between B - S solemn power
Solemn Warning, Strike and Judgement

Anima magics in WnM , the anima it’s way depending on the creature. Winged Magical creatures learns wind magic that has some critical possibility just like FE.
And Fire Mágics are just like fire emblem and they are equal E-C
Now the B-S anima magics are pure Electric
Electric it’s way associated as Fire evolution
And they are the more ranged magics and they have the most critical possibilities associated with cards that immediately destroy monsters
They are
Lightning Vortex, Lightning , and Lightning Storm

Last but not least
Dark magics they are based on cards that change stats
We have in WnM the dark magics between E-C ALL of them having 0 of Might but they are very lightly and they ALL have side effects not like the rest of the magis
And also the B-S dark magics are related to death
They are
Black Hole, Curse of Anubis and Judgement of Anubis
They do have might , the only dark magics with an amount of Might

So I literally change all the magic Triangle and I want to clear to this fandom
That i would like you to play my project thinking about something new, not a usual FE cause it isn’t , not in sprites , animations , classes , not even magics.
I want to bring you all something new , something different.

I think ygo players gonna get these references and fe players to give it a chance and try it out
I will give my best effort to make it enjoyable for all of you.
Sorry for my English , I hope I explained enough the reason why of my reversed magic triangle :3

Wouldn’t it still make sense with the traditional FE magic triangle? I haven’t watched much of the YGO anime, so some of my knowledge may not be accurate.
Kaiba generally has an advantage over Yugi, but Yugi still manages to win. You could show this by giving Dark Magician a “reaver” spell that is strong against light. That way it is closer to FE gameplay while still having the YGO lore.
As for Jonouchi, he also has Red Eyes Black Dragon which is considered Dark affinity in the card game. Flame Swordsman is still his most iconic card, but Kaiba having a Light Dragon over Jonouchi’s Dark Dragon still fits the lore as well.
In terms of Yugi vs Jonouchi, I’m not sure. I haven’t gotten to the point where they have a real duel yet…
But anyways, I found a link on “Alignments” in early YGO that may be helpful. The main hierarchy is as follows: Black>White>Demon>Illusion>Black
You could combine Black+Illusion into Anima, then rename Demon into Dark to keep it in line with FE. But I don’t know what cards you have planned, so that might not work. (Although I think Dark Magician is actually considered Black Alignment, so it still might not work)
EDIT: You don’t have to work with just 3 magic types in the triangle. You can make Staves part of it as well, so Light stays as Light, Dark becomes Demon, Anima becomes Black, and Staff becomes Illusion. If it’s all renamed, people will probably pick it up easily enough even if they’re used to FE. 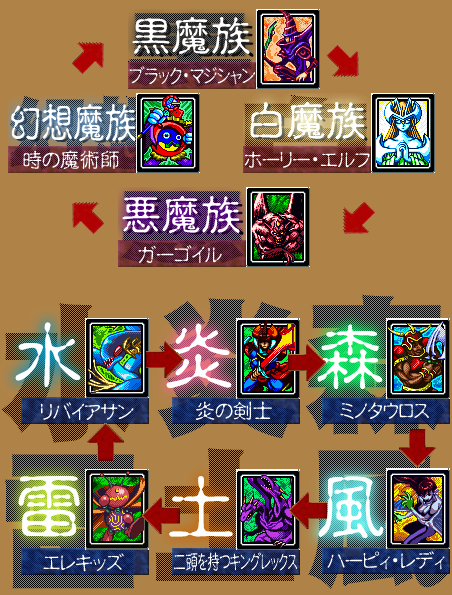 Alignments are a card property seen mostly in the earlier Yu-Gi-Oh! video games. Although not referred to as such, their earliest mention was in the manga during Dark Yugi and Maximillion J. Pegasus' TV Duel. Alignments then served as a major game...

That circles are from the first games and are based on monsters. And i am basing on cards.
Solemn cards are just very powerful.
Yes Kaiba has “some advantages” on yugi
It has more powerful cards
Here still light magics are the most powerful
But dark magics has advantage over them
Anima it’s just in the middle as always
And well it’s also for those first games
Dark magic in ygo always has beating light magic ,while light magic beats demons magics
And I still want to respect that in my project
Otherwise I think many games has the Light <-> Dark contradiction and their wins against the other.
Having the normal FE magic triangle would be just bored imo and reversed would make so much sense in this ygo project
Edit : in ygo
Black Magic it’s refered to FF Black magic
Light Magic its you know light
Illusion it’s magic that plays with your stats ( staves)
And Demon magic it’s refered to the evil magic.

That’s still the concept of anima
So I’m sure they way I’m doing the things it’s the most representative and respectfully to YGO.