Ok, so this question came to me based on a recent Romhack and I wanted to send out feelers to see if anyone has the know-how or if such a thing is too advanced.

Using either FEBuilder, Lex Talionis, or Tactile, is it possible to have Genealogy-style parent/child stats? What I mean by this is can I make a game using either of the 3 tools and have it split between 2 generations where units you get in the 2nd generation have stats based on their parents. I figure if a SNES game can do it then the GBA must be able to but digging around I couldn’t quite figure it out. Grant it I’m a super noob so I could be missing something super simple.

I could see it being done if you combined these two patches. 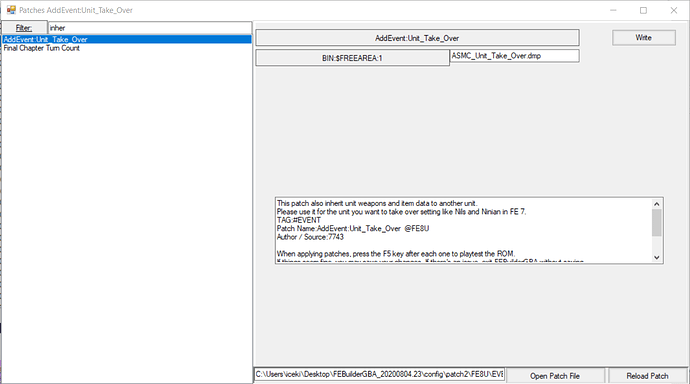 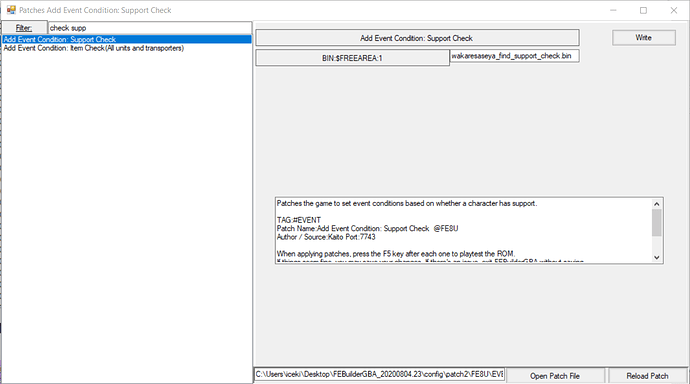 You would have to build different versions of the child units in the character editor and then have the one that corresponds to the player’s pairings spawn based on the support check.

Oh! Thats awesome! Thank you for sharing that.

It is doable in tactile as well since it was mentioned
There’s already a stat check inheritance (it exists, I have not personally used it) and obviously you can tailor units around parents

To add on to @Permafrost’s method, one downside is that your second gen units would have very limited support options (If you care about that). Every unit can only have up to 7 partners, so attempting to support two child units with all possible parent combinations could be troublesome.

Unless there’s some kind of support patch in FEBuilder that expands this limitation, but I couldn’t find anything myself.

That’s true. I didn’t think of that. If you go the FEBuilder route, you would probably have to limit supports to siblings, units with set parents, and any non-child units who are part of the second generation.

If you really wanted to get into the weeds, you could try making the child units’ classes depend on their parents and use the Modern Growths patch that makes growth rates function as Character Growth + Class Growth. If you aren’t going to have monsters or anything, you could try giving each child with variable parents his/her own class that would determine his/her growths (as in having multiple copies of the Myrmidon class for a Myrmidon child and just load them in as the one that corresponds to his parents). That way you might be able to get away with only having one version of each child unit as far as character slots. You’d probably run out of class slots before you could make that work though.

Going off of the one unit per class thing. That would be pretty cool and one could probably implement hair color change or something specific that shows who at least the male child belongs to. Supports would be challenging with the limit of 7.

Going off of the one unit per class thing. That would be pretty cool and one could probably implement hair color change or something specific that shows who at least the male child belongs to.

If you want to have different hair colors while only using one character slot for each child, you can use this patch. 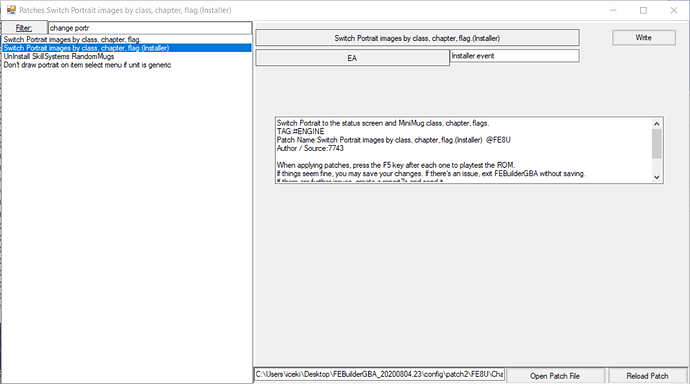 You can assign a global flag to each pairing and switch the child’s portrait based on that flag being set. Just know that if you want to use this patch alongside Skill System, you have to run “Uninstall SkillSystems Random Mugs” which is below the patch in the screenshot.

However, unless the portrait is loaded through the ffff setting, which loads the portrait of the current active unit, creating dialogue sequences would be very complicated as I can’t think of a way to ensure that the correct portrait is loaded unless you make multiple copies of each dialogue sequence with different combinations of children portraits and then check all of the pairing flags to ensure the right one is loaded. And I think that for supports, you would be stuck with whichever portrait is in the dialogue assigned to the character’s supports.

So it might be better to have the children look the same regardless of parentage.

For things like talk events, it would be simple enough to have multiple copies of the same conversation with different portraits based on the parents of the child. It would be kind of annoying and tedious to set up for every conversation, but it’s not too tough.

And I think that for supports, you would be stuck with whichever portrait is in the dialogue assigned to the character’s supports.

FEBuilder does have a patch that lets you set events within support conversations which could let you get around this issue, but I’m not entirely sure how it works.

Support Event1077×523 26.1 KB
From the looks of it, you’d need to have the “Get Support Level” patch as well to see what level of support the characters have at the very start of the event. Then, you’d branch off depending on what Global Flag is set (Based on their parents, of course).

The real headache comes from supporting two non-related child units together. Even if two children only have 4 total parent combinations, you would need to have 16 conversations per support level. That’s 48 conversations for 2 characters.

That’s true. If you just want to do something like have the lord’s portrait change for his promotion, you can toggle between Eirika and Ephraim mode to ensure that the right portrait appears in death quotes, but for something where a unit might have four or five variants, that wouldn’t work. You could probably set something up by ordering all the variants of unit’s death quotes in a specific way and turning off the ones you don’t want with global flags, but at that point I think you’re making setting up some of the game’s most basic functions much more complicated than they really should be. And that assumes that no units with variable appearances would need to have their death quote set the game over flag.

That’s just one of the unfortunate things about romhacking; sometimes you have to go for the best approximation of what you want rather than exactly what you want. I still think you could make a cool multi-generation hack with what’s available though.

It does sound like there’s a lot of cool options. I need to get myself familiar with all the patch things. It always seems like there’s something in there I never knew about