Hello! I’m usually a lurker, but not today!

So, I made this elaborate self-imposed Pokemon challenge themed around Fire Emblem, and have been playing it for about half a year. If it were a rom hack, it would look like dis: 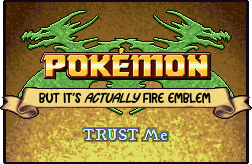 Almost but not quite as funny as I, Elf Member, I know. My challenge is really elaborate, like, 18 pages of RPG mechanics elaborate. I spent a lot of time meticulously writing it, and I’m hoping people will notice it and get as much enjoyment out of it as I do, once I post it around. I wanted to post it here since I thought it’d be relevant to the community, but I’m not sure how to categorize it, since it’s sort of a Project, but it isn’t a rom hack. If someone could help me with that, it’d be much appreciated.

I’ve also been interested in making an FE rom hack for a while now, though in my last attempt, the coding wizardry of the FE8 skill system pack was a bit beyond me. I could see myself giving it a second try sometime, or maybe just posting some pixel art resources.

Anyway, happy to be here, amongst the wizards.

And another one has fallen down the rabbit hole.

Is this a pokemon hack, with FE elements, or a FE hack with pokemon stuff?

It’s neither. It’s a self-imposed Pokemon challenge themed around Fire Emblem, like Nuzlocke or Chesslocke. I’d be posting a PDF of a text document full of rules the player follows whilst playing Pokemon. All the rules are meant to mimick Fire Emblem mechanics (Pokemon roll for various attributes like classes and archetypes, they have support ranks and affinities, you have to perform random stipulations in order to ‘recruit’ Pokemon, that kind of thing).

So a pokemon challenge run

also i think you tried Pokemblem already, but let me know if you have any feedback / suggestions for it