The code-name actually has no meaning aside from being a callback to a previous project.

On Sunday, I put the project on hold and started a break to give myself more study time for some exams that were set to be yesterday and today. Time limit or no, studies come before gaming stuff.
… However, today saw my classes being canceled because of snow, which postponed the exam.

Release is tomorrow at the very latest, although I’ll give an earnest effort to get it out within the day!

… Wait, I can explain!
When it came down to it, I realised that I had the choice of either releasing three rushed, low-quality chapters, or one polished, maybe-decent chapter. I opted for the latter.

And so it ends up that I achieved my goal about halfway: I couldn’t hammer out the full product in a week, but I can hammer out a fairly polished chapter. Adding chapters after the first isn’t nearly as much effort because most of the characters and game mechanics are already in place.
The download link is in the first post!

I do intend on seeing the project through to its full length of three chapters, but I needed the weight off of my shoulders for now. After this, there’s one more project that never moved past half of a chapter that I want to finish as a one-chapter mod and release it, and then I’ll be going back to work on my main project.

The story of the game is a means to the end of having gameplay, by the way. Try not to roll your eyes too much or they’ll fall out of your head!

Try not to roll your eyes too much or they’ll fall out of your head!

im an optometry student and this is totally a thing

Ohhhhh, the Amulet is spiffy.

“Gaiden” may mean “side-story” in Japanese, but it means “under-appreciated” in the constructed art-lang that I just contrived about ten seconds ago. It’s a wonder how much a tempo change and one extra track helps FE6’s FE2-songs sound much more faithful.

The Amulet(s) is/are the number one reason why it’s a shame I couldn’t release more than one chapter. Ch2 is almost guaranteed to be an insane festival of jumping from class to class just as soon as you’ve gained enough stats to do so. And yes, I did think about stats possibly going lower than 0 and looping to 20 and balanced the bonuses/penalties so that hopefully won’t happen. I think I needed to use something like three entire amulets on Indigo before it started happening to her.

Gave it a try tonight. I enjoyed what I played, though I haven’t tried Ch1 Hard. I’m not sure I’m the biggest fan of all the crit chances on the tomes, especially when characters are this low level. The last blow against Aris could have gone very poorly but I got lucky. Same goes for the Red Sword merc.

I’ll have to go back and mess around with the Amulet, it sounds fun.

I do intend on nerfing that mercenary (and giving the color-weapon to some other enemy) and nerfing the crit chance of at least Fire/Bolt. Fulgur has so much because spirit was originally intended to be the critical-hit magic type, but somehow all the crit chances just ended up increasing across the board. Gust has the crit chance because it barely does any damage to your units by the time you reach that mage.

Being someone who gets critted by generic enemies way too often, I figured that restarting the chapter wasn’t too much of a pain thanks to how compact it is and so added some more risk. I’m not defending why I did it, but it’s an explanation.

Glad you enjoyed it!

The small pertraits are quite cute:

A fighter can double a mercenary?(Red sword is really heavy~)

It is time to KO Boss now:

The first time is difficult to some degree but the next is quite easy. A pretty interesting hack.

I’m actually not sure what caused this… I guess I accidentally overwrote graphics where I thought there was free space. I meant to entirely get rid of the class previews in the title screen, so I’ll see if I can do that.

This glitch is entirely my fault, though. It’s caused by the hex edits that I made to make the windows that normally show up there transparent— I thought I had fixed it everywhere but I didn’t see it there because I never leave the R-menu on the weapon levels when closing/opening it, so thanks for letting me know.

The small pertraits are quite cute

A fighter can double a mercenary?(Red sword is really heavy~)

I admit both of these things are badly balanced— I made Elgin speedy because he wasn’t hitting anything, but I honestly should’ve just made him a lance user instead (might do that next demo and make Fighter be his first re-class instead).
I will definitely give the mercenary a different-colored sword (so he isn’t strong enough to 1HKO poor Indigo χ_X) and move the red sword somewhere else next patch.

Thanks, dude! I enjoyed that. There’s some stuff you missed, but it can wait until the next episode.
And speaking of what’s next… 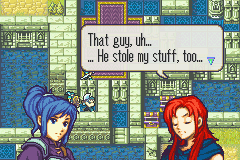