I’ve been interested in the early days of Fire Emblem ROM hacking for a while now, and recently I’ve been doing some serious digging. The issue is that there is only so much information I can find myself, and I know there are some people who frequent this forum that were around during the dawn of FE hacking, who might be able to help me out on this weird quest of mine.

As far as I can tell, Iggy’s FE7 Hack: Nino’s Adventure seems to be the oldest ROM hack that attempted to provide a custom experience (please correct me if I’m wrong). Here is a thread I managed to find dating all the way to 2004: (https://fessforum.proboards.com/thread/863/fe7-hack-ninos-adventure). All the images are broken, and its unclear if a patch was ever released. If anyone has any screenshots, or recollection of this hack I would be happy to get any additional information about it. And if a patch was released and someone has it gathering dust, I would be extremely grateful if you could share it with me.

There are a couple of other hacks that I am interested in getting my hands on. Nintenlord Saga and Blazer’s Prince of Durand are both of interest to me. Both of which don’t seem to have working download links anywhere. There also appears to be a several chapters long hack made by Pukachi/SpyroDi that @Lamia mentions in this thread: (https://forums.serenesforest.net/index.php?/topic/59682-rarest-fe-rom-hacks/). A download link was provided to it, but it no longer works. I have Pukachi’s other hacks (Eliwood vs Everyone and her contest hack), with her 1 chapter contest hack still being one of my favorite hacks to replay. So I am very curious about this lost hack of hers, even if it is just “3 very hastily done chapters”. This is because I am mostly interested in the technical accomplishments of these early hacks than I am in good game design.

I’m also more than happy to have this thread foster discussion about the old days, and the accomplishments/credits that certain pioneers deserve to be recognized for. I know Iggy was quite important very early on, but I can’t find much information about his contributions aside from some super old posts on the archive of FESS. I also know that documentation from Zeld, Pukachi, and IcyToast was instrumental to a lot as well. IcyToast in particular I find interesting because I know he made an excellent early tutorial on hex editing, map insertion, and event hacking and then just disappeared from the scene around 2007/2008.

Wow seeing an archive of a proboards site from 2004 is incredible. Thanks for sharing this.

I don’t know anything about this hack unfortunately. I didn’t really explore hacks much until around 2010 where I dabbled with Tactics Universe and Ostian Princess.

I did peruse Serenes Forest recently and found a link to another forum that hosted a file called “foal.ups” - i forgot to check the proper name, but it appears the forum is gone now. Can send that to you if you like.

I did peruse Serenes Forest recently and found a link to another forum that hosted a file called “foal.ups” - i forgot to check the proper name, but it appears the forum is gone now. Can send that to you if you like.

Yes, I would be interested in that if you don’t mind! Do you have any idea around when this patch was created or any info to go along with it?

Wow seeing an archive of a proboards site from 2004 is incredible.

It was pretty fun reading some of these really old posts to get an idea of how things started. In that thread (or it might have been another), Iggy mentions what a pain in the ass it was to edit text since it was all compressed. Something quite interesting, since even by 2007 thanks to certain tools, text editing seems to have been made relatively painless.

Yeah I imagine that being able to undo Huffman encoding opened up text editing.

I don’t recall much - the forum disappeared a week or so after I pulled it, I’m guessing the site it was hosting on was set to expire. Was fortunate timing, or else this would’ve been lost to time.

I don’t recall any information about the title, unfortunately. I recall just downloading anything unique I could find to see if there was anything cool.

I vaguely remember downloading a file with the same name once, ages ago. I also had a bunch of older hacks on my laptop, pretty sure i played part of nintenlord saga. Unfortunatly my laptop broke down and i haven’t used it in like 5 years. It never really occured to me but i could try seeing if i could somehow access the harddrive and see what i can find. Also, please let us know what hack that foal ups thing is

Update: got the Hard drive out and it seems to work so far but its a bit slow. I’ll let you know what i find

I saw a comment on your thread on SF about this topic about my comment in the Rarest ROM Hacks thread about PZ Ribbon (unfortunately, I am locked out of my SF account from when they did the changeover away from Username logins…). I tried looking it up the other day and it looks like it’s been lost to sites disappearing, but there is still a playlist of someone playing it on YouTube: https://youtube.com/playlist?list=PLC259B5745624E38D

For the historical standpoint, while I didn’t join the FE community until 2005-2006ish, VincentASM and NomadicTrooperGirl deserve some recognition for their discoveries into editing graphics for the GBA titles - I remember VASM launching one of the early endeavors into putting custom portraits into the ROMs and dealing with the mouth and eye alignments by soliciting portraits from users to use as the test insertions, and NTG posted the Bork Hack video with custom CGs (https://youtu.be/NIVS8yqX9UE).

DarkTwilkitri (and a team of others working with him) was heavily involved in the original FE6 Translation, though I don’t remember much of what that involved other than a meme that ran about back on FESS’ IRC board back in the day of one of the team members needing them to ‘insert the bins’ to get some of the data/graphics for the translation inserted into the ROM.

Going to tag @Celice here since they’ve been around longer in the community than I have and might remember any other important accomplishments and credits that I may have forgotten over the years?

Donlot, there was a comment on the SF Rarest ROM Hacks thread by Primefusion that mentioned that the title for Foal was “Father of a Legend”. No idea what it actually entails as a project, but…

The earliest FE hacking I know of was in 2000, as that’s when J2E’s translation of FE4 was made.

I managed to hook the Hard Drive up and it seems to work, although some files seem to be missing. I’ll be uploading it to Google Drive and updating this post with what i find. Here’s what i found in regards to FE:

I checked some of the unfamiliar faces out.

FE8patchfinal2 is just fe8 with huge stat inflation.
FE8MonsterQuest is FE8 but non-lords are monster classes.
fereunion is fe8 but characters are from other GBA games despite the names being unchanged from vanilla.
Elibe 776 is FE7 with inflated stats. Couldn’t really check anything else out, the tutorial is unbeatable because the brigand who’s scripted to hit Lyn OHKOs her.
The FE2 hack buffs all bases and growth rates by 16 and takes out the obtainable Angel Rings.

I already posted these on the Serenes thread, but I’ll post them here too for posterity. I’ve got a handful of the patches you were looking for. Namely:
Nintenlord Saga
MK404FE7
Pukachi Patch

My memory about Father of a Legend is super hazy. But if I remember right, they were trying to create an avatar character whose class you could choose after answering a series of questions (I think).

I also should have a more recent semi broken harddrive which may have some other hacks on it, although it has a read/write speed of like 20kbps and i’m gonna have to find it first. I’ll let you know if i manage to check it out and find anything else on there

Here’s some of those tutorial images for inserting custom portraits 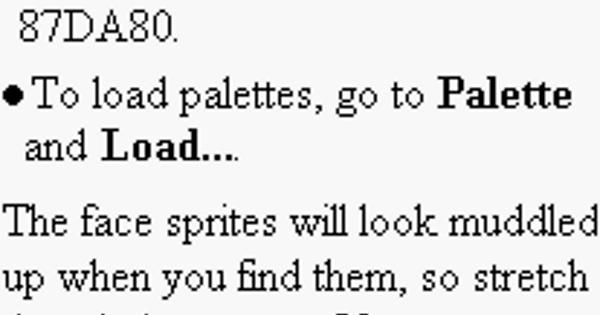 I remember learning about unlz-GBA from Xenon Xenesis at one of the earlier acmlm romhacking boards, and sharing it on FESS. That and sharing Nightmare with FESS helped make early hacking efforts a little more accessible to more people.

At some point, a romhacker named Squash Monster had created the first full Yoshi’s Island level editor, named Eggvine. It didn’t have an graphic support at first but it was a very popular and interesting tool. This same user had an interested in FE8 and started to create a full game editor for it as well, but I don’t believe any public build was made available

It was called Firevine I believe.

Iggy was the earliest concentrated romhacker for Fire Emblem that I knew of, from English sources. I’m sure Chinese fans and Japanese fans may have had more things I never knew about.

Not a hack, but an old forum.
The link is dead because the domain was changed from .net to .com
But there’s nothing worth there since I have my own post here, and the FE7 project is dead.

That actually makes sense, i knew about the wod forum but i didn’t connect that that was just the abbreviation for Wars of Dragons

Thanks for all the responses!

@Celice Thank you so much for uploading that tutorial on custom portraits. Do you have a rough idea when it was originally dated? Would this be before or around 2006/2007?

@LordGlenn Wow, I’ve never heard of the Bork Hack, that was a treat to see. There is an earlier video on that channel that features Bork uploaded in 2006, and the other one is from 2009. The 2009 uploaded you linked to featured a hacked intro which is quite impressive. Are both hacks originally from 2006, or is the 2009 video an update? If you remember anything more about this I’d be very curious to know.

@Donlot Huge thanks for sharing all those!

Re: custom portraits, I’m not sure for that exact tutorial that Celice linked, but for the earliest “Face Sprite Project” (as named by VincentASM) that I have, my file for what I submitted was dated as 2005. It’s a little more rudimentary with the eye/mouth alignments (vertical slices only), so it’s possible that tutorial file was from one of the later attempts of that project (or that I didn’t fully understand all of the alignments back then). (Face Sprite Project 3 was dated to 2006 with what I have in my files.)

For Bork, I’m pretty sure that the 2009 one was actually done later than the previous video it references. The 2006 one was mostly just editing battle sprites which wasn’t terribly difficult (until people started wanting to add new things instead of editing or replacing the existing animations - which I think Zeld was the first one to (publicly) solve when MK404 needed a second Sage animation that didn’t affect the other Sages in the cast?). The intro scroll and CGs were viewed as much more difficult (note how many earlier hacks still had the default FE7 intro and how, for example, MK404’s hack used the existing CGs and even forced events in places where they originally were), so it being from a later work makes sense to me.

if someone have Death or Glory and Devourer of World? Can sharing it for me please? :<